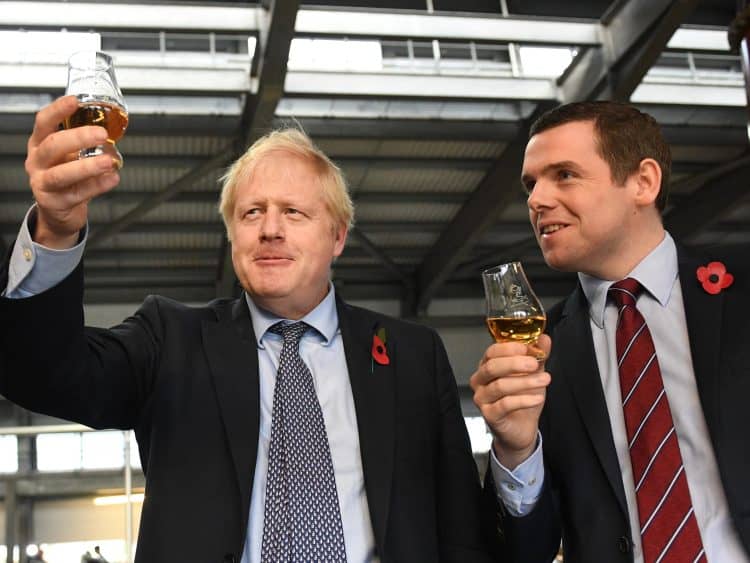 Scottish Tories have told their MPs to remove the “politically gangrenous” Boris Johnson after the prime minister undertook a low-key tour of Scotland this week.

During a visit to Rosyth Dockyard to see the construction of new Royal Navy warships on Monday, Johnson was snubbed by Douglas Ross – the Tory leader in Scotland – with norther senior party figures accompanying him.

Ross was one of the first Tories to call for Johnson’s resignation over the Partygate scandal – but, in recent days, their relationship appears to have thawed, with the prime minister invited to virtually address next month’s Scottish Tory conference.

Nearly every Tory member of the Scottish parliament has publicly echoed Ross’s call for Johnson’s head.

“Despite the prime minister rightly highlighting the government’s levelling-up agenda in Scotland, he is increasingly being seen by party members as a politically gangrenous limb, which, without some form of intervention, [means] serious electoral consequences may follow very soon,” a Conservative source told The Times.

“There is also increased frustration with Scottish Conservative MPs’ inability and seeming unwillingness to articulate party members’ concerns over the recent behaviour of the prime minister.”

Ian Blackford, the SNP Westminster leader, claimed Johnson was “deeply unpopular” with Scots – and said this week’s visit should be part of a “farewell tour”.

Johnson insisted on Tuesday that he “of course” can lead the Tories in the next general election, despite ongoing questions over his leadership linked to lockdown parties in Downing Street.

Asked whether he believed they will both lead the Conservatives into the next general election, Johnson said: “Of course.”

His comments came as he again made clear his view that Scottish independence is “just not going to happen”.

The prime minister told the Daily Mail newspaper that over the course of the Covid pandemic, “Scotland and the whole of the UK has benefited massively from the might of the UK Exchequer”, highlighting the impact of schemes such as furlough.

He declared: “I think most people could see that it would be an economic disaster to split up our country. That is why it is just not going to happen.”

Speaking about the Scottish Tory leader, he insisted that Ross “has done a very good job indeed of leading the Scottish Conservatives”.

In the 2021 Holyrood elections he said that Ross won “about 100,000 more votes than any previous Scottish Conservative leader” and had also “stopped the Scottish National Party from getting the outright majority that they thought they could get”.

Johnson added: “Every day Douglas gets up and campaigns for the Union of our country in a way that is absolutely passionate and I totally share.

“All I would say is there is far, far more that brings us together than separates us.”

Related: Nigel Farage has called for another referendum