The environment secretary said 800 butchers would be invited to come and work in Britain for six months. 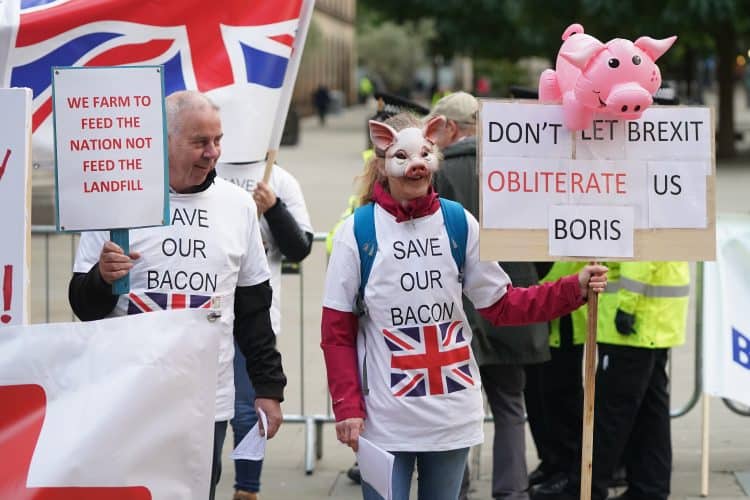 The government will allow butchers to enter the UK on temporary visas to counter the crisis on pig farms, as reality continues to chip away at its post-Brexit immigration policy.

Butchers in abattoirs and meat processing plants dealing with pigs will be allowed to come and work in Britain for six months, George Eustice – the environment secretary – announced on Thursday.

He revealed 800 butchers were needed to address staffing shortages and bring the situation under control.

“That will help us to deal with the backlog of pigs that we currently have on farm, give those meat processors the ability to slaughter more pigs, and crucially as well we are going to make available what is called private storage aid to help those abattoirs to temporarily store that meat,” Eustice said.

It comes after warnings that up to 150,000 pigs could be destroyed as waste as the labour shortage in meat processing has led to a backlog of animals ready for slaughter.

Under the plans, there will also be funding for additional meat storage, moves to introduce processing of animals on Saturdays and the potential for longer working hours.

Bradshaw told Times Radio: “We really welcome the recognition of how serious the issue is. The 800 visas is a step in the right direction that will really help to get things back on track. And I guess, for us now, the critical thing is how quickly can we get those butchers over here?”

He added: “I’m pleased that however challenging its been, we know George Eustice has really been fighting the corner for the industry. He’s managed to get this over the line. And we just now need to implement it, as I say, as quickly as possible. And there can’t be any delays in getting those visas out.”

Up to 800 pork butchers will be eligible to apply for six-month visas from the existing allocation in the Seasonal Workers Pilot Scheme up until December 31.

The government said the move is temporary and is in addition to foreign butchers already being eligible since December 2020 to apply to come to the UK through the existing skilled worker route.

In addition, a fund will be set up for a private storage aid system in England to allow meat processors to store slaughtered pigs for three to six months so they can be preserved and processed at a later date.

Details of the fund will be announced shortly, the government said.

A spokesperson for the National Pig Association said: “We are so very relieved that the government has finally released some measures aimed at reducing the significant pig backlog on farms.

“We are working with the processors to understand the impact of these new measures and to determine exactly what will happen now, and how quickly, so that we can give pig farmers some hope and stem the flow of healthy pigs currently having to be culled on farms.”

Related: ‘They talk but don’t do’: Queen slams climate ditherers in leaked audio