From the newsletter: Another chapter in the long overdue search for justice for Giulio Regeni opened in Rome this week. 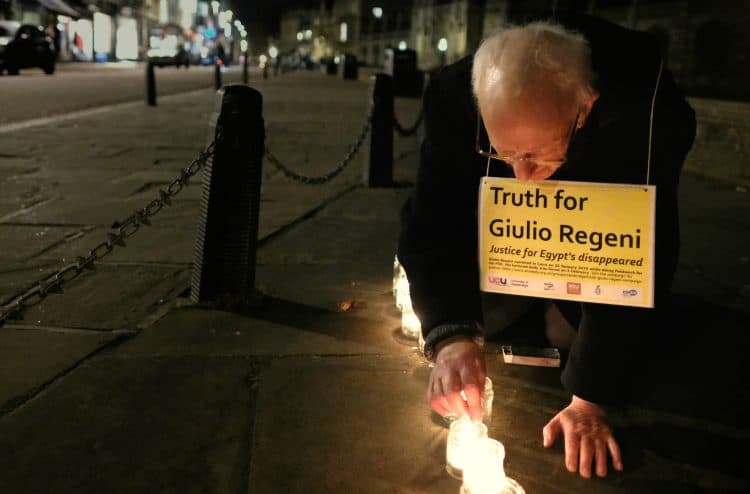 Good morning. A little before 8pm on 25 January 2016, Giulio Regeni – a 28-year-old Italian doctorate student at Cambridge – left his flat in Cairo to meet a friend at a cafe near Tahrir Square.

Nine days later, in the early hours of the morning, a bus driver traveling on the Alexandria Desert Highway in the west of Egypt’s capital city spotted something on the side of the road. When he pulled over, he discovered a body – naked from the waist down, caked in blood, propped up against a wall. It was Giulio. He was missing teeth and cigarette burns were seared into his skin. There were deep wounds on his back and his right earlobe had been sliced off . Bones in his wrists, shoulders and feet were shattered. An Italian autopsy later confirmed he had been burned, beaten, stabbed and flogged for four days. He died when his neck was snapped.

Yesterday, five-and-a-half years later, a court in Rome begun a trial of four Egyptian security service officers accused of Giulio’s kidnap, torture and killing. First to arrive at the high-security prison where it is taking place – in a courtroom built to try mafioisi – were his parents, who waited flew to Egypt after his disappearance and waited days for news in his apartment and were only able to identify their son by “the tip of his nose”.

I was at Cambridge when Giulio was killed – he was a postgraduate student at the college where I was doing my undergrad. The shock was stark. Fascinated by the Arab Spring, Giulio had been in Cairo researching his doctorate under the supervision of a noted Egyptian academic, studying the city’s street vendors – assessing whether they might be able to drive socio-political change in a country where the push for democracy hadn’t stalled so much as gone into reverse under Abdel Fattah el-Sisi. But it wasn’t until I moved to Italy a year or so later that I realised how deeply Giulio’s death had been felt. In Florence, where I was living, a huge banner fluttered in the shadow of Brunelleschi’s Duomo, in the city’s central piazza. Verità per Giulio: truth for Giulio. It was there when I arrived and remained when I left a year or so later. This wasn’t just a diplomatic crisis. For Italians it was – and still is – profoundly personal.

Egypt has refused to acknowledge the trial, closing its own investigation last year. Cairo has stonewalled and obfuscated – failing to provide vital evidence, refusing to supply the addresses of the four men charged, preventing Italian prosecutors from officially informing them they are on trial. They are thus being tried in absentia – causing Roman judges to suspend the trial yesterday, after hours of deliberations over whether it was fair for the accused to be tried from afar.

Any hopes for tangible justice seem far-fetched, but that doesn’t mean the trial is irrelevant. If the case returns from the lower court to which it has now been banished while efforts to contact the four Egyptians are redoubled, prosecutors will detail how Giulio was arrested and taken to a police station in central Cairo. He was then transferred to a facility run by the powerful National Security Agency (NSA) – who trapped the student “in a spider’s web” of surveillance in the months before his disappearance.

The trial – if it ever happens – should shine a light on Sisi’s surveillance of everyday life in Egypt, and provide an unprecedented insight into the inner workings of the NSA. For while Giulio’s case may be the most visible example of a state-sanctioned atrocity, his fate is hardly unique. The Egyptian Commission for Rights and Freedoms has tracked 2,723 cases of forced disappearances between 2015 and 2020. This is a rare opportunity for accountability – if not on the ground in Cairo, then in the pages and bulletins of the world’s press.

Whether that brings any balm to Giulio’s family is unknown. But it might inch closer something they – and millions of Italians – have sought since that January night in 2016: verità per Giulio.