The newly-appointed prime minister also looked pretty glum as the Labour leader tore into him over his wife's previous non dom status. 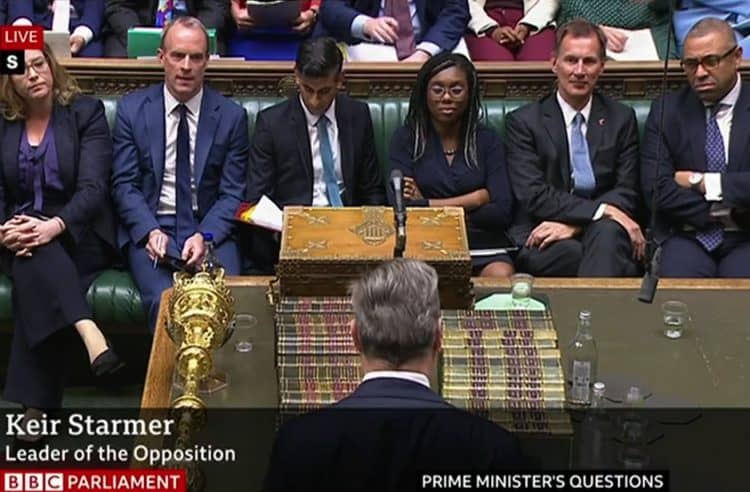 Rishi Sunak clashed with Sir Keir Starmer for the first time in the Commons a day after being appointed the country’s new Prime Minister.

Fresh from assembling a new Cabinet, he was grilled over the controversial return of Suella Braverman as Home Secretary.

Mr Sunak and the Labour leader traded barbs about “never leaving North London” and about getting beaten by a lettuce in the lively session, cheered on by animated MPs.

Here are some of the key moments from the exchange.

– Lost to someone trounced by a lettuce

Sir Keir quipped that new Prime Minister had lost the last Tory leadership contest to Liz Truss, who was outlasted by a lettuce.

The Labour leader said: “Even his own side know he’s not on the side of working people. That’s why the only time he ran in a competitive election he got trounced by the former prime minister who herself got beaten by lettuce.

“So why doesn’t he put it to the test? Let working people have their say and call a general election.”

Mr Sunak’s predecessor resigned after only 44 days in the top job, with a lettuce recorded in a live stream by the Daily Star lasting longer.

But the warm introduction did not last long, with Sir Keir going straight in with a pointed attack on Mr Sunak’s reappointment of Ms Braverman to the Home Office.

Asked whether it was right of her to resign last week for a breach of security, Mr Sunak said she “made an error of judgment but she recognised that, she raised the matter and she accepted her mistake”.

Not letting up, Sir Keir then challenged him over whether officials raised concerns about her appointment.

But Mr Sunak dodged the question, leading Sir Keir to accuse him of doing “a grubby deal” in order not to lose another leadership election.

“There’s a new Tory at the top but as always with them party first, country second,” he said.

Sir Keir opted to confront Mr Sunak with a matter that dogged him as chancellor – his wife Akshata Murty’s previous “non-dom” status for tax purposes, an arrangement that reportedly saved her millions while the cost of living soared.

Calling on the Government to get rid of the status, the Labour leader said: “I don’t need to explain to the Prime Minister how non-dom status works, he already knows all about that”.

The question appeared to take Mr Sunak, arguably the richest PM with a fortune far larger than the King’s, somewhat by surprise.

Bringing up another awkward issue for Mr Sunak, Sir Keir challenged him about a leaked video from over the summer in which the then-Tory leadership hopeful told party members in Tunbridge Wells that he had moved money from deprived areas to wealthy places like theirs instead.

Mr Sunak evaded the question about changing the funding formulas by saying there were deprived areas in “our rural communities, in our coastal communities and across the south”.