"He beat Keir Starmer to it," one person commented. 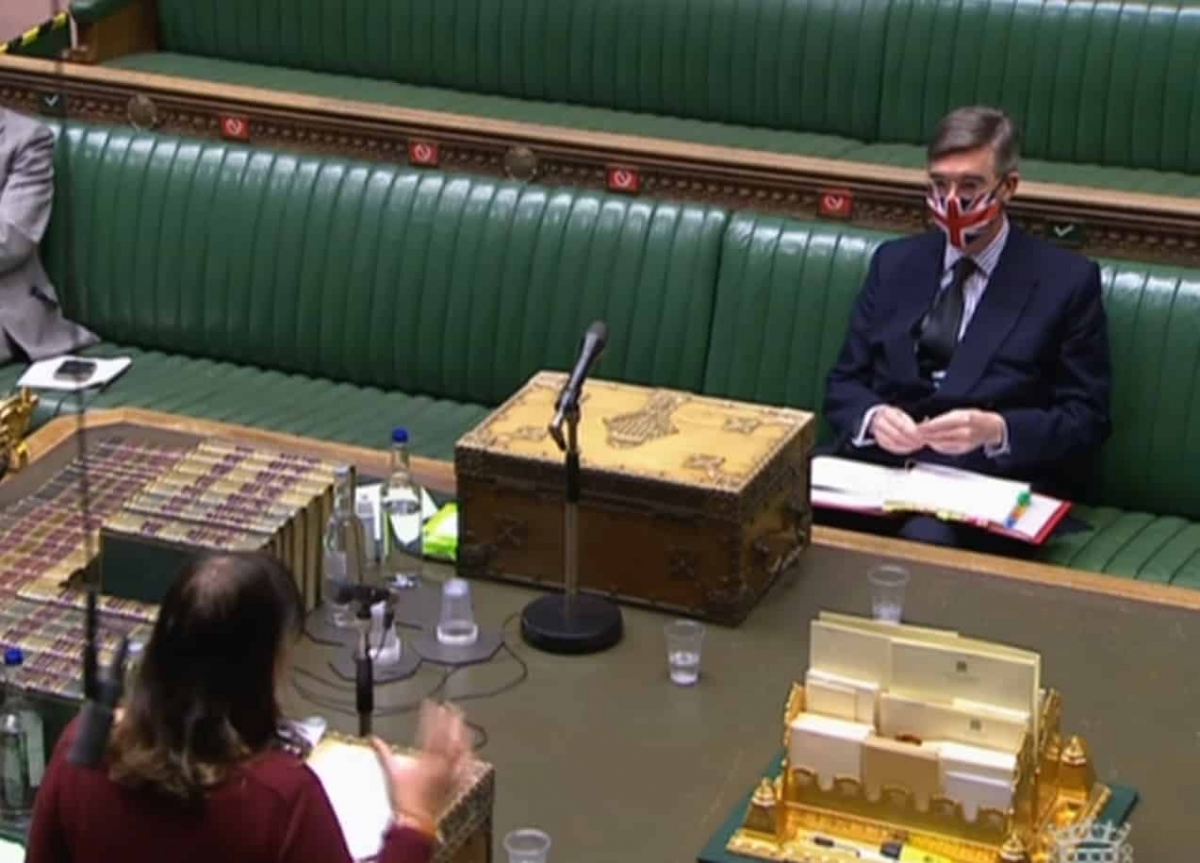 Jacob Rees-Mogg was spotted wearing a Union Jack face mask in the House of Commons today as the government’s ‘flag fetish’ ensues.

The leader of the house decided to ramp up his patriotic brand of politics during Business Questions by covering half his face with the flag in a move that has been described as “cringe” on social media.

It comes on the back of a leaked Labour strategy document which urged the party to use the union flag more often to win back the Red Wall, leading one person to say: “He beat Keir Starmer to it”.

Earlier today Rees-Mogg hailed the “courage” of an SNP MP “sacked” from her frontbench role, as he suggested “internal SNP politicking” was behind the decision.

Ms Cherry stated she was “sacked” and later contacted police over a “vicious threat” she received online from a man.

Commons Leader Mr Rees-Mogg heaped praised on Ms Cherry and defended her right to put forward her views on “difficult and sensitive” issues.

The SNP said Ms Cherry was removed from her role because of “unacceptable behaviour” and denied it was to do with views she holds.

Ms Cherry told the Commons on Thursday: “Across our society, and particularly in universities and the third sector, women and some men are losing their jobs, having their positions undermined and their personal safety put in jeopardy simply for questioning the ideology that any man can self-identify as a woman, and for speaking up for women’s sex-based rights under the Equality Act.

“Does the Leader of the House agree with me that all democrats should condemn such attacks on free speech, and can we have a debate about free speech and the importance of sex as a protected characteristic under the Equality Act?”

Mr Rees-Mogg said he was “sorry” Ms Cherry was no longer on the SNP frontbench, adding she was “one of the most intelligent and careful scrutinisers of Government” in the Commons.

“Loss to our democratic system”

He also said: “As I believe good government depends on careful scrutiny, her removal from office is a loss to our democratic system.

“Dare I say, perhaps ungraciously, that Moanalot is responsible for this and it may be for reasons of internal SNP politicking.”

The nickname “moanalot” is one Mr Rees-Mogg has previously used for First Minister Nicola Sturgeon.

He added: “Free speech is fundamental, and it is disgraceful that (Ms Cherry) received threats for her views and from her removal from office, to the extent that the police had to be involved.

“Every member of this House should feel safe in whatever they say, as long as it is within the law and it is not effectively threatening violence.”

He added: “It is outrageous that (Ms Cherry) should have been placed in this position.

“And can I commit to supporting freedom of speech? Absolutely, I can. This is what this place exists for, that’s what underpins our democracy.

“And much though I disagree with her on so many things, may I commend her courage in standing up for freedom of speech and putting forward her views clearly in a difficult and sensitive area, but one where she has a right to be heard.”

An SNP spokesman said in a statement: “Joanna Cherry was removed from the front bench because of unacceptable behaviour, which did not meet the standards expected of a front bench spokesperson – not because of the views she holds.”