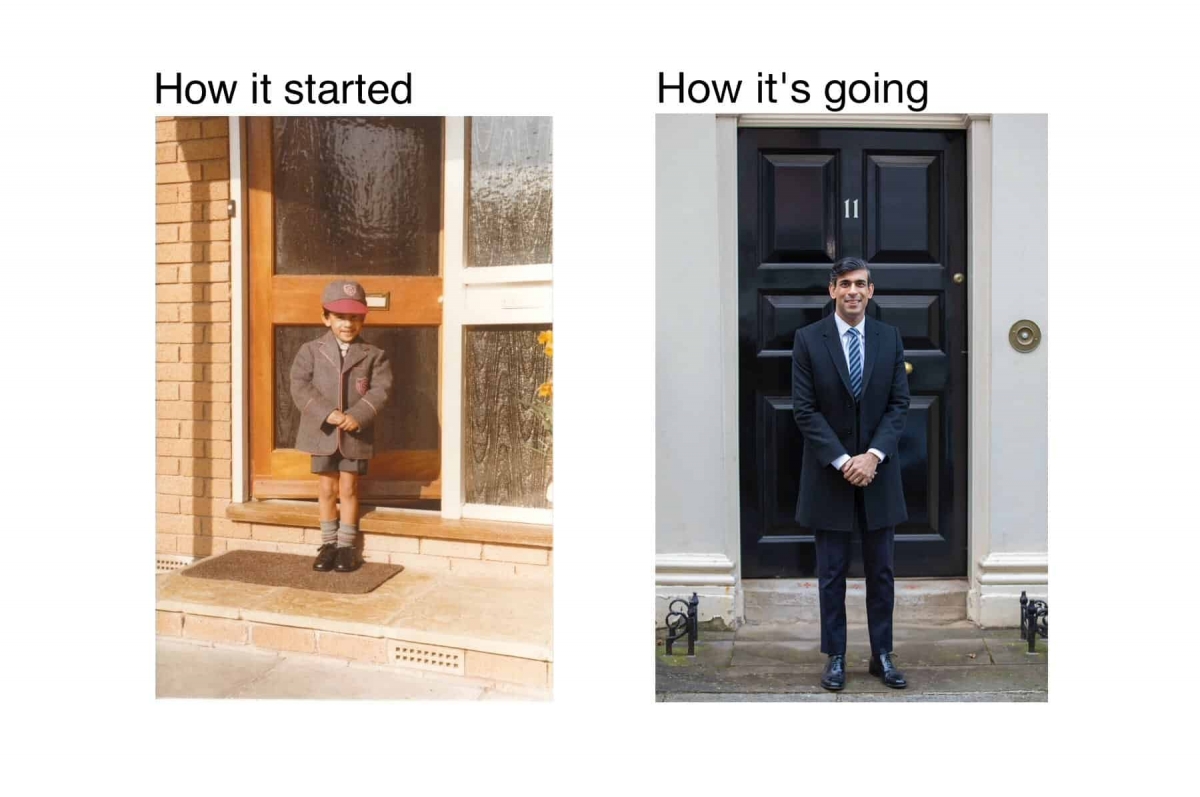 An emotional Rishi Sunak celebrated his one year anniversary as Chancellor of the Exchequer this weekend, posting a ‘how it started/ how it’s going’ tweet in a bid to pull on the heartstrings of his already smitten devotees.

The MP for Richmond was appointed into the position this time last year following the dramatic resignation of Sajid Javid, who walked after Boris Johnson demanded that he appointed special advisers to form a joint united for 10 and 11 Downing Street.

He arrived just 27 days before he had to deliver his first Budget and worked under terms which were described as a “power grab” by Dominic Cummings which made him “chancellor in name only”, or ‘Chino’.

Sunak’s first year has undoubtedly been a tough one as Covid-19 restrictions took their toll on an already beleaguered economy.

In August he launched an Eat Out to Help Out initiative designed to boost the economy following the effects of the national lockdown.

As a result, pubs and restaurants were able to offer discounted meals from Mondays-to-Wednesdays throughout August. Throughout the month, around 100 million meals were subsidised, at a cost of more than £500 million.

The move is thought to have underpinned a spike in infections which led to a second lockdown in November.

It suggests that between 8 per cent and 17 per cent of newly detected infection clusters could be linked to the economic measures.

This weekend Mr Sunak took to Twitter to celebrate his first year in Number 11.

But the humble ‘rags to riches’ story was quickly picked apart by people on social.

Here’s the best reactions so far:

Sorry, but I don’t think they’re going to make a ‘Billy Elliot’ type film out of your Winchester College, Oxford, Hedge Fund, marry billionaire daughter story mate. Get on with the job. https://t.co/372cfrKdck

And what a year! The highest covid death rate in the world & the worst economic slump in 300 years.
I'll buy you a light sabre if you want. https://t.co/mHqdDeu11P

A heartwarming story of a young boy born to affluent parents, sent to an elite private school, then Oxford, who got a job in investment banking, before becoming the wealthiest MP in Parliament and voting for policies that plunged millions of working class people into poverty… https://t.co/JJY0gBdZQM

-Earned a place at Oxford, where he got a first
-Got one of the most competitive scholarships worldwide to Stanford
-Had a career
-Became a Partner of a charity fund helping children worldwide.

inspiring to think that we live in a country where the head boy of winchester college can grow up to marry the daughter of a billionaire and oversee the worst response to Covid-19 of any major global economy while facilitating a six-figure death toll https://t.co/Rj0gCEZthz

"Growing up I never thought I would be in this job (mainly because I wanted to be a Jedi)…"
How it started. How it's going. pic.twitter.com/UlDlDPtvS5

Related: New Zealand back in lockdown as UK awaits “road-map” out