Reaction as Truss moves to ban solar panels on farms

"This has NOTHING to do with fossil fuel companies donating to the Tories", one person stressed. 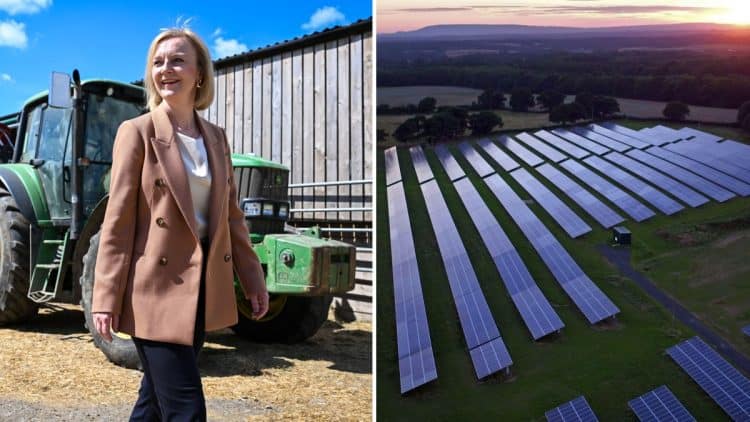 Liz Truss opposes the installation of solar panels on productive agricultural lands, Downing Street has said, amid reports that ministers are seeking to restrict the development of solar projects on farms in England.

He is considering redefining land categories to curb the development of solar power, effectively skewing the planning system against the renewable energy source, according to The Guardian.

Asked about the report, the Prime Minister’s official spokesperson told journalists: “I can point you back to what the Prime Minister said, I think at the start of September, when she said she doesn’t think we should be putting solar panels on productive agricultural lands, because obviously as well as the energy security issue, we face a food security issue. So we need to strike the right balance.”

Pressed on whether farmers or the Government should decide how to use farmland, the official said: “Of course it is right that farmers who own farms decide how best to use it, and I think she was clear about that during the campaign.”

When asked how the tightening of planning rules fits in with Ms Truss’s pro-growth agenda, her spokesman said: “I think it’s important to wait for the detail rather than get into speculation”.

The solar industry has criticised the Government’s reported move, saying it would put the Environment Secretary in the “anti-growth coalition” she railed against in her speech at her party’s conference last week.

“Solar power is the answer to so many needs and policy demands: it will cut energy bills, deliver energy security, boost growth and help rural economies.

“Ranil Jayawardena’s opposition to solar farms must surely make him part of the anti-growth coalition.”

The Prime Minister has previously expressed doubts about the “depressing” spread of solar power “paraphernalia” on agricultural land, a sentiment echoed by Energy Secretary Jacob Rees-Mogg.

At a fringe event at the Conservatives’ annual gathering, he dismissed the idea that sheep and cattle could graze in fields with the panels, claiming the grass under them would be as poor as that under the trampoline in his garden.

“Grass doesn’t grow underneath things because the sun doesn’t get through, because the sun’s going to the solar panel, so they (the panels) may be on stilts but what you get growing underneath is sort of weedy stuff that isn’t very nutritious.

He added: “There is always a tension between what you regulate and what you don’t regulate. And it is all about balance. I think we need to have some concern about food security, and therefore maintaining highly productive agricultural land is quite a sensible interest.”

The Government has faced a backlash after lifting England’s fracking ban, in place since 2019 following a series of earth tremors, and giving the green light to the expansion of oil and gas operations in the North Sea.

There has been a flood of reaction to the news.