The prime minister - now implicated in the inquiry - is effectively Sue Gray's boss! 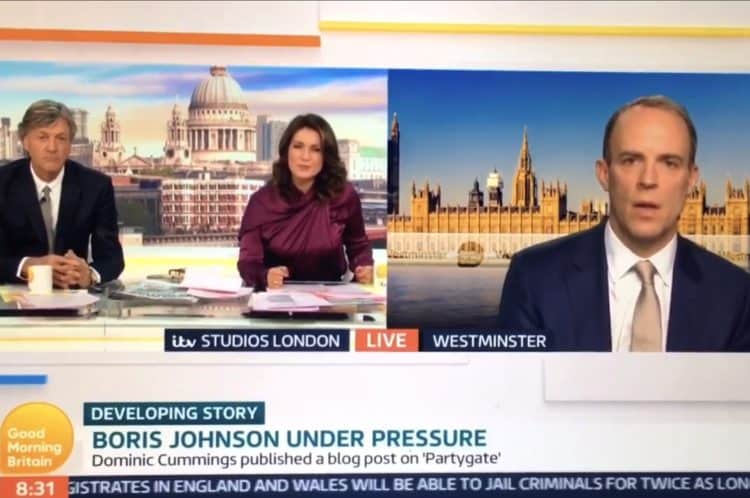 Dominic Raab’s claims that Sue Gray’s inquiry will be “independent” have been rubbished this morning.

The justice secretary told Good Morning Britain viewers that he accepts government breaches of their own lockdown rules “is a significant issue” as he was scrutinised by Susanna Reid on the breakfast show.

He added that “that is why there’s an independent investigation”, much to the bewilderment of Peter Stefanovic.

The filmmaker took to Twitter to expose the blatant lie, explaining that Gray is a serving parliament secretary and Boris Johnson, who is now at the centre of the investigation, is effectively her boss.

A report into what?

He said the report could be a classic “bait and switch trick” because it has been positioned as a “full-blown judiciary inquiry that will establish guilt and answer the question of whether Boris is fit to carry on as prime minister when in reality it could turn out to be nothing of the kind”.

From the outset, it is unclear what the terms of reference of the report are and what specific questions Gray has been asked to look into, which is an odd approach.

As our barrister notes, Gray has “never been the gatekeeper of the ministerial code”.

“You can’t be found guilty if they don’t ask the question.”

A simple sleight of hand

Concerns have also been raised over whether the government is marking its own homework on the matter.

As a government employee, Gray isn’t independent. Usually, an independent body would publish findings on investigations such as this, but a simple sleight of hand has allowed the government to make this look like something it isn’t.

We also don’t know whether those implicated will get advance sight of the report and will have a right to comment or even change it.

And the public may not get the full version of the report, which is cause for concern.

It is, as our barrister said, a “very unusual procedure to use for this investigation” by allowing the Cabinet Office to look into the prime minister.

So unusual, in fact, that it may just be the thing that lets him off the hook.

Related: Gary Neville told Keir Starmer he was ‘not being strong enough’