Parliament is not due to convene again until early September, but there is significant momentum behind ending the summer recess sooner. 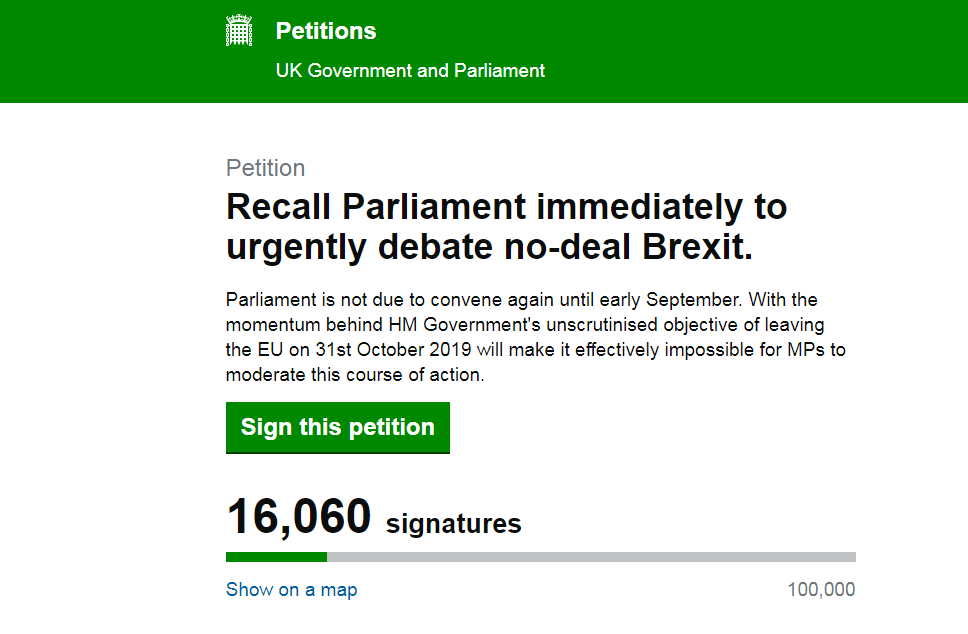 A petition has been launched to recall parliament immediately in order to debate no-deal Brexit.

Parliament is not due to convene again until early September, but there is significant momentum behind ending the summer recess sooner.

More than 100 MPs have signed a letter demanding that Boris Johnson do so as a good initiative.

And now in excess of 10,000 people have signed a survey making a similar request.

A petition created by a Marcus David Lynch has garnered over 16,000 signatures over the past 24 hours.

It reads: “With the momentum behind HM Government’s unscrutinised objective of leaving the EU on 31st October 2019 will make it effectively impossible for MPs to moderate this course of action.”

The government will be forced to respond to the petition because it has more than 10,000 signatures.

If more than 100,000 people sign, then petitions are considered for debate in parliament.

Labour leader Jeremy Corybn said today he will do everything in his power to stop a no-deal Brexit.

At a speech in Northamptonshire, Mr Corybn will say: “Labour believes the decision on how to resolve the Brexit crisis must go back to the people.

“And if there is a general election this autumn, Labour would commit to holding a public vote, to give voters the final say, with credible options for both sides, including the option to remain.”