The prime minister has been accused of being missing in action over the festive period as Covid cases soar. 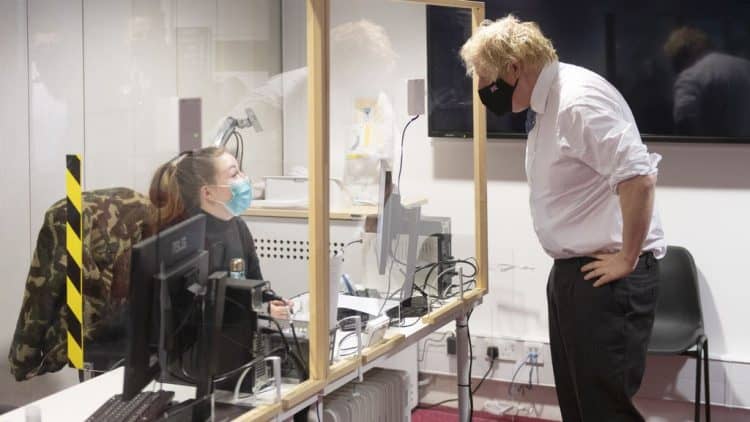 Boris Johnson insisted he has “been in this country” after he made his first public appearance in 10 days.

The prime minister has been accused of being missing in action over the festive period as Covid cases soar.

England is now the only country in the UK to allow nightclubs to stay open for New Year’s Eve celebrations, despite more than 100,000 Covid cases being registered.

Lib Dem health spokeswoman Daisy Cooper said: “It comes as no surprise this prime minister is in hiding when this country is calling out for strong leadership.

“Once again, whilst our NHS is left to hope for the best but prepare for the worst, the PM is nowhere to be seen.”

On a visit to a vaccine centre this morning the prime minister said the Omicron variant was causing “real problems” but that people could enjoy New Year celebrations cautiously.

Calling on more people to come forward to get jabbed, he said in some wards as many as 90 per cent of those in intensive care for Covid had been unvaccinated.

But asked where he had been over the festive season he appeared flustered, replying: “In this country… where do you think?”

Ahead of Christmas the PM said he did not expect to be taking a break because of the mounting workload.

But with cases hitting record levels and decisions over whether to restrict New Year gatherings, Mr Johnson’s deputies such as Sajid Javid have been fronting announcements.

On rising cases, the PM told reporters: “I cannot stress too much how vital it is for everybody to get that booster jab, particularly the 2.4 million people who’ve had two jabs but haven’t yet had their booster.

“They had two jabs more than six or seven months ago so they’re eligible for their booster, but they’ve not yet come forward to do it. I would say to people come forward and get your booster.”

He added: “I’m sorry to say this but the overwhelming majority of people who are currently ending up in intensive care in our hospitals are people who are not boosted.

“I’ve talked to doctors who are saying that the numbers are running up to 90 per cent of people in intensive care who are not boosted.

“If you’re not vaccinated you’re eight times more likely to get into hospital altogether. It’s a great thing to do, it’s very important, get booted for yourself and enjoy New Year sensibly and cautiously.”