Matt Hancock’s LBC show gets off to a rocky start

John in Edinburgh said he was "totally useless as a health secretary". 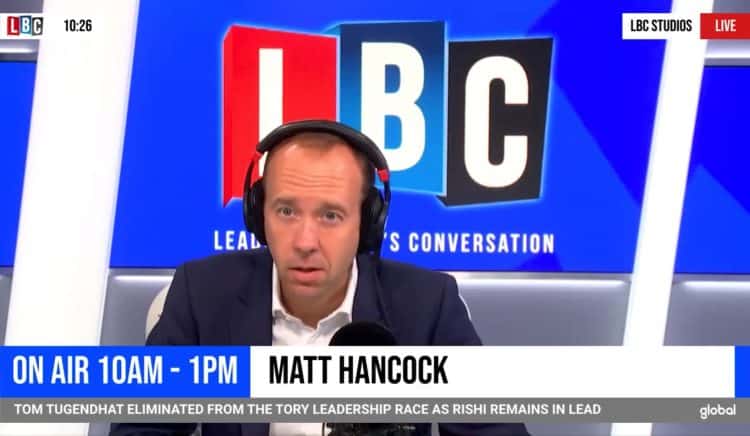 Matt Hancock’s stint on LBC got off to a rocky start after his record as health secretary came back to haunt him.

Hancock filled in for James O’Brien by presenting a programme today after Angela Rayner did so yesterday.

He said he is backing Rishi Sunak to be Tory leader because “he’s the one who’s got the economic plan to get through difficult times”.

“He’s not promising what can’t be delivered – he’s been really straightforward about the challenges that the country faces and how we’re going to deal with it, especially getting the inflation down which is obviously causing huge problems with the cost of living right how, and making sure that we get growth going”, Hancock said.

Later in the show he faced an awkward question from a caller on rare diseases.

John in Edinburgh described Hancock as “totally useless as health secretary”, saying he is backing Rishi Sunak in the Tory leadership race because he will “probably be able to correct some of the mistakes” Hancock has made in the past.

A friend of Matt Hancock’s said: “The guy was wrong, off topic and wouldn’t stop talking so Matt had no option but to signal to the team. It’s completely standard in broadcasting when someone’s hogging the airwaves.”