The PM said we need to work together to tackle huge energy costs, rising inflation and migration. 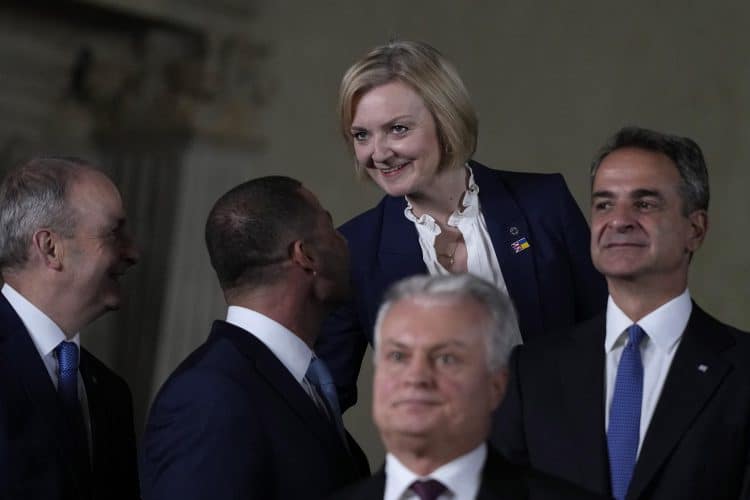 Liz Truss has insisted she is not moving her administration closer to Europe, even as she hailed Emmanuel Macron as a “friend” at a one-day summit in Prague.

The Prime Minister, who has faced a torrid few days at home that included backbench revolts and a fractious party conference, sought to present the UK as a crucial ally in Europe against authoritarianism and as a staunch backer of Ukraine at the Czech summit.

Alongside a key meeting with Emmanuel Macron, who spearheaded the gathering of 44 European leaders, Ms Truss also spoke with her counterparts from across the continent as she sought to present the UK as a key ally against Russia.

And while the Prime Minister was resolute that her attendance at the summit alongside both EU and non-EU states did not signal a fundamental shift in her perspective on the bloc, she had warm words for the “strong show of unity against tyranny” presented at the meeting.

She told broadcasters on Thursday evening: “What this is about is about working with all of our European partners to challenge (Vladimir) Putin’s appalling war in Ukraine, but also to work together on the issues that we all face, huge energy costs, rising inflation and also migration across our continent.

“So it is very important that we work with our neighbours and allies to face down Putin but also deal with the issues we face.”

But she was also clear: “This is not about moving closer to Europe.”

Nonetheless, the appearance of Ms Truss and her delegation at such a summit was one of the talking points of the event after years of frosty relations between the UK and the bloc.

“Are you happy to be in Europe, Prime Minister?” one reporter shouted at her as she walked into the gothic building hosting the summit on Thursday morning.

Her attendance, alongside renewed talks between London and Brussels over the vexed issue of the Northern Ireland Protocol, has prompted hopes of a thaw in those tensions.

“Thank you for being here”

“Thank you for being here,” Mr Macron said when he met Ms Truss for face-to-face talks on Thursday evening.

Ms Truss, in the full beam of the media, smiled back.

Earlier, she had called Mr Macron a “friend” – repudiating her own controversial refusal to say whether the French president was a “friend or foe” during the Tory leadership race.

“We’re both very clear the foe is Vladimir Putin, who has through his appalling war in Ukraine threatened freedom and democracy in Europe and pushed up energy prices which we’re now all having to deal with,” she told broadcasters.

During the day, there were also snatched conversations with Irish Taoiseach Micheal Martin, another key voice in efforts to resolve the protocol row, as well as a face-to-face meeting with Dutch prime minister Mark Rutte.

Earlier, her first meeting of the day had been with Czech prime minister Petr Fiala, who over an early lunch discussed opportunities for future collaboration on securing long-term energy supplies.

Ms Truss, still a newcomer to such gatherings, gave a brief address at the summit’s plenary session.

Behind closed doors, it is understood she pitched the UK as a key Ukrainian ally, referencing the example of Vaclav Havel, the first president of the Czech Republic following the collapse of communism, and stressing the need to stand up for freedom in democracies.

She also went into the summit with a set of key priorities, flagging energy and migration as particularly important.

In a statement released at the conclusion of the day’s proceedings, she said: “Leaders leave this summit with greater collective resolve to stand up to Russian aggression.

“What we have seen in Prague is a forceful show of solidarity with Ukraine, and for the principles of freedom and democracy.

“The UK will continue to work with our allies to deliver on the British people’s priorities, including ending our reliance on authoritarian regimes for energy and reducing costs for families, tackling people smuggling gangs, and standing up to tyrants.”

Ms Truss will finish the day at a dinner alongside her European counterparts, where is believed to be seated near Mr Fiala, Mr Rutte and European Council President Charles Michel.