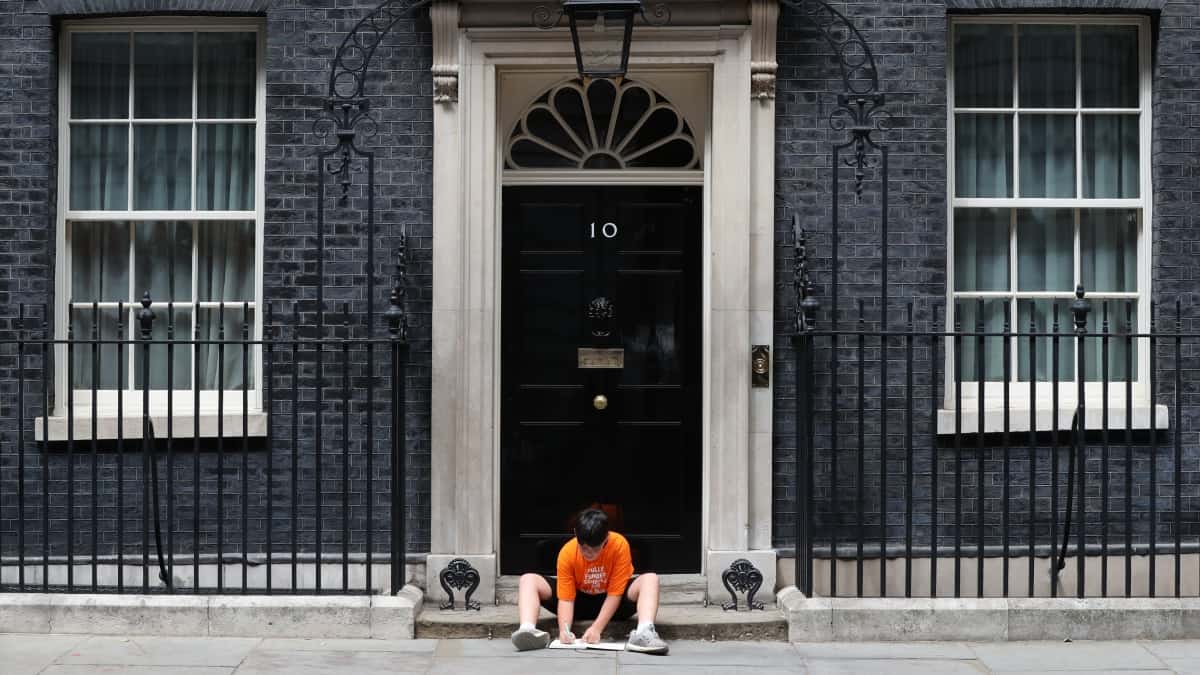 Labour MP Jess Phillips left her 10-year-old son on the steps of 10 Downing Street as part of a demonstration against funding cuts that have forced schools to close early.

Ms Phillips said the brief symbolic demonstration was taken because “schools just cannot cope anymore” and to reflect the government’s responsibility to care for and educate the natioan’s children on a Friday afternoon.

Her son Danny is at a school in Birmingham that is having to close early amid tight budgets.

After dropping him off to get on with some homework, she said: “Education cuts mean that lots of children like my son Danny will not be able to go to school five days a week.

The Birmingham Yardley MP had earlier led a short protest march from Parliament Square to the Downing Street gates where pupils, parents, teachers and Save Our Schools campaigners broke into a chant of “save our schools”, “five days a week” and “no ifs, no buts, no education cuts.”

Children, parents and teachers from Birmingham, Stockport, Leicester, Sussex, Hertfordshire and Wiltshire were among the protesters.

Ms Phillips’ son Danny said: “Why are we one of the richest countries in the world and yet we cannot afford to have children in school?”

Campaigners say more than 250 schools across the country are now either part-time or going part-time because of funding cuts – and they warn many more schools will have to follow suit.

Save Our Schools campaigners suggest that funding cuts are already damaging children’s education, with many schools cutting back on the number of teachers, support staff and teaching assistants.

It also means that working parents have to arrange additional childcare and school staff, they add.

Ms Phillips added: “I am not just a policymaker, I am also a parent. The reality is this is affecting people across the country. It is affecting members of the House of Commons.

“It must be bad if government policy and austerity has got so bad that it is acting detrimental towards some of the most privileged people in society.

“The single most important thing for most parents is that their children prosper.”

Alison Ali, of Brighton, came to the protest with her 10-year-old twin daughters Leone and Suzie – plus their friend Isla Norton, also 10, of Hastings.

Isla said she felt “cross and angry” about what was happening and that someone like the Prime Minister “could give more money to the schools so the children can get the right education”.

Ms Ali said: “I think this (protest) is going to say that parents are just not prepared to take it anymore. We are fed up with the hypocrisy.

“If you are going to fine parents for taking their child out of school for one day, then do not implement funding cuts that mean are children are going to be losing 20 days a year in education.”

Kay Tart of Hitchin in Herts – who is a district councillor and school governor, came to the protest with her children Harry, nine, Esme, seven, and Thea, five.

She said: “If we don’t fund our education system properly then the next generation of politicians, doctors, lawyers, engineers and scientists are going to suffer.

“It is our economy, our future and our children’s future that is at stake. Just act now – it is quite simple.”

A Department for Education spokesman said: “The funding for an average primary class of 28 in Birmingham is £125,000 – above the national average of £115,000 for an equivalent sized class.

“These amounts are to cover a full five-day week in term time.”