The Leave campaign backer was heard talking "feverishly" on the phone after the Brexit referendum result in 2016. 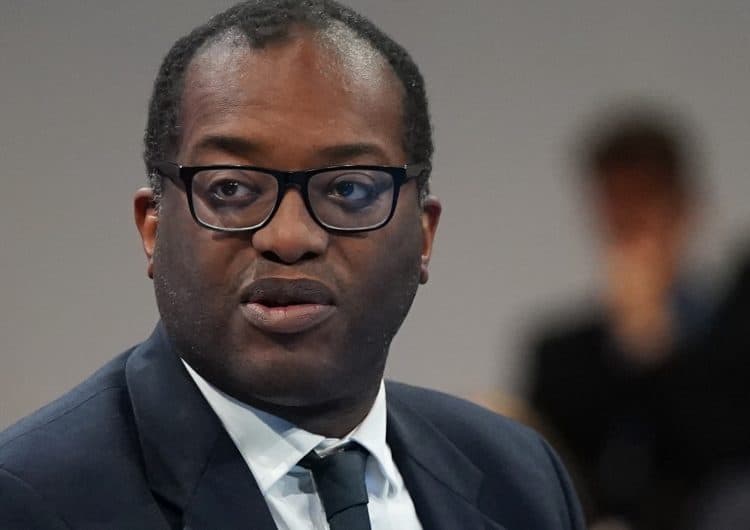 Chancellor Kwasi Kwarteng reportedly said “who cares if Sterling crashes” after the Brexit referendum result in 2016.

The then-Tory backbencher, who backed the Leave campaign, was heard making the remark outside the Groucho Club in Soho, according to the Evening Standard.

Joy Lo Dico, the journalist behind The Londoner diary column at the time, said she found Mr Kwarteng talking “feverishly” into his phone after the result. “The markets are going mad,” he told her.

The Brexiteer was later heard saying: “Who cares if Sterling crashes? It will come back up again.”

Kwarteng has today said he is “confident” his tax-cutting strategy to drive economic growth will work despite the turmoil on the financial markets.

In talks with City investors in the wake of Friday’s mini-budget, Mr Kwarteng insisted he was committed to “fiscal discipline” and that he had a “credible plan” to start to bring down the UK debt.

He also emphasised the importance of the “supply side” reforms ministers will be setting out in the coming weeks, including his “Big Bang 2.0” reforms of the financial market regulations, in supporting growth.

“We are confident in our long-term strategy to drive economic growth through tax cuts and supply side reform. Supply side reforms are critical – increasing capacity brings down prices,” he said, according to a Treasury readout of the meeting.

“Cabinet ministers will set out more supply side measures over the coming weeks to make meaningful change. Right across government, departments have to be focused on this.

“As I said on Friday, every department will be a growth department.

“We are committed to fiscal discipline, and won’t re-open the spending review. We have a medium-term fiscal plan coming on November 23, alongside an OBR (Office for Budget Responsibility) forecast. That will be a credible plan to get debt to GDP falling.

“We have responded in the immediate term with an expansionary fiscal stance on energy because we had to. With two exogenous shocks – Covid-19 and Ukraine – we had to intervene. Our 70-year-high tax burden was also unsustainable.

“I’m confident that with our growth plan and the upcoming medium term fiscal plan – with close cooperation with the Bank – our approach will work.”

His comments came after the pound plunged to a record low on Monday in the wake of his Commons statement last week setting out his plan for £45 billion of tax cuts.

In an attempt to calm the markets, Bank of England Governor Andrew Bailey issued a statement insisting they would raise interest rates by “as much as as is needed” to shore up the pound and keep the lid on inflation.

It followed Mr Kwarteng’s own statement on Monday that he would set out a new medium-term fiscal plan on November 23 with an updated set of OBR forecasts – something that was missing from Friday’s announcement.

After two days of big changes, the pound settled down on Tuesday, trading at around 1.08 dollars for most of the day, deviating only briefly with a two cent drop.

London’s top stock index, the FTSE 100, was also subdued, trading up by less than 0.1 per cent on Tuesday afternoon.

Gilt yields fell by around 3 per cent, but are still more than a quarter higher than just a week ago.