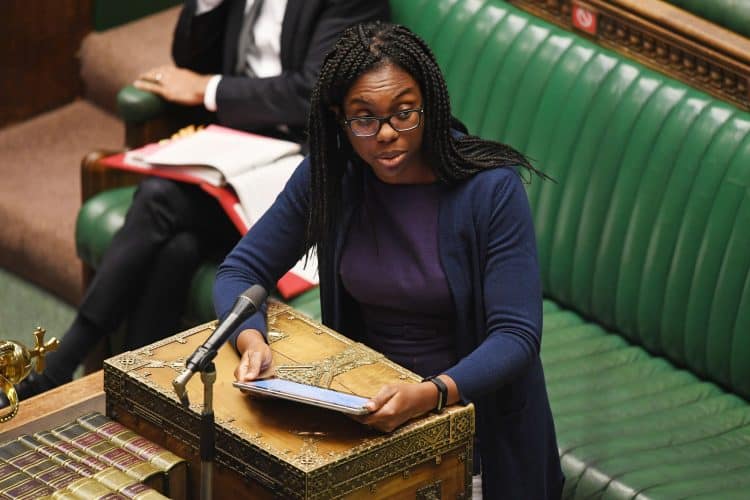 Kemi Badenoch – who, this week, was appointed Minister of State for Levelling Up alongside her equalities brief – made the comments in her parliamentary office in 2018, a year before she was first appointed a minister by Boris Johnson.

In the recording, obtained by VICE World News, Badenoch – considered a rising star in the Tory party – said: “It’s no longer about minority rights in terms of race any more or nationality.

“It’s now, you know like, it’s not even about sexuality now, it’s now like the whole transgender movement, where, OK well we’ve got gay marriage, and civil partnerships, so what are transsexuals looking for?”

She continues: “Even when, you know, so, people hear about, you know like the whole bathroom thing. It’s actually more of an American thing but they have a similar problem, that, right so now it’s not just about being free to marry who you want, you now want to have men using women’s bathrooms.”

Labour said the comments were “disgusting” – and questioned whether Badenoch should remain in her post.

Misgendering trans women could be in breach of UK equality laws, after an employment tribunal ruling in 2019 concluded that “calling a trans woman a man is likely to be profoundly distressing. It may be unlawful harassment.”

A UK government spokesperson said: “The Minister for Equalities is working hard to deliver for LGBT people, whether that is modernising the process of applying for a gender recognition certificate, driving forward LGBT rights in the workplace or banning conversion therapy.

“This 2018 comment has been taken out of context, with the Minister making a clear point about striking the balance for equality and fairness when there are multiple and often competing demands between different groups. It should not be used to misrepresent her views.”

Badenoch has been equalities minister since February 2020. She has responsibility for policy on sexual orientation and trans equality – and “addressing the discrimination and inequalities that LGBT people face”.

Earlier this year, she was put  under pressure to resign after three of the government’s LGBT advisers quit their posts and issued damning criticism.

Jayne Ozanne resigned from the LGBT advisory panel in March and accused Women and Equalities Minister Liz Truss and Badenoch of vilifying the trans community.

She was followed by James Morton who had reportedly been “very concerned for several months” that Truss and her junior ministers were “not committed to LGBT equality”.

Ellen Murray became the third person to quit the panel – writing on Twitter that she decided to leave “due to the government’s persistent and worsening hostility towards our community in myriad areas”.

Human rights campaigner Peter Tatchell said at the time that Badenoch had “lost the confidence” of the LGBT+ community, failing to deliver a government promise to ban conversion therapy.

Angela Rayner, deputy leader of the Labour Party, told VICE: “Everyone should be able to be themselves and be celebrated, supported and loved for who they are. The Equalities Minister should not be in her post if she does not believe that.

“With hate crimes and transphobia on the rise we need an Equalities Minister who will stand up for trans people, not add fuel to the fire of abuse and discrimination faced by LGBT+ people in our country.”

John Nicholson, the Scottish National Party’s shadow culture secretary and deputy chair of the All-Party Parliamentary Group on Global LGBT+ Rights, said Badenoch has “no credibility and a number of personal issues to work through on prejudice.”

He said: “This is someone who clearly harbours extreme hostility to trans people. How can the UK Government Minister for Equalities pretend to be an honest broker when it comes to LGBT+ rights when she has expressed such views?”