The chair of the British Medical Association said the government's plan was "ignoring the virus all together". 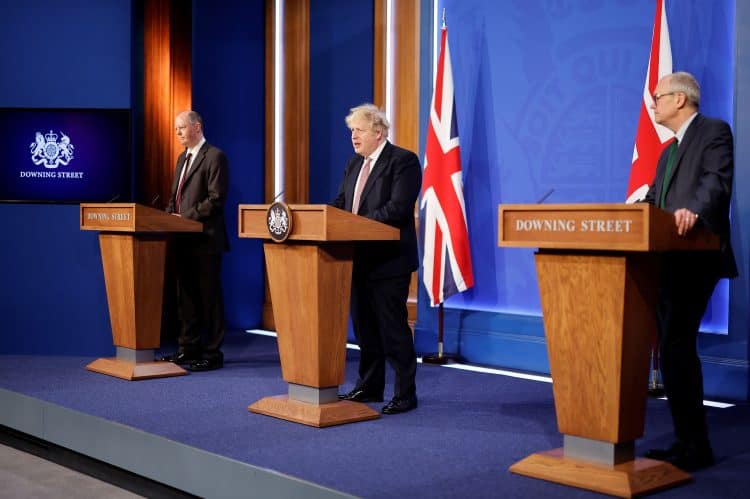 The axing of self-isolation laws and the end of free universal testing in England will cause uncertainty, anxiety and hardship, according to unions and charities.

Boris Johnson set out the government’s strategy for “living with Covid” on Monday as he hailed the development of vaccines and treatments for coronavirus as “possibly the greatest national effort in our peacetime history”.

But the Prime Minister said “we should be clear that the pandemic is not over”, warning “there may be significant resurgences”.

Professor Sir Chris Whitty, England’s chief medical officer, said the Omicron wave is “still high”, adding that new variants are anticipated, with some expected to “just disappear”, while others will cause “significant problems”.

‘The sun is shining’

Johnson acknowledged there will likely be another variant that will “cause us trouble”, saying he did not want people to think “there’s some division between the gung ho politicians and the cautious, anxious scientists”.

He said: “The most important thing is that – and I hope this is the big take out from this… the sun is shining but we’re keeping our umbrella.”

But the British Medical Association (BMA) warned that the “living with Covid” strategy “fails to protect those at highest risk of harm from Covid-19, and neglects some of the most vulnerable people in society”.

Dr Chaand Nagpaul, BMA council chair, said: “Living with Covid-19 must not mean ignoring the virus all together – which in many respects the government’s plan in England seems to do.

“On the one hand the government says it will keep monitoring the spread of the virus, and asks individuals to take greater responsibility for their own decisions, but by removing free testing for the vast majority of the population on the other, ministers are taking away the central tool to allow both of these to happen.

“Far from giving people more freedom, today’s announcement is likely to cause more uncertainty and anxiety.”

Groups representing vulnerable individuals also sounded the alarm over the end to isolation laws, with the Scope disability equality charity charity saying it would usher in a life “living with fear”.

Blood Cancer UK warned that the plan “will cause huge anxiety among immunocompromised people and leave many of them feeling abandoned”, while the MS Society said the scrapping of free universal testing is “not only reckless but dangerous”.

Meanwhile, unions condemned the decision to end the entitlement to statutory sick pay from day one for people with Covid-19.

On March 24, changes to statutory sick pay and employment support allowance designed to help people through the pandemic will come to an end.

TUC general secretary Frances O’Grady warned that the decision will lead to people taking the infection into the workplace because they cannot afford to take time off.

“The government is creating needless hardship and taking a sledgehammer to public health,” she said.

“The failure to provide decent sick pay to all, from the first day of illness, is reckless and self-defeating.

“If people can’t afford to stay home when they’re sick, they will take their infections into work.

“Ministers’ inability to grasp this fact will leave the UK vulnerable to future variants and pandemics.”

All coronavirus laws in England, including the legal requirement for people who test positive to isolate, are set to end on Thursday, before free universal testing is scrapped in April.

Those who receive a positive Covid test will still be advised to stay at home for at least five days, but will not be obliged to under law under the plans subject to parliamentary approval.

Sir Chris urged people who test positive for the virus to self-isolate, despite the change in rules.

Under the plans announced on Monday, routine contact tracing will also cease on Thursday, as will the £500 self-isolation payments and the legal obligation for individuals to tell their employers about their requirement to isolate.

Free universal testing will then be massively scaled back from April 1.

Remaining symptomatic testing will be focused on the most vulnerable, with the UK Health Security Agency (UKHSA) set to determine the details.

Elsewhere, Nicola Sturgeon will set out her new strategic framework for dealing with coronavirus on Tuesday.

The First Minister will speak in the Scottish Parliament as the Scottish government’s blueprint for managing and recovering from Covid-19 is published.