The prime minister said the UK’s “internal market” has to be respected and “we just need to make it work”. 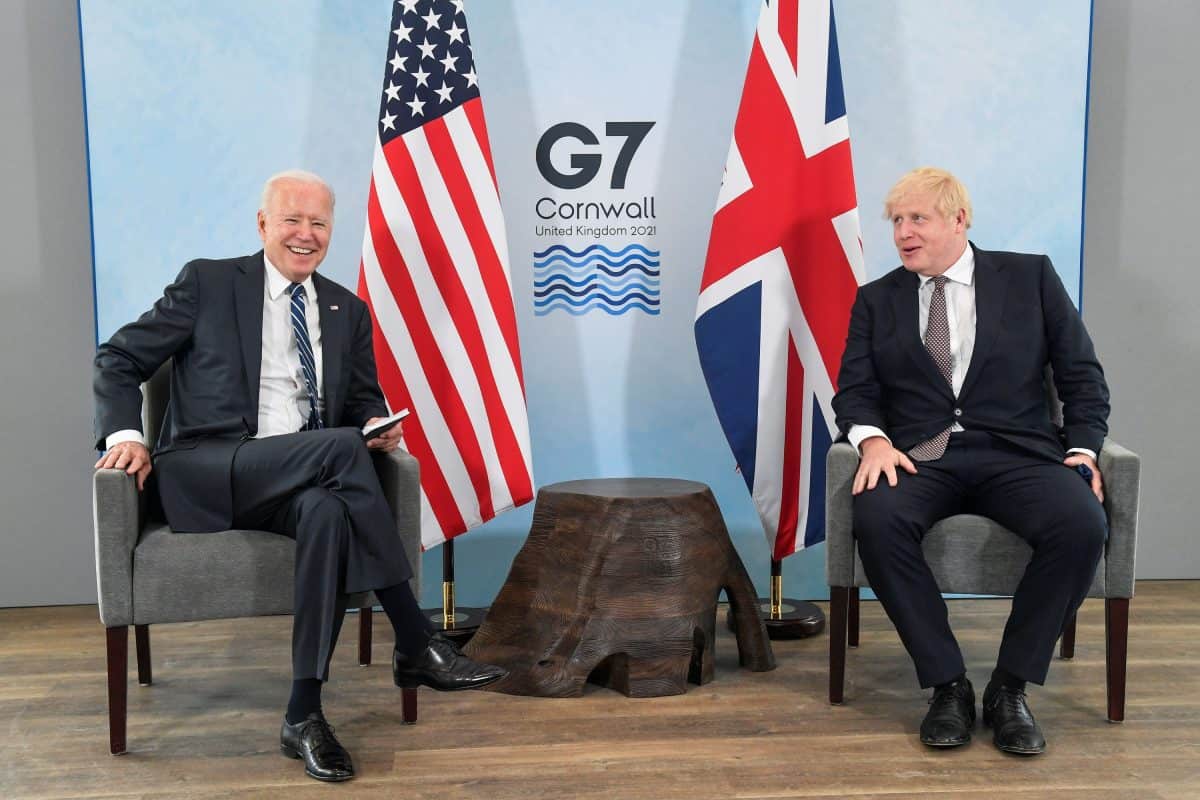 Boris Johnson has accused the European Union of taking an “excessively burdensome” approach to post-Brexit trading arrangements for Northern Ireland.

The prime minister, who signed the Brexit divorce deal which included the Northern Ireland Protocol, insisted he is not trying to back out of the agreement.

But he said the UK’s “internal market” has to be respected and “we just need to make it work”.

The prospect of a “sausage war” trade dispute came after Brexit minister Lord Frost refused to rule out the possibility that the UK could unilaterally delay imposing checks on British-made chilled meats which are due to come into force at the end of the month.

The Protocol effectively keeps Northern Ireland in the European single market in order to avoid a hard border with Ireland, meaning a trade barrier in the Irish Sea for goods crossing from Great Britain.

Johnson, who will hold talks with EU leaders over the course of the G7 summit, told the BBC: “You will understand that there are ways of enforcing the Protocol, ways of making it work, that may be excessively burdensome.

“I just give you one statistic: 20 per cent of the checks conducted across the whole of the perimeter of the EU are now done in Northern Ireland, three times as many as happen in Rotterdam.”

The new post-Brexit arrangements came into effect on January 1 and the dispute is still simmering, but Johnson insisted “I think we can sort it out”.

US President Joe Biden, who has Irish ancestry, is taking a close interest in the dispute and has warned against anything that could destabilise the arrangements put in place by the Good Friday Agreement.

The Brexit dispute has inflamed tensions for unionists in Northern Ireland, who dislike barriers with Great Britain.

The White House has indicated Mr Biden has deep concerns about the situation – and Johnson’s Government’s approach to it – but the prime minister has played down the prospect of a rift.

“The president didn’t say anything of the kind,” he told the BBC following their talks on Thursday.

“But what I think you can certainly say… is that everybody – and that includes me, includes our friends in Brussels, it includes Washington – everybody has a massive interest in making sure that we keep the essential symmetry of the Good Friday Agreement, we keep the balance.”

Foreign Secretary Dominic Raab said Mr Johnson was eager to raise the Protocol with the US president so he could be “very clear on our position”, but he added the pair “didn’t linger on” the issue.

Raab told Sky News the Prime Minister was able to explain that “we want a flexible, pragmatic approach”.

The Foreign Secretary added: “But for that to happen the EU must be less purist, more pragmatic and more flexible in the implementation of it. The ball is very much in the EU’s court in relation to that.

“The bottom line for us is that the threat, the risk, to the Good Friday Agreement comes from the approach the EU has taken – a particularly purist approach.”

At a press conference ahead of the G7 summit, European Commission president Ursula von der Leyen insisted the Protocol is the “only solution” to prevent a hard border with the Republic and must be implemented in full.

“We have shown flexibility, we will show flexibility, but the Protocol and the (Brexit) Withdrawal Agreement have to be implemented completely,” she said.

Von der Leyen and Macron flew into Cornwall on Friday morning and will have talks with Johnson over the course of the summit.

Following his talks with Biden, the prime minister claimed the UK has an “indestructible” link with the US, and he insisted he does not mind the term “special relationship” despite reports he feels it makes the UK seem “needy”.

“I don’t mind the phrase ‘special relationship’ because it is special. But you know, it encompasses a reality which is that the UK and the US have a real congruence of views on some stuff that really matters to the world.

Johnson suggested “you can call it the ‘deep and meaningful relationship’, whatever you want… the ‘indestructible relationship’”.

He added: “It’s a relationship that has endured for a very long time, and has been an important part of peace and prosperity both in Europe and around the world.”