Nicola Sturgeon invited Boris Johnson to meet her at Bute House - but he declined. 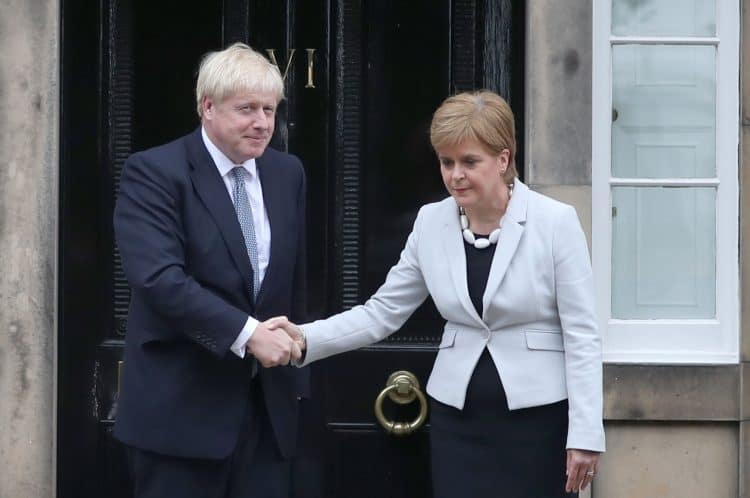 Boris Johnson is travelling to Scotland today – but has declined an invitation to hold talks with Nicola Sturgeon.

The Scottish First Minister had invited Johnson to meet at her official Edinburgh residence, Bute House, to discuss the UK’s recovery from the coronavirus pandemic.

But the prime minister will not find time to meet Sturgeon during his two-day visit.

In letter to Sturgeon, the prime minister said: “As I noted when we last met, I am keen to arrange an in-person meeting with you and the other first ministers and deputy first minister to build on the constructive discussions we had earlier this summer.

“We agreed then that we should establish a structured forum for ongoing engagement between the government and the devolved administrations to deliver tangible outcomes in the interest of people throughout the UK.”

Johnson said he was “particularly keen that we work closely together on the vaccination booster campaign this autumn”.

He added: “I look forward to meeting with you soon and working together in the interests of people in all parts of our country.”

Sturgeon acknowledged in her invitation letter on Monday she and Johnson “differ politically”, but stressed the Scottish and UK governments must “work together where we can”.

The prime minister’s visit to Scotland is likely to see further questions about his resistance to a second referendum on independence.

Cabinet Office Minister Michael Gove used a Sunday Mail interview to say the UK government would not stand in the way of a plebiscite if it was the “settled will” of the Scottish people.

Labour leader Sir Keir Starmer is also in Scotland, where he is focusing on the fight against climate change in the run-up to the United Nations Cop26 climate summit which will see world leaders gather in Glasgow in November.

Sir Keir wrote in the Guardian that the prime minister was “missing in action” on the climate agenda.

“The world is looking to Britain, as host of the summit, to deliver,” Sir Keir said. “We cannot afford to miss this moment, but I fear we will.”