The 'Jalsa Salana' will highlight the true peaceful teachings of Islam. 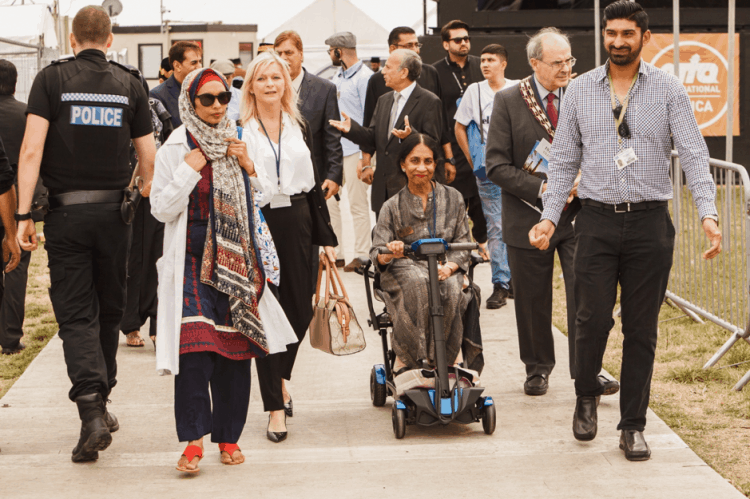 Hundreds of London’s Muslims will gather at ten mosques and centres, including the capital’s biggest and oldest, for the first time since the start of the pandemic for the UK’s longest-running Islamic convention.

Ahmadi Muslims will convene at the Mosques to join virtually with thousands more from across the UK who will descend on the 200-acre Oakland Farm in Hampshire for three days of live events and communal worship at the event known as the ‘Jalsa Salana’.

Prior to the pandemic, more than 35,000 people from all over the world attended the last Jalsa, held in 2019. This year, only UK residents who have been double vaccinated were permitted to enter the ballot to attend the Jalsa.

Those unable to attend in person will gather to watch the proceedings together at 40 Ahmadi Muslim mosques up and down the UK including at ten sites in London – such as London’s first purpose-built mosque, the Fazl Mosque in Wandsworth, and the UK’s largest Mosque, Baitul-Futuh in Merton.

The Mosques and centres across the UK will be putting up screens to join the event and will serve the same food being served in Hampshire.

Roughly 400 are expected to gather at the Baitul Futuh Mosque on the three days of the event amid strict social distancing measures.

In addition to the requirement to be double vaccinated, attendees must provide evidence of a registered, negative, COVID-19 test result in order to gain entry. Face masks will be mandatory in all enclosed spaces.

The highlight of the Jalsa will be the appearance of the global Islamic Caliph of the Ahmadiyya Muslim Community, His Holiness Hazrat Mirza Masroor Ahmad, who will deliver an address to attendees on each of the three days of the Jalsa.

The objective of the event is to highlight the true peaceful teachings of Islam and to enable the participants to increase their knowledge and understanding of Islamic teachings and practices.

Imran Khalid, an Imam based at the Baitul Futuh Mosque said: “This is the first time since the pandemic started that our members have been able to meet and worship together with our Caliph.

“Despite many Ahmadi Muslims not being able to travel to the Jalsa site itself, London’s Ahmadi Muslims will hold mini satellite events to come together and join in the experience.

“We’ll be preparing the same curries that are being served 50 miles down the road at the Jalsa, and wear our best clothes to join in this joyous occasion at our mosques.”

The event will also be broadcast online and on the Community’s worldwide television station, Muslim Television Ahmadiyya (Sky 731), across its 19 television channels.