But the former foreign secretary said "It would take a lot to persuade me to put my hat into the ring". 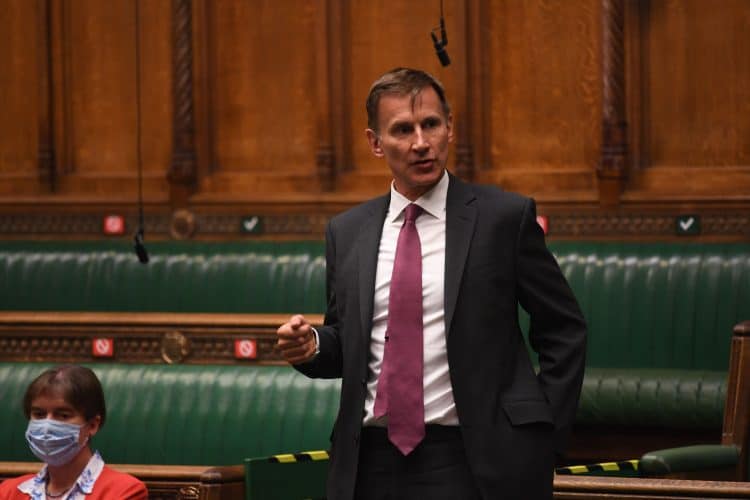 Senior Conservative Jeremy Hunt has said his ambition to lead the Tories has not “completely vanished” as Boris Johnson faces the threat of a challenge.

But Mr Hunt, who has served as both foreign and health secretary, insisted in an interview “it would take a lot to persuade me to put my hat into the ring”.

The comments were interpreted as a sign that a challenge to the Prime Minister could be coming as he battles to maintain authority over allegations of rule-breaking parties in No 10.

Six Tory MPs have so far publicly called for Mr Johnson to resign over the affair, while many more are believed to have sent in letters in an attempt to prompt a no confidence vote.

Hunt vs. Sunak vs. Truss

The House magazine said Mr Hunt denied actively considering a run, before adding: “I won’t say my ambition has completely vanished, but it would take a lot to persuade me to put my hat into the ring.”

Chancellor Rishi Sunak and Foreign Secretary Liz Truss are seen as the two frontrunners for any challenge to the Prime Minister.

But Mr Hunt was the strongest opponent against Mr Johnson when he won the leadership in 2019, coming second before being comfortably beaten.

Dominic Cummings, Mr Johnson’s former chief adviser who has accused the Prime Minister of lying to Parliament over parties, said Mr Hunt’s remarks were a sign of a challenge.

“The is SW1 code for: leadership contest is imminent, sign up early if you want a seat in Cabinet, am on phone to donors & getting office set up, there has to be one non-brexit nutter in last 2,” Mr Cummings tweeted.

It comes as Sunak refused to give his unequivocal backing to Mr Johnson as the threat to the Prime Minister’s leadership grows over partygate allegations.

The potential successor as Tory leader abruptly ended an interview on Tuesday when pressed if he gives his full support to the Prime Minister.

He instead said he believes Mr Johnson is telling the truth and backs his request for “patience” during a Whitehall investigation by senior official Sue Gray.

The affair deepened when Mr Cummings claimed Mr Johnson lied to Parliament over the parties.

Downing Street denies this, but appeared to accept that he would have to resign if he “knowingly” misled the House of Commons.

In his first interview since Mr Johnson’s apology to MPs over the scandal, the Chancellor said he accepts his explanation that he was not warned in advance about a No 10 drinks party during lockdown in May 2020.

“Of course I do. The Prime Minister set out his understanding of this matter last week in Parliament. I refer you to his words,” he told broadcasters.

“Sue Gray is conducting an inquiry into this matter and I fully support the Prime Minister’s requests for patience while that concludes.”

Asked if the Prime Minister should resign if he lied to Parliament, Mr Sunak said: “I am not going to get into hypotheticals, the ministerial code is clear on these matters.”

Pressed on whether Mr Johnson had his unequivocal support, Mr Sunak swiftly broke off the interview, walking off with a microphone still attached.

The Chancellor’s hours of silence after the Prime Minister’s apology to the Commons last Wednesday over the May 20 2020 “bring your own booze” garden gathering in No 10 had already been seen as conspicuous.

Related: Raab claims that Gray report is ‘independent’ get rubbished