...even though staff members on the parliamentary estate are still required to wear them. 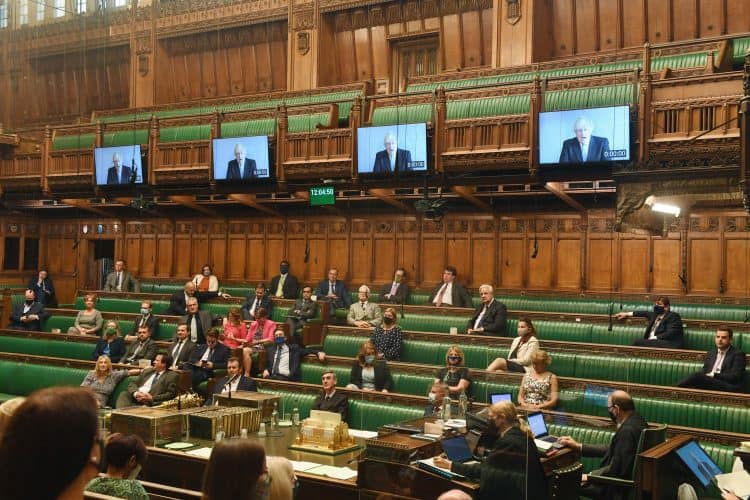 Jacob Rees-Mogg has insisted it is “reasonable” for him and Conservative colleagues not to wear face masks in the House of Commons chamber.

Labour claimed it was “one rule for them and another for the rest of us” after several Tory MPs, including some sitting close together, opted against wearing a mask at Prime Minister’s Questions.

But Commons Leader Rees-Mogg, among those to stop wearing a mask since restrictions in England were eased, defended their actions.

He said: “I have one in my pocket along with a handkerchief, it’s here in case the chamber is full.

“But it’s not and there’s a good deal of space, an amazing amount of space from some people who may have gone on recess early on the other side of the House, but even my hard-working, enthusiastic fellow Conservatives are not squeezed in and nor were we at PMQs yesterday.

“A normal PMQs we are all sitting squeezed in with hardly an inch between us, but yesterday there was space and therefore it was a reasonable decision for individual MPs to take for themselves, in accordance with Mr Speaker’s guidance.”

Shadow Commons leader Thangam Debbonaire had said: “Clearly some people on the government side don’t seem to know that the government’s own encouraging rules are that we should wear masks and socially distance in enclosed spaces.

“It’s clearly one rule for them and another for the rest of us.”

Labour’s Chi Onwurah (Newcastle upon Tyne Central) earlier raised questions about the fact there was “no requirement” on MPs to wear a mask in Parliament.

“Can I ask the member if he will give further consideration to what requirements can be placed on members of this House to better protect those who do so much to protect us?”

‘Don’t push the limits for the sake of it’

Conservative Sir Charles Walker, representing the House of Commons Commission, replied: “We’re all gregarious, not just MPs but also House staff, and I hope when they’re not looking after us they’re out enjoying the restaurants and clubs and bars of London that are reopening.

“Of course, our protective embrace cannot cover them there, however face coverings remain as one of the many mitigations available to the House in managing the risk of Covid.

“The commission continues to support their use in line with national guidance, but the Speaker has no power to prevent democratically-elected members from coming onto the estate or into the chamber when the House is sitting.

“As such, there is no meaningful way to enforce a requirement on members to wear a face covering in the chamber, but they are strongly encouraged to do so.”

On Monday, Commons Speaker Sir Lindsay Hoyle pleaded with MPs to continue wearing face coverings and “not push the limits for the sake of it”.

Unions representing staff based in Parliament have asked the Speaker to reconsider guidance for post-July 19, in which politicians are encouraged to wear a mask but are not be mandated to have one on.

It is compulsory, however, for staff on the estate to continue to have to wear a covering.