Hundreds of Just Stop Oil protesters staged a sit down protest on Waterloo Bridge in a "civil resistance" to "government inaction". 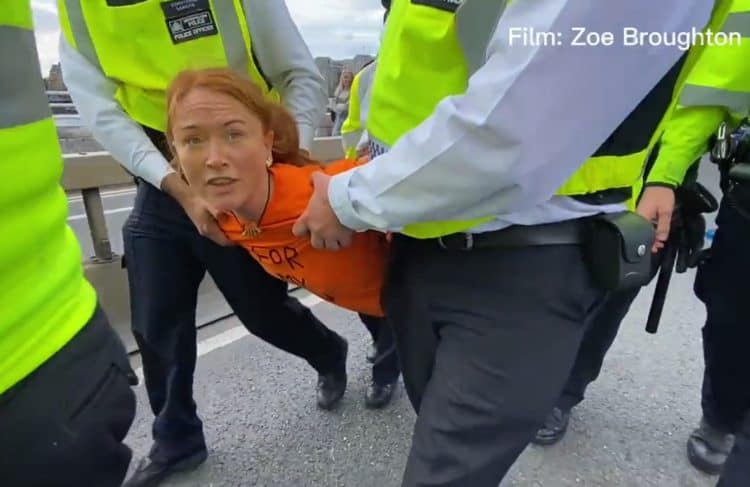 A climate protester managed to give a valiant interview as she was dragged away by the police on Sunday.

Video journalist Zoe Broughton was on the scene as Metropolitan Police officers began arresting protesters on the bridge.

She captured the moment one protester was led away by police before being forcibly removed from the bridge.

Speaking to cameras as she was carried away, the protester said: “I’m doing this for my son.

“The government’s inaction on climate change is a death sentence to us all.”

Noting that “the United Nations has said we should have no new oil,” the activist lamented that new Tory prime minister Liz Truss “wants to open 130 new oil licenses.”

“That’s a death sentence to this planet,” she said.

The Just Stop Oil (JSO) group said that 250 of its supporters held marches through central London on Sunday where they disrupted traffic in shopping districts and tourist hubs before carrying out a sit-down protest on Waterloo Bridge.

A JSO spokesman said: “We will continue in civil resistance until this government takes immediate steps to meet our demand to end the cost-of-living and climate crisis by stopping new oil and gas.

“We need to start a rapid transformation to a fairer society, decided by ordinary people and paid for by those who are profiting from humanity’s destruction.”