Human rights organisation Liberty said easing the restrictions on Stop and Search would “compound discrimination” in the UK. 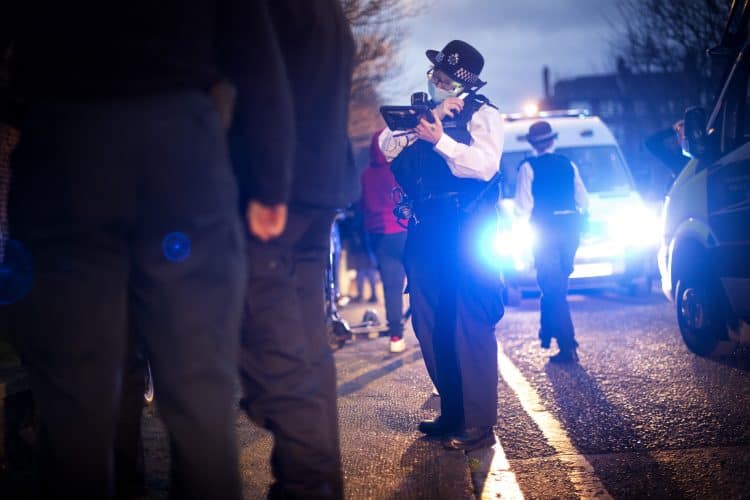 The policing minister has defended plans to ease restrictions on Stop and Search powers for police because of the “big impact” it could have on knife crime.

Boris Johnson’s new Beating Crime Plan, launched on Tuesday, includes a permanent relaxing of conditions on the use of Section 60 Stop and Search powers, under which officers can search someone without reasonable grounds in an area where serious violence is expected.

Campaign groups have criticised the plans for not doing enough to tackle the root causes of crime, while Labour has described one proposal as a “gimmick”.

But policing minister Kit Malthouse hit back at criticism, and asked: “What else can we do?” when questioned whether Stop and Search is discriminatory.

He told Sky News: “I am afraid I just don’t agree with that, and when people charge me on Stop and Search, I often say: ‘OK, if we can’t do Stop and Search, what else can we do?’ But it has to be something we can do tonight.

“We know that those people with knives in their pockets going out to injure and kill are out there tonight, and if I were a parent of one of these young men, and it is often young men, sadly, I would want to know that the killers might have been stopped and searched on the way to perpetrating that awful act.”

Human rights organisation Liberty had said easing the restrictions on Stop and Search would “compound discrimination” in the UK.

Malthouse added: “To those people who are critics of the tactics, I would say: look at the numbers, particularly somewhere like London, and tell us what the tactic should be instead. There’s long-term work, I agree, it is not the long-term solution. But in the short term it can have a big impact on suppressing knife crime.”

The Beating Crime Plan, trailed in the media over the weekend, has been launched on the prime minister’s first day after leaving self-isolation following a positive coronavirus contact.

The plans will permanently reverse limits imposed on police Stop and Search by Johnson’s predecessor Theresa May during her time as home secretary.

Section 60 powers give officers the right to search people in a defined area during a specific time period when they expect serious violence, and officers can look for weapons before they can be used, or those used in a recent attack.

The permanent change follows a nationwide pilot which reduced the level of authorisation needed to impose a Section 60 order, and lowered the degree of certainty required.

Labour leader Sir Keir Starmer has dismissed as a “ridiculous gimmick” a pledge by the prime minister to provide victims of crime with a named officer to call about their case.

The strategy will also include plans for league tables for forces’ 101 and 999 call-answering times, a national online platform to allow the public to contact police, and efforts against county lines drug gangs to be intensified.

The plans also include a £17 million package to persuade young people who go to an emergency department with a stab wound or have contact with police to stay away from violence.

But Iryna Pona, policy manager at the Children’s Society charity, said intervention should take place long before young people end up in hospital.

She added: “Prevention is better than cure. We need to be helping young people well before they end up being rushed into A&E fighting for their lives.

“We want to see a long-term plan for investment in early help for children at the first signs that they are vulnerable to being groomed.”

Johnson’s reforms for England and Wales will also see the extension of a pilot announced earlier this year which involves burglars and thieves being made to wear GPS tags on release from prison.

The strategy will also trial the use of alcohol tags – which detect alcohol in the sweat of the wearer – on prison leavers in Wales in a bid to reduce alcohol-related crime.

But on the day that further details of the prime minister’s crime-blitz strategy are revealed, chairman of the Police Federation John Apter will take a letter to Number 10 setting out officers’ anger.

The Police Federation of England and Wales, representing more than 130,000 officers from the rank of constable to chief inspector, passed a motion of no confidence in Home Secretary Priti Patel last week in a row over pay.

Officers who earn more than £24,000 are subject to a pay freeze this year, compared with NHS staff who will receive 3 per cent, and firefighters and local government workers who will get 1.5 per cent.