“We risk losing their huge contribution to research and the skilled economy, at a time when we need it most." 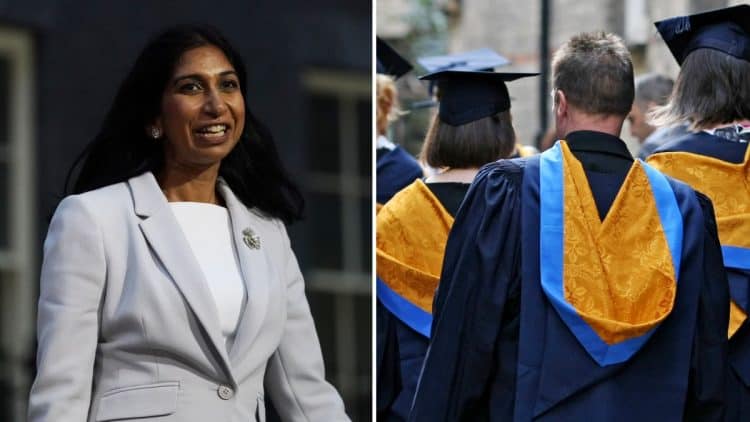 A universities leader has warned the Government risks sacrificing a “huge contribution” to the skilled economy if it puts up barriers to foreign students bringing loved ones with them to the UK.

The Home Secretary is expected to consider measures to limit the number of dependants able to accompany international students to Britain, as it reviews migration rules.

However no definitive policy on the matter has yet been set.

Suella Braverman has previously suggested the scale of foreign students coming to the UK to study is too high.

“Those people are coming here, they’re not necessarily working or they’re working in low-skilled jobs, and they’re not contributing to growing our economy.”

She doubled down on the comments at the Conservative Party conference in Birmingham, telling the Chopper’s Politics podcast that her “ultimate aspiration” would be to get net migration down into the tens of thousands while refusing to set a target for the next election.

She explained how she wanted to target student and work visas, and the dependents they can bring with them, adding: “I think we have too many students coming into this country who are propping up, frankly, substandard courses in inadequate institutions.”

Vivienne Stern, the chief executive of Universities UK, said those able to bring dependants with them tend to be older and therefore more likely to have families.

“So putting up barriers to them bringing those loved ones with them is simply going to drive them to study elsewhere,” she said.

“We risk losing their huge contribution to research and the skilled economy, at a time when we need it most.

“Far from being a free pass, dependants are subject to the same vigorous visa checks, including proof of funds to support themselves – and they all pay the NHS health surcharge up front.”