The Prime Minister’s ethics adviser said the award of the framework contracts to Topwood ‘should have been declared at the time’. 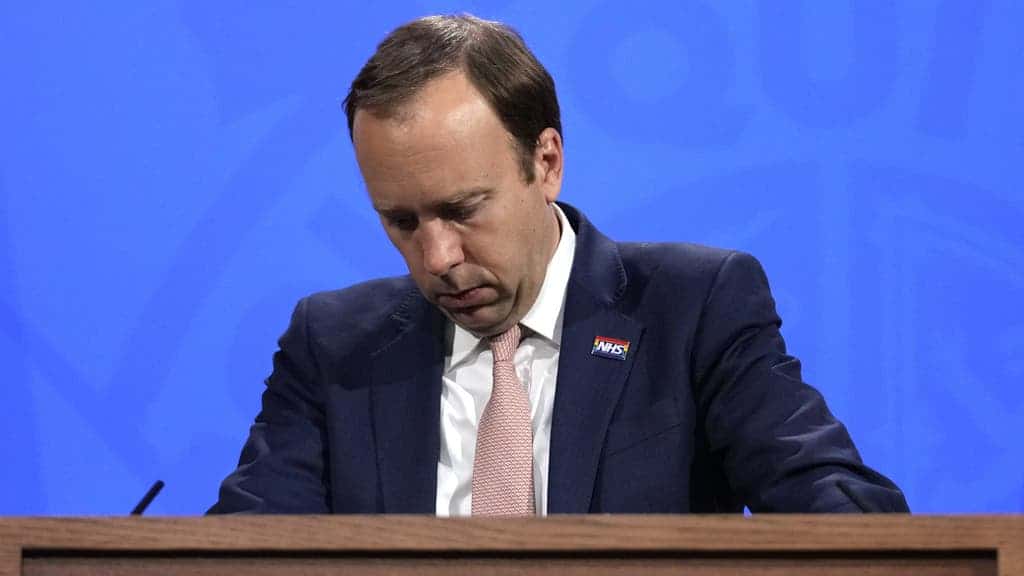 The Health Secretary committed a “minor” but undeliberate breach of the ministerial code by failing to declare that a family firm he held shares in won an NHS contract, the Prime Minister’s ethics adviser has concluded.

Mr Hancock declared in the MPs’ register of interests in March this year that he owns 20% of shares in Topwood Limited, a firm owned by his sister and other close family members, which specialises in secure storage, shredding and scanning of documents.

The company, as first reported by the Health Service Journal (HSJ), won a place on a framework to provide services to the English NHS in 2019, as well as contracts with the NHS in Wales, after Mr Hancock was appointed to his Cabinet brief in July 2018.

Lord Geidt, an independent adviser on ministerial standards, found in a much-delayed report on ministerial interests that the awarding of the contract to Topwood could be seen to “represent a conflict of interest” that should have been declared.

Breach of the rules

He said the failure to declare the link at the time was a “technical” breach of the rules.

The Prime Minister, who makes the final decision on breaches of the rules, said no further action was required in the case.

But the conclusion is likely to pile further pressure on the Health Secretary, who was accused this week of lying and failing to protect care homes at the outset of the coronavirus pandemic by former No 10 aide Dominic Cummings.

In his 10-page report, Lord Geidt said: “Given that Topwood Ltd had secured the award of a framework contract with NHS Shared Business Services, a company in which the legal personality of the Secretary of State is a shareholder, I believe there to be a danger that a reasonable person might perceive this link to represent a conflict of interest, and that it should have been declared at the time.

“I assess this earlier failure to declare the interest was as a result of his lack of knowledge and in no way deliberate, and therefore, in technical terms, a minor breach of the ministerial code.

“I have advised the Prime Minister accordingly.

“In coming to this finding, I recognise that Mr Hancock has acted with integrity throughout and that this event should in no way impugn his good character or ministerial record.”

In a letter to the Prime Minister, Mr Hancock said: “I did not know about the framework decision, and so I do not think I could reasonably have been expected to declare it.

“Nor can I see how a conflict of interest can arise on a matter about which I had no knowledge.”

In his reply, Boris Johnson told Mr Hancock he agreed with Lord Geidt’s assessment and “I do not consider that any further action is required”.

Traditionally, a breach of the code has led to the resignation of ministers, although Home Secretary Priti Patel kept her job earlier this year after being found to have engaged in bullying behaviour towards staff by Lord Geidt’s predecessor, Sir Alex Allan.

Sir Alex resigned after Mr Johnson chose to back Ms Patel following his investigation into her conduct.

Lord Geidt said Mr Hancock’s shares in Topwood could “be a reasonably perceived conflict of interest” but suggested that they could be “best managed through publication, as has occurred”.

“The Secretary of State has acted properly and honestly in promptly making this declaration and diligently seeking advice,” he added.

In the same report, Lord Geidt also found the Prime Minister had not broken the code in relation to how the renovation of his Downing Street flat was funded but criticised him for failing to take a “more rigorous” interest in the process.