"If they did, they could be used against him", Ian Dunt said. 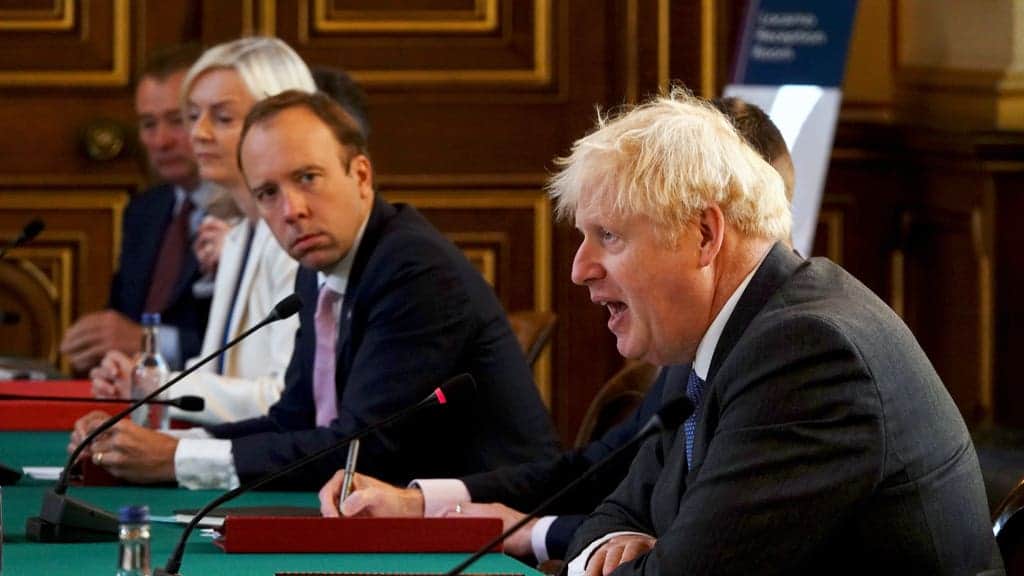 Boris Johnson’s refusal to sack Matt Hancock was “not an accident” and happened entirely “by design”, Politics.co.uk editor Ian Dunt has said.

The prime minister rejected calls to sack his health secretary on Friday after he admitted breaching the Government’s rules on social distancing.

Mr Hancock initially apologised after images emerged of him kissing a close aide who he appointed in his office at the Department for Health and Social Care (DHSC).

Labour said that his position had become “hopelessly untenable” at the time and called for him to be sacked if he was not prepared to not quit voluntarily.

However a Downing Street spokesman said that Mr Johnson had accepted Mr Hancock’s apology and “considered the matter closed”.

According to Dunt, this was “not an accident”.

Writing in the i newspaper, he said: “Hancock is part of a pattern. There is seemingly no act a minister can commit which is so outrageous that the Prime Minister will fire them.

“Former chief adviser Dominic Cummings broke Covid rules with his trip to Barnard Castle. Home secretary Priti Patel broke the ministerial code over bullying. Housing Secretary Robert Jenrick approved the Westferry Printworks redevelopment scheme a day before new infrastructure charges came into force, allowing Richard Desmond to avoid a payment of between £30m and £50m. Countless government tendering contracts have been successfully challenged in court. Many of them benefit friends or associates of the minister involved.

“Johnson has failed to respond to any of these events. In the case of the Cabinet Office inquiry into Patel, his refusal to take action led to the obscene spectacle of the independent advisor on ministerial standards feeling he had to resign instead of the minister concerned.

“And you can see why. Because once these basic ethical standards are applied, they would apply to Johnson too. And that cannot happen, because he faces more questions over his conduct than anyone else.”

The PM’s hesitancy to react has sparked a furious reaction on social media.

Matt Hancock is right to resign. But Boris Johnson should have sacked him.

A note on Matt Hancock:

For Boris Johnson to back Hancock, announcing that he “considered the matter closed” a day before the pressure caused Hancock to resign…

…shows the PM to be weak, of poor judgement & out-of-touch. Like with lockdowns, he cannot make timely decisions.

Matt Hancock was allowed to choose to leave as and when it suited him. He was not sacked. He remains an MP on £81,932 a year.
*That* is privilege.

That Hancock had just resigned shows the weakness of Boris Johnson. He should have been sacked.

Sorry seems to be the hardest word – conspicuous by its absence

It’s right he finally resigned but gutless PM should have sacked him – doubly insulting that he stood by him, saying matter was “closed”

In fact it’s wide open – including on whether Hancock broke ministerial code https://t.co/yLSo6Y81pp