Unesco has backed the Greek request for government-to-government talks about the return of the marbles. 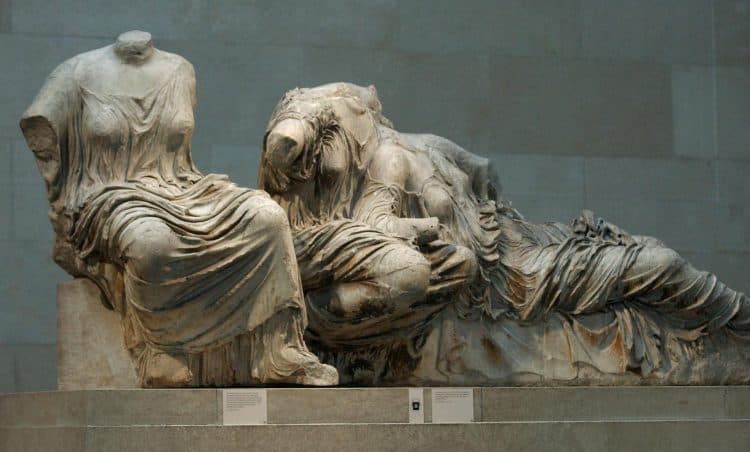 A Sections of the Parthenon Marbles in London's British Museum. The current Lord Elgin, ancestor of Lord Elgin, the British ambassador to the Ottoman Empire between 1803 and 1812 who originally brought the marbles to Britain, claimed today on BBC Radio Four's Today programme, that the Greeks could not be trusted to look after the marbles if returned to their country of origin. The British Museum, which houses the stones, has refused to hand them over despite a campaign which has been running for more than 40 years, that has recently won the backing of public figures including Dame Judi Dench, Vanessa Redgrave and Julie Christie.

Greece is renewing a bid to seek the return of ancient sculptures removed from the Parthenon at the Acropolis in Athens more than 200 years ago from the British Museum, a government official said.

Giannis Oikonomou, a government spokesman, told reporters the issue would be raised at a scheduled meeting in London on Tuesday between Prime Minister Boris Johnson and his Greek counterpart Kyriakos Mitsotakis.

The marbles, 17 figures and part of a frieze that decorated the 2,500-year-old Acropolis monument, were taken by Lord Elgin, the British ambassador to the Ottoman Empire, in the early 19th century.

Britain maintains that Elgin acquired the sculptures legally when Greece was ruled by the Ottomans.

‘Entirely up to the UK’

“The obligation to return the Parthenon sculptures is entirely up to the government of the United Kingdom,” Oikonomou said.

He added that the Greek request for government-to-government talks on the issue was backed by the United Nations’ cultural agency, Unesco.

Greece has said the new Acropolis Museum that opened in 2009 would be used to display the sculptures if they were returned.

Earlier this year, Johnson – who has described himself as “a keen scholar of Greek history” and counts Pericles as one of his heroes – used his first interview with a European newspaper since becoming prime minister to reject Greek’s request to return the marbles.

“I understand the strong feelings of the Greek people – and indeed prime minister [Kyriakos] Mitsotakis – on the issue,” he said.

“But the UK government has a firm longstanding position on the sculptures, which is that they were legally acquired by Lord Elgin under the appropriate laws of the time and have been legally owned by the British Museum’s trustees since their acquisition.”

Athens has previously hit out at alleged damp in the section of the British Museum housing the Parthenon Sculptures. The conditions the marbles were displayed in was described as an “insult” to the 2,500-year-old works by Greece’s culture minister.

Lina Mendoni’s comments in 2019 followed publication in Greek media of photos ostensibly showing damp and mould stains on the hall’s ceiling, which suffered a minor leak during a rainstorm last year.

Mendoni said the “picture of neglect” at the London museum “strengthens Greece’s just demand” for the sculptures’ return.