As many as nine seats could fall to Labour in London if it performs well. 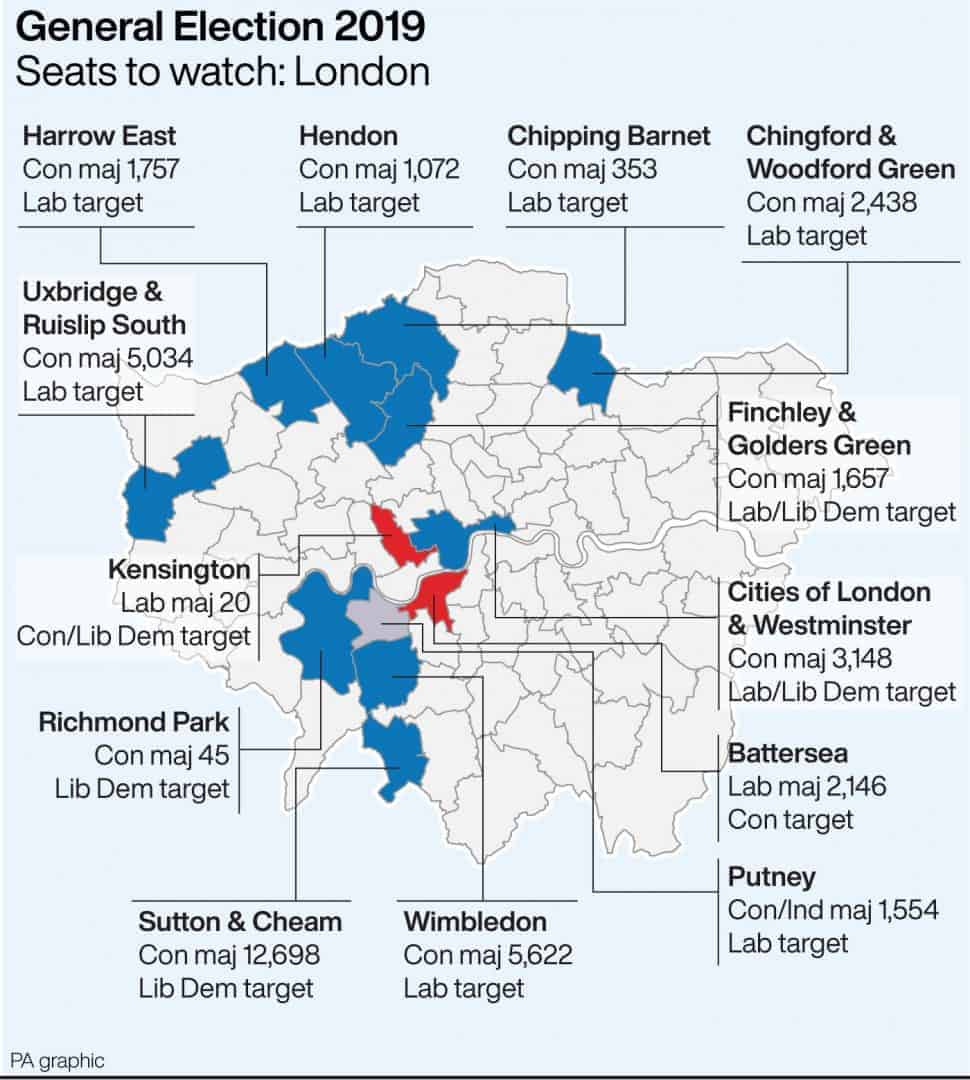 London offers opportunities for all of the three main parties to make gains on December 12 – and, perhaps crucially, to offset losses suffered elsewhere in the country.

For Labour, London is one of the key battlegrounds of the election. There are as many as nine seats which could fall to the party if it performs well, including a few that would change hands on a very small swing.

Top of the list is Chipping Barnet, being defended by Environment Secretary Theresa Villiers. She managed a majority of just 353 at the 2017 election, and a swing to Labour of 0.4 per cent would see her defeated.

Hendon (1.1 per cent), Putney (1.7 per cent) and Harrow East (1.8 per cent) are other seats that would fall to Labour on small swings, with Putney particularly worth watching given that the previous MP, Justine Greening, is not standing this time.

Ms Greening won Putney for the Conservatives at every election since 2005, though she ended her time in parliament as an Independent after disagreeing with Boris Johnson’s Brexit policy.

In Finchley & Golders Green, what started off as a two-party fight has turned into a three-horse race.

Labour needs a swing of 1.6 per cent to take the constituency, but polls suggest it is the Liberal Democrats who are now best placed to unseat defending Tory MP Mike Freer.

If Lib Dem candidate (and former Labour MP) Luciana Berger manages to win, she will have achieved a swing of more than 20 per cent.

Further down Labour’s target list are two big beasts who the party would dearly love to defeat.

One is Iain Duncan Smith, former work and pensions secretary and Tory leader, who is defending a majority of 2,438 in Chingford & Woodford Green. A swing of 2.6 per cent would see him lose his seat.

Even more of a prize, however, would be Uxbridge & Ruislip South, where the candidate defending the seat is the Prime Minister.

Such an outcome would be a historic first. No incumbent prime minister has ever lost his or her seat at a general election.

Cities of London & Westminster, and Wimbledon

Two Labour longshots are Cities of London & Westminster, and Wimbledon, both seats which would go red if Labour did exceptionally well in the capital, but where the Lib Dems might end up mounting more of a robust challenge.

The Lib Dems’ number one target in London is Richmond Park, where Conservative Zac Goldsmith has a tiny majority of 45.

There are opportunities for the Tories in London as well.

In Kensington, Labour candidate Emma Dent Coad is defending a wafer-thin majority of 20.

The Conservatives will be hoping to take back this constituency with ease – although the Lib Dems are again talking up their chances, in the shape of their candidate (and former Tory MP) Sam Gyimah.

Labour-held Battersea is also on the Tories’ target list, where a swing of 2.2 per cent would see the party overturn Marsha de Cordova’s majority of 2,416.