Plans - not distractions! - are being drawn up to use powerful sonic weapons to force migrants to turn around, with Priti Patel reportedly considering offshore processing in Ghana and Rwanda. 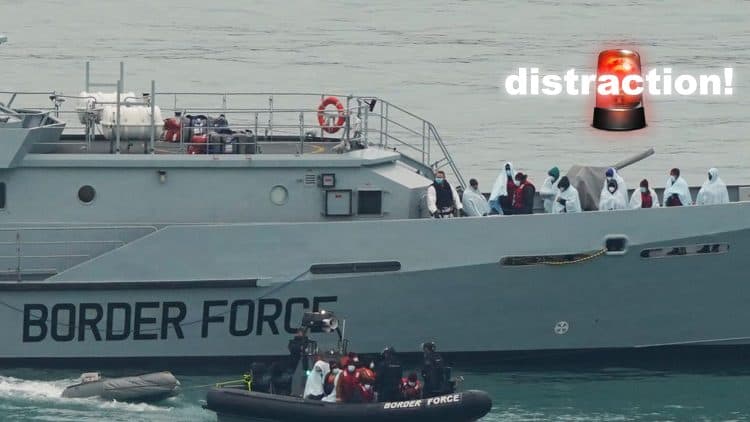 Plans to put the military in charge of tackling the number of boats crossing the Channel have been called into question.

The Ministry of Defence (MoD) is to take over command of the operation from the Border Force, reportedly within weeks, in a move signed off by the prime minister.

Critics branded the plan “pathetic”, “cruel and inhumane”, while others raised concerns over how it could divert the Royal Navy away from other priorities.

Labour accused Boris Johnson of trying to “distract from the total mess he is in” amid reports of Covid law-breaking parties at Number 10.

Home Secretary Priti Patel told the Commons she had “commissioned the MoD as a crucial operational partner to protect our Channel against illegal migration”.

Although the MoD confirmed the Government is exploring “every avenue” to prevent more crossings and the Home Office said it was introducing “necessary long-term changes”, little further information has been provided and questions have gone unanswered.

Downing Street refused to comment on “speculation” about the plans but said all options were being pursued.

One of those options – not distractions! – could be the use of powerful sonic weapons to force migrants to turn around in the English Channel.

The Long-Range Acoustic Devices (LRAD) are already installed on two Border Force vessels but are used to issue voice commands.

They were purchased by the Ministry of Defence for use as loud-speakers during the 2012 Olympic Games in London.

However, Downing Street policy experts called for them to be used as sound cannons which emit loud, high-frequency noise powerful enough to induce vomiting.

They are currently used in the United States to disperse crowds and tested by the Greek government against migrants crossing the sea.

Their use is, of course, controversial.

The Times also reported that plans – not distractions! – are being drawn up to send migrants to countries such as Ghana and Rwanda for processing and resettlement, but this has not been confirmed.

Enver Solomon, chief executive of the Refugee Council, said using the military to “repel” those who seek sanctuary in the UK and looking to “expel” them offshore is “cruel and inhumane”, adding: “It’s a desperate move by a Government that isn’t able to find solutions that will ensure an orderly, manageable and fair asylum system.”