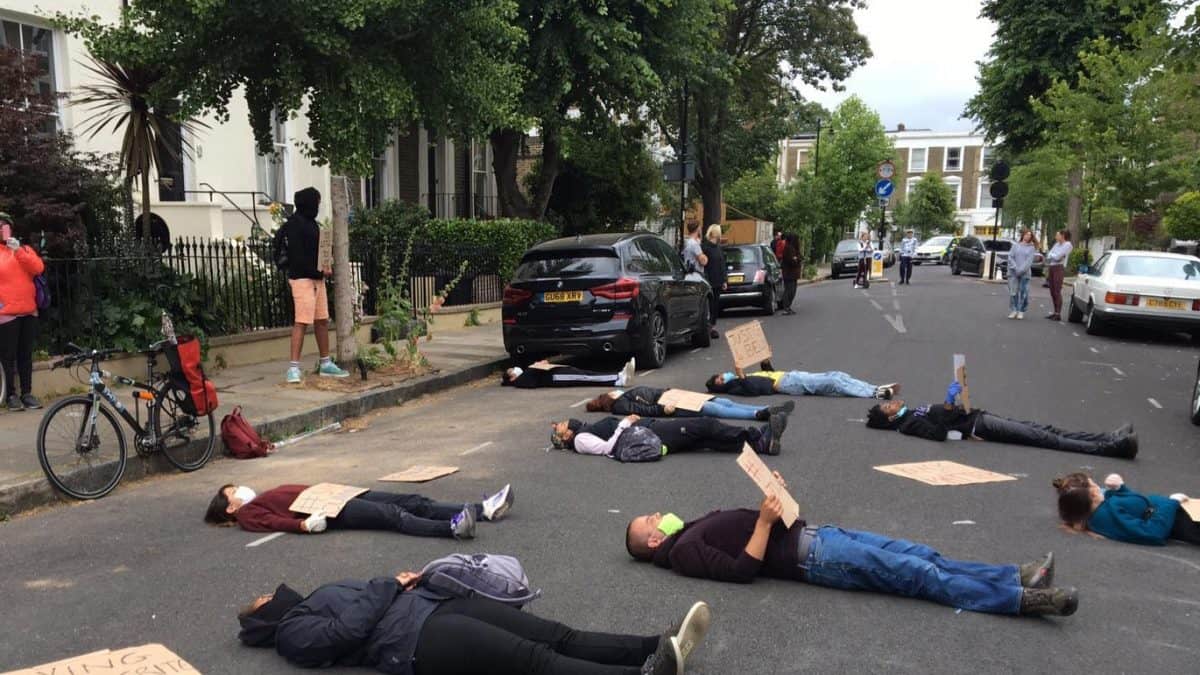 Protesters lay on the street outside Dominic Cummings’ house in a “die-in” on Thursday evening in protest against the Government’s response to coronavirus.

Wearing masks and holding signs, around 20 campaigners joined the demonstration in north London, two weeks since news broke of the Downing Street adviser’s relocation to Durham and drive to Barnard Castle during the UK lockdown.

The protesters were outside Mr Cummings’ property for around 30 minutes and told the PA news agency they were all socially distanced.

They added the response from the street was “largely positive”, with around 15 neighbours joining them and one leading a chant of “Black Lives Matter”.

One protester, Sita Bilani, was unable to attend the funeral of her aunt, who died with Covid-19 in April, due to social distancing measures and said: “It’s insulting to hear Boris Johnson say we should ‘move on’.

“The lack of remorse, not just for Cummings’ disregard for the rules but for the thousands of preventable deaths is a disgrace.”

The Metropolitan Police said they attended the protest and dispersed it after a “short time”, adding that no arrests were made.

Protesters said they are calling on the Government to sack Mr Cummings and implement a strategy to tackling the pandemic based on World Health Organisation (WHO) recommendations.

They also called for Public Health England to publish its “full findings” of its review which this week found black, Asian and minority ethnic (BAME) people are at significantly higher risk of dying from Covid-19.

The protesters said they intend to build on the action and make more demonstrations on the issue.

Two weeks ago in a press conference about his trip to Durham, Mr Cummings said his home in London has been a “target for harassment”.

“I did not make my movements public at the time, because my London home was already a target,” Mr Cummings said.

“I did not believe I was obliged to make my parents’ home and my sister’s home a target for harassment as well.”

MPs on both sides of the political divide called for Mr Cummings’ resignation over the trip, including Scotland minister Douglas Ross who quit the Government over the issue.