Dominic Raab and Priti Patel are said to be at risk of demotion in a looming Cabinet reshuffle. 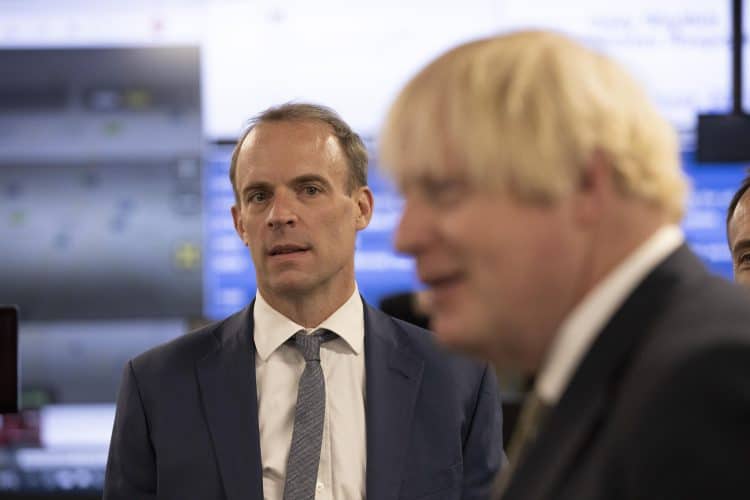 Rumours are swirling in Westminster that Boris Johnson is set to imminently reshuffle his Cabinet – with Priti Patel and Dominic Raab among senior ministers at risk of the chop.

Robert Peston, ITV’s political editor, tweeted this morning that ministers were on “reshuffle red alert”, with official drivers told to be “ready to ferry ministers at short notice” this afternoon.

And plugged-in hacks have suggested that Raab, the embattled foreign secretary, Patel, the home secretary, and Education Secretary Gavin Williamson could all be moved or sacked altogether.

According to Steven Swinford of The Times, Raab could be moved to the Ministry of Justice or the Chancellorship of the Duchy of Lancaster – with Michael Gove or Liz Truss tipped to replace him atop the Foreign Office.

He added that Williamson could lose his education brief, with Patel “said to be vulnerable”. But, he added, Jacob Rees-Mogg and Mark Spencer – the chief whip – are “both said to be safe”.

However others were quick to point out that Johnson’s expected reshuffle coincides with another important bit of parliamentary business: the vote on the slashing of the £20 Universal Credit uplift, which economists have warned will plunge millions into poverty.

Campaigners have warned that the UK will be in breach of its international human rights obligations if it pushes ahead with the planned cut.

The £20-a-week uplift, introduced temporarily to help claimants weather the storm of the coronavirus pandemic, is to be phased out from the end of the month.

The increase has been described as a “lifeline” for struggling families. According to the Resolution Foundation, it represents the biggest overnight benefit cut in British history.

Scrapping the uplift means a £5 billion hit for 4.4 million households containing 3.5 million children. Those impacted will lose, on average, five per cent of their income; a million or so households will lose 10 per cent.

The cut is opposed by six former work and pensions secretaries, charities, think tanks, teachers and MPs across the political spectrum.

And Human Rights Watch said removing the uplift would place the UK in violation of the UN’s International Covenant on Economic, Social and Cultural Rights, signed by the UK in 1968 and ratified in 1976, which sets out the rights to an adequate standard of living and to social security.

The letter, signed by HRW UK director Yasmine Ahmed, called the move “retrogressive” and warns it will do “great harm”.

She wrote: “Cutting the basic rate of support to people living on low incomes, many of whom are already in work, by more than £1,000 per year would leave many in a position where the Government’s social security system cannot guarantee their human right to an adequate standard of living.”