It is the second double-decker bus to be torched in the past week, amid protests against the Northern Ireland protocol. 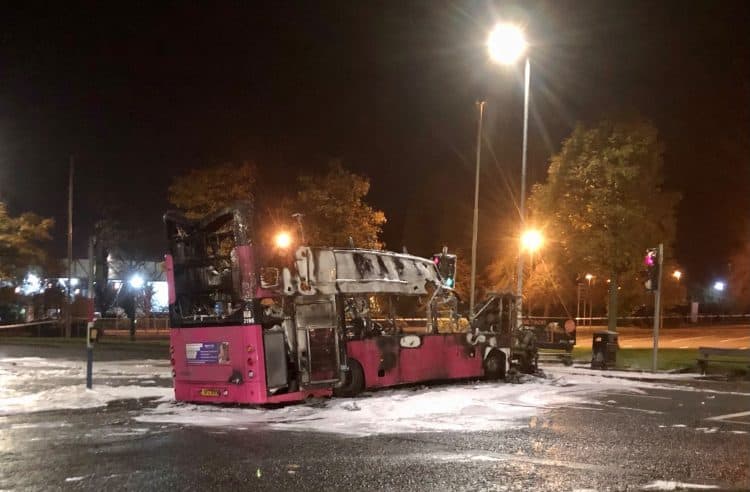 The burnt out double decker bus in Church Road near Rathcoole in Newtownabbey, Co Antrim after it was hijacked and set on fire near a loyalist estate on the outskirts of Belfast. Picture date: Sunday November 7, 2021.

A double-decker bus was hijacked and set on fire near a loyalist estate on the outskirts of Belfast on Sunday night, amid fears of violent protests against the Northern Ireland protocol.

Police said four men boarded the bus in Church Road near Rathcoole in Newtonabbey, Co Antrim, at around 7.45pm on Sunday evening – and ordered passengers to disembark.

The bus was then set alight. Nobody was injured, police said.

Protests against the control

It is the second time in the space of a week that a bus has been hijacked and set alight in Northern Ireland.

Last Monday morning, two armed, masked men boarded a bus in County Down, ordered the driver to leave and then set it on fire.

The violence involving youths from the nationalist Springfield Road and loyalist Shankill Road saw police being attacked with missiles and fireworks on Wednesday and Friday night.

Wednesday’s disorder followed a protest against the protocol.

“It is disgraceful and disgusting that our public transport workers have been targeted for attack again, this time by masked men who ordered the driver and passengers off a bus this evening and then set fire to it. This is the fourth attack this year,” she said.

“Translink buses are public assets. Without them people can’t get to and from work, or school, or hospital appointments. Our bus drivers are working class people who deserve to be safe in their jobs. People using public transport also deserve to feel safe and be able to go about their business without fear.

“The criminals behind these reckless and cowardly attacks have done nothing more than harm their local community, depriving them of a critical public service. It is another extreme act of self harm consistently rejected by the people of Northern Ireland.”

He tweeted: “Such criminal behaviour could lead to death or serious injury.

“This only harms local people and local communities. It serves no cause whatsoever.

“The ringleaders should step back. Change is brought about by politics not by burning buses.”

Sinn Fein North Belfast MLA Gerry Kelly said: “The hijacking and burning of a bus and threats to a driver in Rathcoole is dangerous, reckless and despicable.

“There is absolutely no place in our society for this criminality and violence.

“We need to see clear condemnation from unionist leaders tonight of this violence and further attempts to stir up tensions.

“Words and actions are very important, and I would urge unionist leaders to end the provocative language and dishonesty around the protocol.

“People want calm and responsible leadership to reduce tensions and ensure there is no further escalation of violence on our streets.”