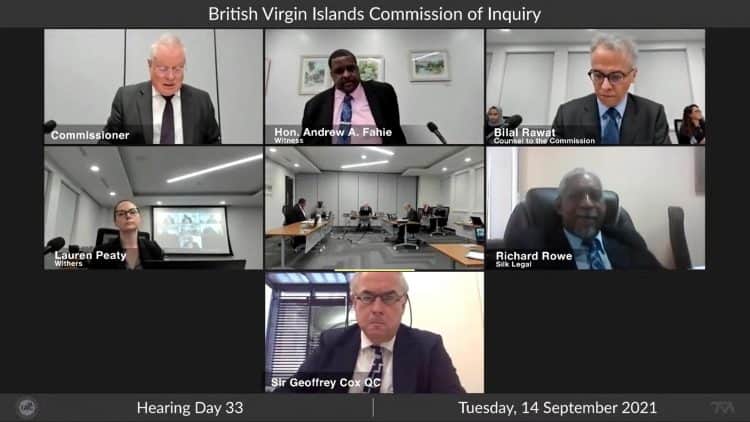 Sir Geoffrey Cox said he does not believe he has breached parliamentary rules after a video emerged appearing to show him undertaking external work from his Westminster office.

Labour has referred Sir Geoffrey to the Commons standards commissioner after The Times reported the practising barrister used his MP office in September to participate remotely to advise the British Virgin Islands over a corruption probe launched by the Foreign Office.

The QC, in a statement issued on his website, defended his decision to work with the islands – offering legal advice that could earn him more than £1 million this year on top of his £81,900 MP salary – and said he would co-operate with any investigation into his conduct.

A statement from Sir Geoffrey’s office said: “As for the allegation that he breached the parliamentary code of conduct on one occasion, on September 14 2021, by being in his office while participating in an online hearing in the public inquiry and voting in the House of Commons, he understands that the matter has been referred to the Parliamentary Commissioner and he will fully co-operate with her investigation.

“He does not believe that he breached the rules but will of course accept the judgment of the Parliamentary Commissioner or of the committee on the matter.”

‘The rules could not be clearer’

She dismissed Sir Geoffrey’s defence of his alleged actions, posting on Twitter: “Geoffrey Cox says he didn’t break the rules by using his taxpayer-funded office in Parliament to do his job as a barrister working for a tax haven being investigated for corruption.

“The rules could not be clearer. That is why the commissioner must now investigate this scandal.”

Rayner previously said the allegation that he dialled in remotely to a hearing was “an egregious, brazen breach of the rules”, which stipulate that MPs must not look to gain financially by using resources paid for by the taxpayer.

Health Secretary Sajid Javid would not comment on the specifics of the reports concerning Sir Geoffrey when questioned by broadcasters on Wednesday, but told the BBC that parliamentary offices should not be used for “personal gain in any way”.

It comes after online video footage of a British Virgin Islands commission of inquiry hearing on September 14 appeared to show Sir Geoffrey offering advice remotely from his Commons office.

The senior Conservative can be heard in the online recording telling the commissioner: “Forgive my absence during some of the morning – I’m afraid the bell went off.”

The bell referred to could be the division bell that sounds  across the Parliament estate to alert MPs to a vote taking place.

Earlier in the proceedings, Sir Geoffrey appears to vacate his seat for about 20 minutes at around the two-hour mark in the video footage.

His Commons voting record shows he voted in person on six occasions on September 14 to push through the Government’s health and social care levy.

The most recent register of financial interests showed Torridge and West Devon MP Sir Geoffrey will earn more than £800,000 from Withers, an international law firm appointed by the British Virgin Islands (BVI) government in January.

The QC also disclosed in the register that from September 28 this year until further notice, he will be paid £400,000 a year by Withers for up to 41 hours of work per month.

Issuing a defence of his work with the BVI, Sir Geoffrey said he had obtained the approval of the Office of the Attorney General of England and Wales before accepting the role.

He said in a statement: “This is not to ‘defend’ a tax haven or, as has been inaccurately reported, to defend any wrongdoing, but to assist the public inquiry in getting to the truth.”

Before the claims about his use of his Commons office surfaced, Sir Geoffrey – who was sacked as attorney general by Boris Johnson last year – faced criticism for using proxy voting, brought in during the coronavirus pandemic, to have his say in parliamentary votes while working in the Caribbean.

The 61-year-old said he had “consulted the chief whip specifically on this issue and was advised that it was appropriate”.