There is confusion over just how much cash is being invested by both Gates and the UK government. 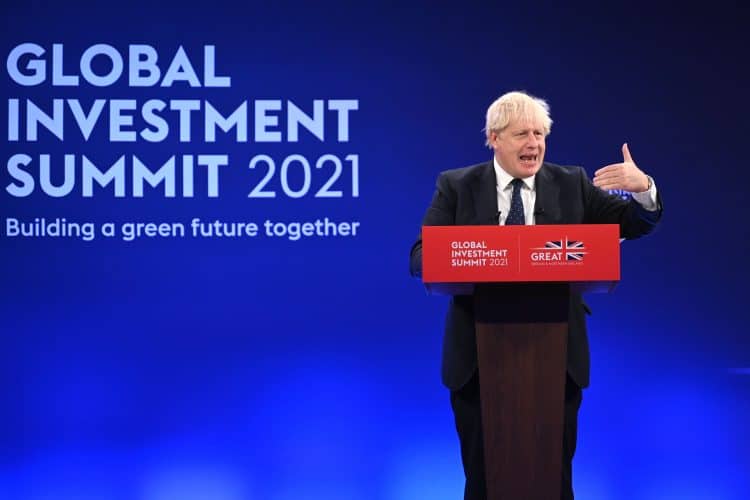 The government has unveiled plans to launch a £400 million tranche of investment in collaboration with Bill Gates to boost the development of new green technologies.

Boris Johnson claimed the deal would help a “green industrial revolution” and advance emerging technologies that were currently too expensive to be commercially successful.

Speaking at a Global Investment Summit at the Science Museum in London on Tuesday, Johnson said the partnership with the US billionaire would help Britain develop carbon capture and storage technology and green hydrogen technology.

“I think these are all technologies that have massive potential but are currently underinvested in, by comparison with some others,” Johnson said.

“We will only achieve our ambitious climate goals if we rapidly scale up new technologies in areas like green hydrogen and sustainable aviation fuels – technologies that seemed impossible just a few years ago.”

The UK has already pledged £200 million to the development of new green tech – and Gates said on Tuesday that he would match that commitment via Breakthrough Energy Catalyst, a group of private investors he leads.

But there was some confusion about just how much money was being pledged, with the billionaire claiming he would be investing £400 million in green technology research in the UK – to be matched by the government.

But Johnson said the figure was actually £200 million – half of what Gates told business leaders on Tuesday morning.

The government rolled out the red carpet for business chiefs including Microsoft founder Gates, with lavish receptions at Downing Street and a gathering hosted by the Queen at Windsor Castle on offer for some of the key investors.

Downing Street said plans being announced at the summit would see £9.7 billion of new overseas investment in the UK, creating 30,000 additional jobs.

The prime minister said the “green industrial revolution”, the freedom to deviate from European Union regulations after Brexit and the “levelling up” agenda were three reasons why firms should invest in the UK.

Johnson said the Covid-19 pandemic showed the need for governments and the private sector to work together to tackle a global crisis – with a similar effort now needed to address climate change.

Ahead of the Cop26 climate change summit in Glasgow, which starts on October 31, Johnson told investors: “I can deploy billions – with the approval of the Chancellor, obviously – but you in this room, you can deploy trillions.”

Johnson said there was 24 trillion US dollars represented in the room at the Science Museum summit.

“I want to say to each and every one of those dollars, you are very welcome to the UK and you have come to the right place at the right time.”