Boris Johnson denies he is misleading public on a customs border with Northern Ireland and new nurses for NHS. 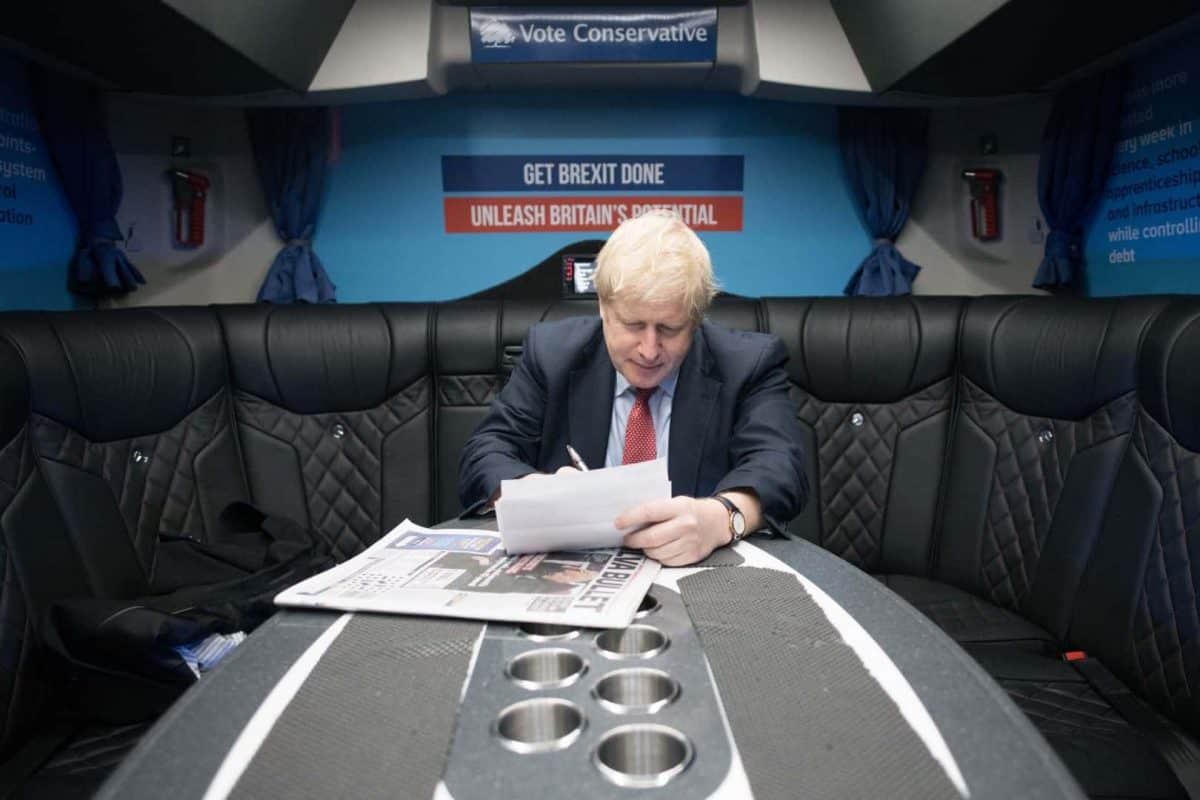 Boris Johnson has refused to say whether he would resign if he fails to win a majority in Thursday’s General Election.

The Prime Minister’s high-stakes decision to call the snap vote could hand Jeremy Corbyn the keys to Number 10 – making Mr Johnson one of the shortest-serving PMs in British history.

But, in an interview with Sky’s Sophy Ridge on Sunday, he would not be drawn on his political future when asked three times if he would stand down if he fails to secure a majority.

The PM admitted he was nervous and “fighting for every vote” ahead of the poll, but when asked if he would resign if it did not go his way, he replied: “The choice on Thursday is unbelievably stark, it’s between going forward with a one nation Conservative government that can get Brexit done…

“Or spending the whole of next year in complete paralysis with two referendums, one on Scotland, one on the EU when Jeremy Corbyn cannot even tell us what his position is on Brexit and who is going to campaign for the deal that he proposes to do.”

Pressed again,  Johnson said: “If you don’t mind, Sophy, what I’m going to do is concentrate on the five days before us because that is what I think the people of this country would expect.

“We have got a very short time to get our message across, it’s a message of hope and optimism about this country.”

Boris Johnson denies he is misleading public on a customs border with Northern Ireland and new nurses for NHS.

Johnson denied he had lied about not creating a border for goods travelling between Northern Ireland and the rest of the UK after he was contradicted by his own Brexit Secretary and internal government documents detailing customs and checks were leaked by Labour to show the public the truth on Friday.

He again insisted that there would be no checks for goods travelling between Northern Ireland and Great Britain under his Brexit deal, saying the Government documents shared by Labour were “wrong”.

But the PM told Sky: “There’s no question of there being checks on goods going NI/GB or GB/NI because they are part of – if you look at what the deal is, we’re part of the same customs territory and it’s very clear that there should be unfettered access between Northern Ireland and the rest of GB.”

Johnson said that despite a decade of missed targets under the Conservative, immigration to the UK would fall under his proposed system after Britain has left the EU.

“I can make sure that numbers will come down because we’ll be able to control the system in that way and what I don’t think is right is to have an uncontrolled and unlimited approach to that,” he said.

He also admitted that the flagship pledge of the Conservative manifesto that the NHS would be bolstered with 50,000 new nurses only actually meant 31,000 new nurses joining.

When he was asked to reveal the naughtiest thing he has ever done, Boris Johnson ignored a catalogue of political and sexual betrayals, jumping onto the Leave campaign having been ready to support Remain too, helping a conspiracy to assault a journalist or other many possible answers to reply:

“When I was riding a bicycle every day which I used to do, I may sometimes have not always obeyed the law about cycling on the pavement.

“I may sometimes, OK – but I want you to know how firmly and strongly I disapprove of people who cycle on the pavement and I think it’s wrong and I feel bad about it but I might sometimes have scooted up onto the pavement rather than dismounting before.”

And he pledged: “I still strongly disapprove of anybody breaching the laws of the road and we’ll invigilate them very thoroughly if we’re lucky enough to be returned with a working majority on Thursday which is what we need to get Brexit done and move this country forward.”