"We've always proceeded in good faith that the leaders would participate. And in every election they have, all of them. Until this one." 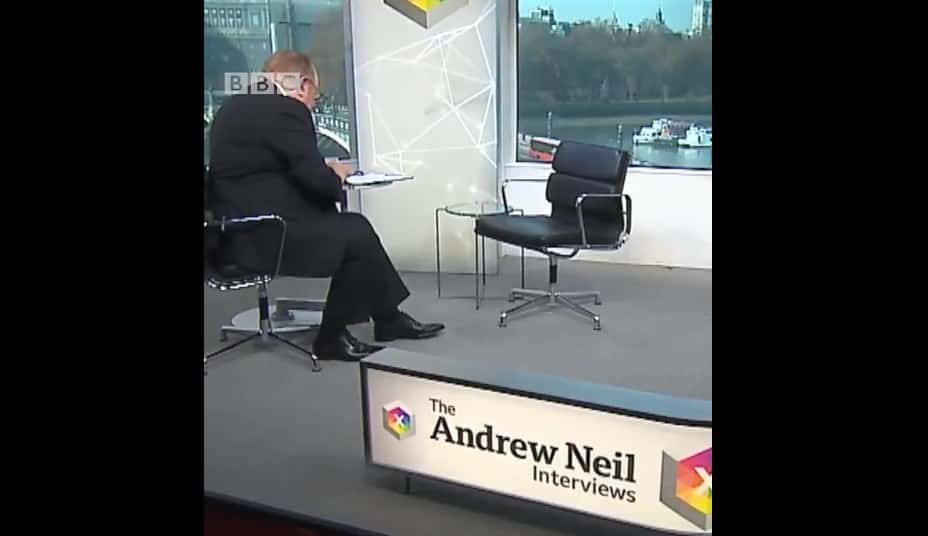 The BBC empty chaired Boris Johnson this evening as Andrew Neil made one final plea to the Prime Minister to come forward and face scrutiny.

Johnson has managed to evade the fierce broadcaster up until now, despite all other leaders putting themselves forward for questioning.

It was also revealed today that the PM has snubbed an interview with ITV’s Julie Etchingham.

Every other leader of Britain’s major political parties has agreed to appear on ITV’s Tonight programme.

Speaking after completing his final planned leaders interview with Nigel Farage, Neil made a three minute statement directly to the camera calling Johnson out for his elusiveness.

“There is of course still one to be done – Boris Johnson ,” he said. “The Prime Minister.

“We have been asking him for weeks now to give us a date, a time, a venue. As of now, none has been forthcoming.

“No broadcaster can compel a politician to be interviewed.But leaders’ interviews have been a key part of the BBC’s prime time election coverage for decades.

“We do them on your behalf to scrutinise and hold to account those who would govern us. That is democracy.”

No broadcaster can compel a politician to be interviewed

Mr Neil said it was not too late for the interview to take place – and gave a preview of the questions he’d like to ask.

And that concludes our fourth leaders interview for the general election of 2019.

There is of course still one to be done – Boris Johnson. The Prime Minister.

We have been asking him for weeks now to give us a date, a time, a venue. As of now, none has been forthcoming.

No broadcaster can compel a politician to be interviewed.

But leaders’ interviews have been a key part of the BBC’s prime time election coverage for decades.

We do them on your behalf to scrutinise and hold to account those who would govern us. That is democracy.

We’ve always proceeded in good faith that the leaders would participate. And in every election they have, all of them.

It is not too late. We have an interview prepared.

The theme running through our questions is trust, and why so many times in his career in politics and journalism, critics and sometimes even those close to him have deemed him to be untrustworthy.

It is of course relevant to what he is promising us all now.

Can he be trusted to deliver 50,000 more nurses when almost 20,000 in his numbers are already working for the NHS.

He promises 40 new hospitals but only six are scheduled to be built by 2025.

Can he be believed when he claims another 34 will be built in the five years after that.

Can he be trusted to fund the NHS properly when he uses a cash figure of an extra £34bn? After inflation, the additional money promised amounts to £20bn.

He vows that the NHS will not be on the table in any trade talks with America. That he vowed to the DUP, his unionist allies in Northern Ireland, that there would never be a border down the Irish Sea.

That is as important to the DUP as the NHS is to the rest of us.

It is a vow his Brexit deal would seem to break.

We would ask why, as with the proposed increase in police numbers, so many of his promises only take us back to the future – back to where we were before austerity began.

Social care is an issue of growing concern.

On the steps of Downing Street in July he said he’d prepared a plan for social care. We’d ask him why that plan is not in his manifesto.

Questions of trust. Questions we’d like to put to Mr Johnson so you can hear his replies.

Because he won’t sit down with us.

There is no law, no Supreme Court ruling, that can force Mr Johnson to participate in a BBC leaders’ interview.

But the Prime Minister of our nation will at times have to stand up to President Trump, President Putin, President Xi of China.

So we’re surely not expecting too much that he spend half an hour standing up to me.

“It is not too late. We have an interview prepared. Oven-ready, as Mr Johnson likes to say”

Andrew Neil issues a challenge for Boris Johnson to commit to an interview with him, to face questions on why people have “deemed him to be untrustworthy”https://t.co/daHLxEYn4r pic.twitter.com/oQ21uDdtJe