Boris Johnson was handed a lifeline by the DUP, reported The Times, when it agreed to shift its red lines on Brexit in a new deal to replace the Irish backstop. 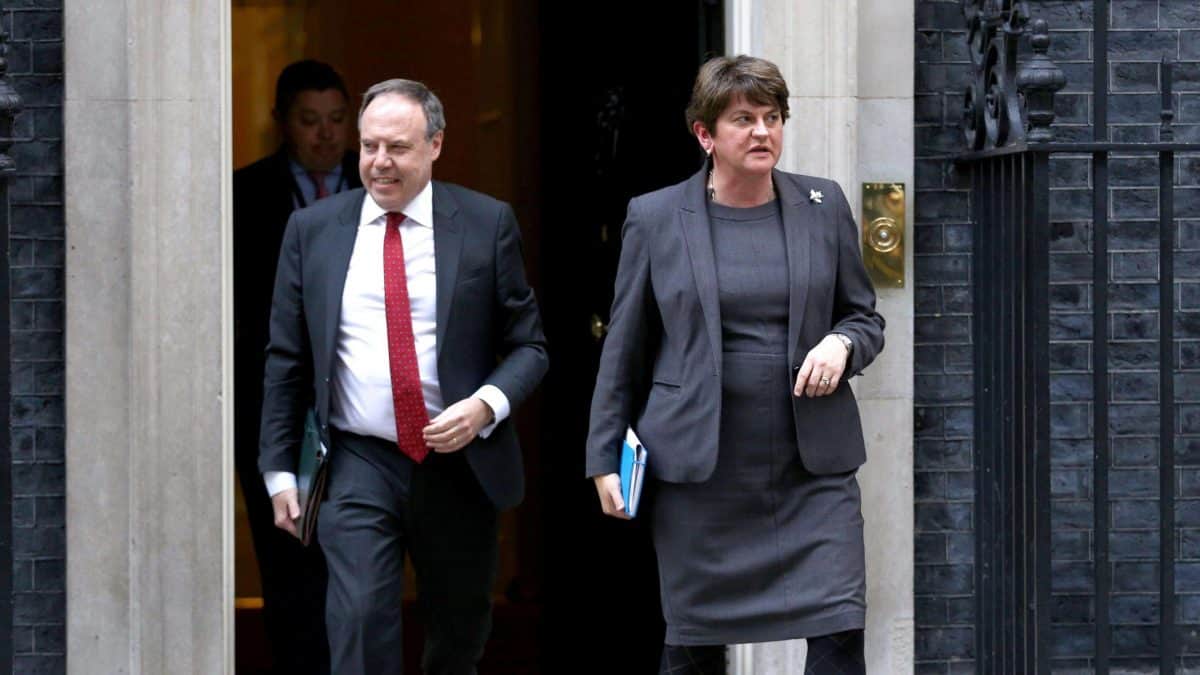 The leader of the Democratic Unionist Party (DUP) has slammed a report that it will offer Prime Minister Boris Johnson a lifeline to help him unlock a Brexit deal.

Boris Johnson was handed a lifeline by the party last night, reported The Times, when it agreed to concessions in a move that could help to unlock a Brexit deal.

A front page article in today’s Times newspaper said the DUP has agreed to shift its red lines on Brexit, saying it could accept Northern Ireland abiding by some European Union rules post-Brexit as part of a new deal to replace the Irish backstop.

The paper claimed the DUP, the biggest party in Northern Ireland, had also privately said it would drop its objection to regulatory checks in the Irish Sea, something it had previously said was unacceptable since it would separate Northern Ireland politically and economically from the mainland.

The Times, citing unidentified sources, wrote that in return for such concessions Brussels would abandon its insistence on Northern Ireland remaining in a customs union with the EU.

However, DUP leader Arlene Foster insists that, as previously indicated, any moves which did make Northern Ireland different to the rest of the UK would be unacceptable to the party.

“UK must leave as one nation. We are keen to see a sensible deal but not one that divides the internal market of the UK,” Mrs Foster tweeted.

“We will not support any arrangements that create a barrier to East West trade.”

DUP leader Arlene Foster and her deputy Nigel Dodds, who leads the party in Westminster, spent more than an hour inside 10 Downing Street on Tuesday and had insisted they had enjoyed a “very good” meeting.

Meanwhile, Mr Johnson has been warned against breaking the law over Brexit by Speaker John Bercow, who vowed “creativity” in Parliament would scupper a no-deal exit.

The warning came after the PM was forced to deny lying to the Queen in order to secure his five-week suspension to Parliament as the Halloween departure deadline looms.

A court had found that Mr Johnson had been dishonest in his public pronouncements on his reasons for proroguing Parliament. The PM had also said that he had given the Queen the same reason as MPs and the public for the controversial decision to suspend Parliament. But following the judges’ unanimous finding that he had lied about his motives, he was forced to deny that he had lied to the Queen too.

Boris Johnson had also told MPs and the public that he did not want a General Election, before accusing opposition MPs of being chicken for insisting that a no-deal Brexit should be averted before there is an election.

And Johnson continues to insist that he does not want a no-deal Brexit despite EU leaders suggesting that he still has not approached them with suggestions for negotiating an alternative to the Irish backstop.

Barnier: “no reason to be optimistic”

The warning came as the EU’s chief negotiator said there is “no reason to be optimistic” that a new agreement can be brokered before the Prime Minister’s deadline to ask for a delay.

Michel Barnier told political leaders in the European Parliament on Thursday that he was unable to say whether contacts with the UK Government would result in a deal by mid-October.

The PM is legally bound to ask Brussels for an extension to Article 50 if he cannot get MPs to back a deal by October 19, after Parliament approved legislation designed to prevent a no deal.

Outgoing Commons Speaker Mr Bercow said in a London speech that the so-called Benn Act enforcing the extension means the only possible Brexit outcome is one approved by Parliament.

Bercow warns Johnson not to break the law

The former Tory warned that it is “astonishing” that anyone has entertained the idea that the PM could disobey the law, after Mr Johnson said he would rather be “dead in a ditch” than ask for a delay.

John Bercow compared refusing to ask for a delay in “what one might regard as the noble end” of Brexit to a bank robber insisting they would give their loot to charity.

If the Government comes close to disobeying the Act, the Speaker said that Parliament “would want to cut off such a possibility and do so forcefully”.

“If that demands additional procedural creativity in order to come to pass, it is a racing certainty that this will happen, and that neither the limitations of the existing rule book nor the ticking of the clock will stop it doing so,” he added.

Mr Johnson would not have to ask for an extension to January 31 if MPs approved a deal or no-deal under the Benn Act, which was pushed through Parliament by opposition MPs and Tory rebels.

But Mr Barnier, in a speech to MEPs, suggested that negotiating a new Withdrawal Agreement remained uncertain despite discussions between Mr Johnson’s team and the EU.

“I cannot tell you objectively whether contacts with the Government of Mr Johnson will be able to reach an agreement by mid-October,” he said.

“While we have previously reached an agreement, as far as we can speak, we have no reason to be optimistic.”

The developments came on a day in which the PM “absolutely” denied lying to the Queen to get the suspension of Parliament.

Scotland’s highest civil court ruled on Wednesday that the prorogation was unlawful because it was obtained for the “improper purpose of stymying Parliament”.

Mr Johnson said the High Court in England had taken the opposite view to the Court of Session in Edinburgh and that the case would now be decided in the Supreme Court.

He also insisted he was “very hopeful” that he could secure a deal by the EU summit starting on October 17.

Meanwhile, the full opinions from the judges at the Edinburgh court emerged on Thursday evening.

Judge Lord Carloway said the “true reason” for the suspension was to reduce time for “Parliamentary scrutiny of Brexit” in a “clandestine manner”.