“It is disgusting that Ann Widdecombe would reference slavery and colonisation to describe our relationship with the EU. Her and Farage are bankrolled by elites – she’s part of the establishment which has created such a divide in this country.” 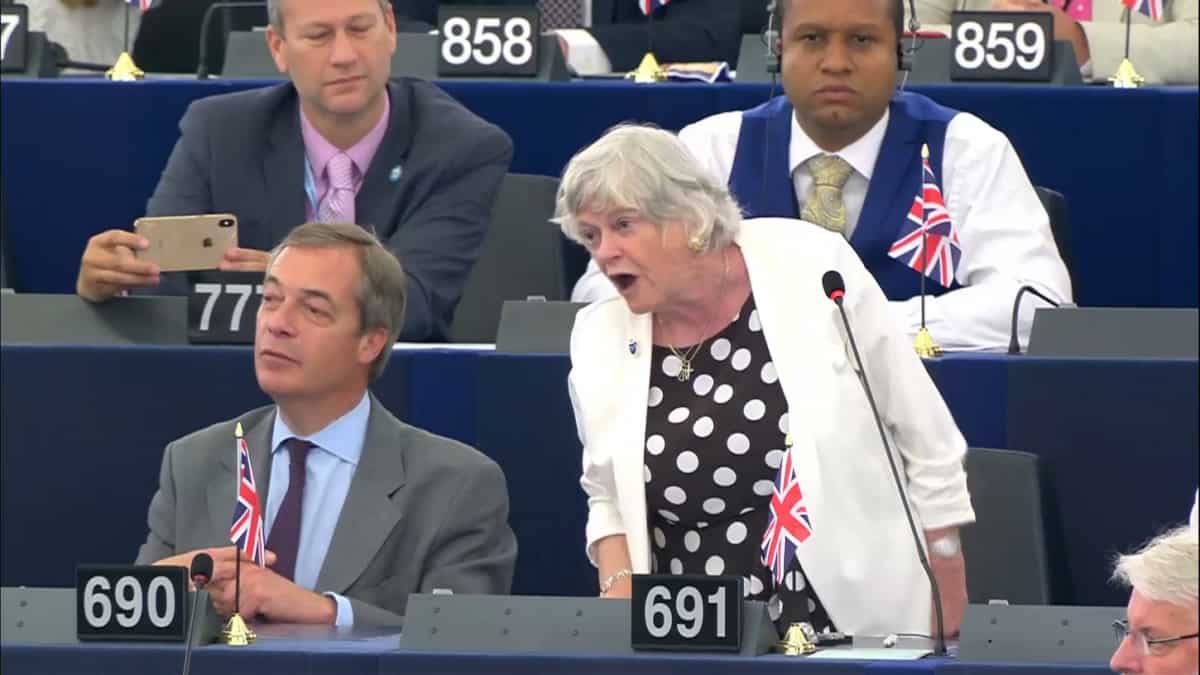 Brexit Party MEP Ann Widdecome has been criticised after comparing Brexit to slaves rising up “against their owners” in a fiery address to the European Parliament.

The former Conservative minister was making her maiden address to the parliament in Strasbourg in the wake of elections which saw a series of top EU jobs allocated behind closed doors, saying the process is “just one of many reasons” why she hopes the UK leaves by the Halloween deadline.

Standing alongside Brexit Party leader Nigel Farage, Ms Widdecombe said: “If I needed any convincing at all that the best thing for Britain was to leave here as soon as possible, it was the way that those elections were conducted yesterday.

“Because if that is this place’s idea of democracy then that is a serious betrayal of every country that is represented here.”

She continued: “There is a pattern that is present throughout history of oppressed people turning against their oppressors: Slaves against their owners. The peasantry against the feudal barons.

She then specifically called out the parliament’s Brexit co-ordinator, Guy Verhofstadt, when she referenced “colonies” rising “against their empires”.

“And that is why Britain is leaving, and it doesn’t matter which language you use: we are going, and we are glad to be going,” she continued.

After the speech, Labour MP David Lammy tweeted: “Anne Widdecombe just compared Britain leaving the EU to “slaves” rising up “against their owners”.

“It is impossible to explain how offensive and ahistorical it is for you to equate my ancestors tearing off their chains with your small-minded nationalist project. Shame on you.”

Fellow Labour MP Dr Rosena Allin-Khan tweeted: “It is disgusting that Ann Widdecombe would reference slavery and colonisation to describe our relationship with the EU. Her and Farage are bankrolled by elites – she’s part of the establishment which has created such a divide in this country.”

And Mr Verhofstadt responded: “Nigel Farage facing some stiff competition as chief clown of the Brexit Party in the @Europarl_EN. By the way, when Widdecombe talks about “colonies liberating themselves from their empires”, is she really referring to the American Revolution of 1776?”

Ms Widdecombe’s statement comes two days after her party’s MEPs turned their backs on the EU’s anthem, Ode to Joy, on the opening day of the legislature.

Tuesday marked the opening of the new five-year session of the parliament, though it remains in doubt how long the UK will remain involved.