I will ruffle his hair before public appearances and even, if necessary, lose to him at Hungry Hippos. Whatever it requires, I'm here for you, Big Dog.

by James McMahon
in Politics 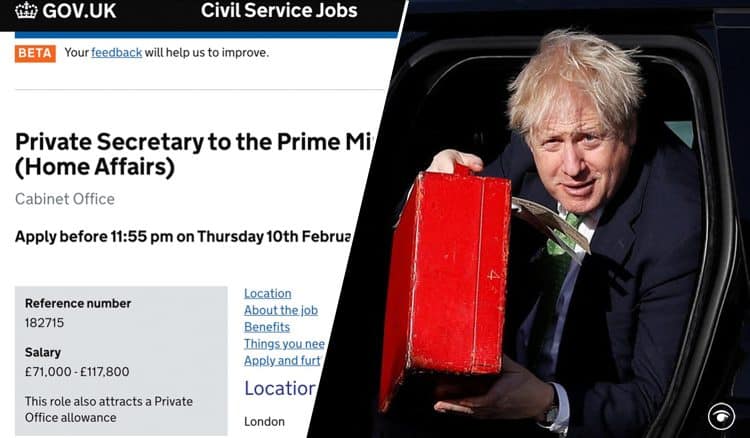 To Whom It May Concern:

I would like to apply for the role of Private Secretary to the Prime Minister (Home Affairs). Having worked within the public sector for many years, I believe that I possess and excel in the requisite skills that the role requires. I am diligent, dynamic and an excellent communicator. My father paid for me to have an excellent education at Eton. I mean, he literally paid for the certificates. I didn’t have to do anything. And I am great at karaoke – I know all of the words to ‘I Will Survive’ without having to look at the teleprompter.

Also, I once looked after my aunt’s incontinent dog when she went on holiday for a fortnight, so I have experience of dealing with difficult creatures. It was a pain scrubbing dog piss from the couch every day of her absence, but with hindsight, it was excellent preparation for a role within the corridors of power (although I hope I would be provided with an office and a desk. I don’t much fancy having to actually work in the corridors of power. Sounds drafty).

And so to ‘The Big Dog’, whom I admire greatly. I still believe that the Garden Bridge would have been a wonderful addition to the redevelopment of London, if only in preparation for the city’s complete sale to Qatar. I believe that one of my key responsibilities would be to ruffle Mr. Johnson’s hair moments before each public appearance, as part of a long-established strategy to convince the British public that their vote is going to a harmless buffoon and not a sentient dustbin. I return once again to my time dog sitting for auntie.

Additionally, I have no problem with losing to Mr. Johnson at Hungry Hippos if that is what is required to keep the PM positive and engaged in work. Nor do I mind helping with the construction of a waterslide at Chequers or running out to buy cake and booze whenever that might be required. I am aware that Mr. Johnson is fond of telling fibs, which once again, is no problem. For years I’ve been telling people that I went on the ITV fantasy gameshow ‘Knightmare’ as a child. Also, one time at Ascot, I told my friend Suzanne that horses lay eggs. I like to think that me and Mr. Johnson are cut from the same Burmese lotus flower silk.

It would be an honour in helping Mr. Johnson fend of the threat of communism from Sir K*ir St*rmer and his rabble of Bolsheviks. I do of course believe that it is crucial to our nations proud tradition of democracy that we do this in the Commons and then at the ballot box, but if needs be, I would like to state for the record that I am willing and able to accompany Priti Patel and her deathsquads on their dawn raids. This one time at Eton, me and Fabian… Ah, you don’t need to know that. But let me just say – sometimes needs must…

I believe that Mr. Johnson deserves great credit for getting Brexit done. And yet I believe the Brexit project has more to do. I am fully committed to annexing Cornwall, the Isle of Wight and all of the north of England (except Harrogate) from Britain. In fact, anyone who doesn’t stand up straight and sing the national anthem before their Sunday roast. Anything less is an insult to our great Queen, who we must protect at all cost. Her glorious rule has seen off many a vicious enemy; the Nazis, Diana and now those who wish to deny us our birthright as Britons – passports that are the colour of her blood. It has been said that Mr. Johnson disrespected our monarch by holding a party on the evening her beloved husband Phillip died. And yet I believe that slinging back shots and playing naked Twister is what the man would have wanted.

I am available for interview anytime and interviews are available on request. Just give me 24 hours’ notice and I will get daddy to write something quite impressive. I look forward to hearing from you in due course. Oi oi, let’s get the fucking beers in!