The party declared a "truly historic result" after Jill Mortimer secured a 6,940 majority. Labour held the seat in 2019 with a majority of 3,595. 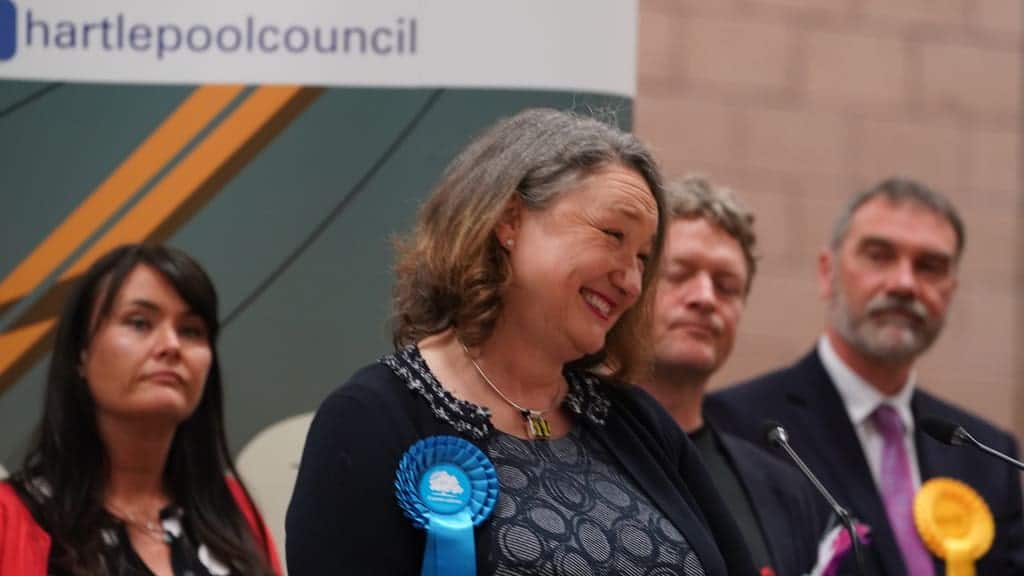 Hopes of a Labour revival under Sir Keir Starmer have suffered a blow after the Conservative Party comfortably won the Hartlepool by-election.

The Leave-supporting North East constituency went blue for the first time in its 47-year-old history, as Boris Johnson demolished another brick in Labour’s so-called “red wall”.

Voters in the town backed Tory candidate Jill Mortimer to be their next MP over Labour’s Dr Paul Williams – an avid Remainer and second-referendum campaigner during his time as MP for Stockton South between 2017-19 – in a rare by-election victory for a party in power for more than a decade.

The defeat was signalled by senior figures hours before the official announcement, with shadow transport secretary Jim McMahon telling Sky News shortly before 3am his party was “not close to winning this”.

The result will be a setback for Sir Keir, who took over as Opposition leader from Jeremy Corbyn four months after the party’s disastrous 2019 general election performance with the promise of turning it back into a winning force.

It is likely to mean questions over the strategy he has pushed as leader over the past year, with traditional Labour voters seemingly continuing to turn away from the party in the wake of Brexit.

Early results in council contests after the Super Thursday elections appeared to show voters deserting Labour, with the Tories seizing Redditch and Nuneaton & Bedworth councils in the Midlands, along with Harlow in Essex, while Sir Keir’s party saw heavy losses across North East local authorities.

A Labour source said Sir Keir would “take responsibility for these results” and for “fixing” the party’s electoral woes.

In an early sign of the discontent on the Labour left, MP Lloyd Russell-Moyle appeared to mock the party’s attempts to change its image.

As Tory sources talked up chances of a shock Hartlepool victory before the result was officially announced, Mr Russell-Moyle tweeted: “Good to see valueless flag waving and suit wearing working so well… or not?”

The comment was a reference to a leaked strategy document that suggested Labour must make “use of the flag, veterans, dressing smartly” to win back voters in red wall seats in the party’s former industrial heartlands.

Communities Secretary Robert Jenrick had sought to pile pressure on the Prime Minister’s rival before the declaration, telling Sky News that “if it is even close, I would say that is a really serious indictment of Keir Starmer”.

Alex Norris, shadow public health minister, denied that the loss was Sir Keir’s responsibility and pointed to the coronavirus pandemic as a factor in the lack of progress made in the polls under his leadership.

“In the entire period Keir has been leader we’ve been in a global pandemic and he hasn’t been able to give a public appearance yet,” he told Sky News.

“So actually, I think he has done a great job in connecting the way he has, and we’ve got more to do.”

Good to see valueless flag waving and suit wearing working so well… or not?

Hartlepool was held by Labour with a majority of 3,595 in 2019, even as other bricks in the red wall crumbled – in part due to the Brexit Party splitting the Tory vote.

Both Mr Johnson and Sir Keir made three visits during the campaign in a sign of the importance the by-election represented to their parties.

A Labour source said: “We’ve said all along the North East and the Midlands would be difficult.

“But the message from voters is clear and we have heard it – Labour has not yet changed nearly enough for voters to place their trust in us.

“We understand that. We are listening. And we will now redouble our efforts.

Following the Hartlepool declaration, attention will turn to results elsewhere as ballots continue to be counted across England, Scotland and Wales in the largest test of political opinion outside a general election.

Results from the Holyrood election – where the issue of Scottish independence was a main feature in the campaign – will come through later on Friday and Saturday.

The SNP is expected to emerge again as the largest party in the Scottish Parliament after the election, but it wants to win an overall majority of MSPs as it pushes for a second vote on splitting from the Union – something which polls suggest remains in the balance.

Mr Johnson has refused to countenance another poll, setting up the potential for constitutional fireworks over the coming years if Ms Sturgeon gets the outcome she desires.

Results of the elections – which also include the Welsh Parliament, police and crime commissioners and English local authorities and mayors – are expected to continue filtering through until Monday as counting will take longer than normal due to coronavirus restrictions.

In Wales, Mark Drakeford hopes to maintain Labour’s grip on the Senedd – but he may find himself forced to forge a new coalition to stay as First Minister.

That could mean talks with Plaid Cymru, whose leader Adam Price has committed to an independence referendum within five years if his party wins a majority.