“We’re there for the children” …. Nikki Scott talks about how losing her husband in Afghanistan motivated her to set up a charity to help bereaved Armed Forces children smile again Founding Scotty’s Little Soldiers is unquestionably my greatest life achievement. When I lost Lee, my husband and Brooke and Kai’s Dad, in Afghanistan in […] 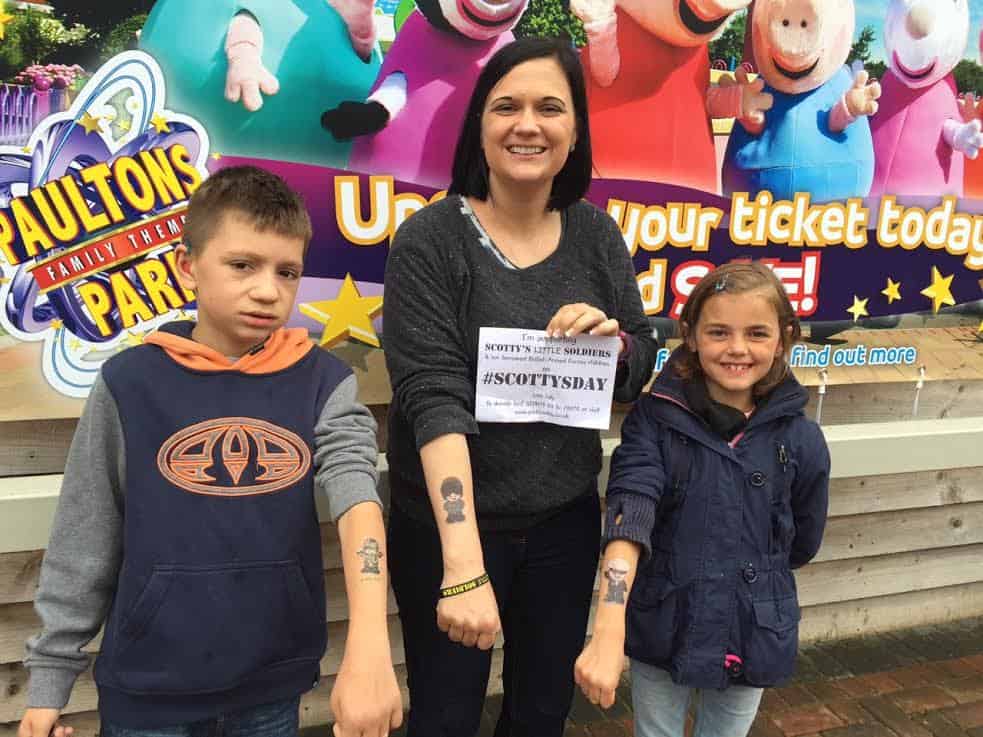 Founding Scotty’s Little Soldiers is unquestionably my greatest life achievement. When I lost Lee, my husband and Brooke and Kai’s Dad, in Afghanistan in 2009, our world was turned upside down. I’ll never forget the day I found out – seeing two cars drive up to the house with one of the men inside dressed in military uniform, I just knew. Lee would never speak about what he was doing because he didn’t want to worry us, everything was always fine. I got used to the fact that Lee was going to be away for six months at a time and, to be honest, I didn’t really think about where he was in this time and the acute danger involved in his job, I put that to the back of my mind.

When Lee was killed it really affected our two children, they’d lost their daddy and were suddenly thrown into a situation that was unfamiliar and cruel to them. It never really hit home just how much they were struggling until around 9 months after, when I took them on holiday. I realised one day I could hear Kai (5 at the time) giggling and playing. I paused, because I’d not heard him laugh in such a long time. It was a beautiful moment because it signified the start of the healing process for my children and a significant one because it was the spark that motivated me to set up Scotty’s Little Soldiers. It was on holiday that I started to think and to question just how many other children were going through the same thing. How many were suffering like Kai and Brooke. I was overcome with the need to do something about it. At this time, there was no support available which was purely for the children, which just seemed crazy, so in 2010 Scotty’s Little Soldiers was born.

To start with, my main aim was to help other children in the same situation smile again and to let them know that they were not alone. Fast forward to 2017, Scotty’s now supports 275 children all over the country. The charity is a small but fiercely hardworking one and we’ve built a big family of members.

Our support is divided into three distinct programmes: Smiles, Support and Strides. ‘Smiles’ is the charity’s core, we offer all of our members a wide range of fun activities and gifts including holiday breaks, group events, special experiences and gifts at difficult times of the year.

Our ‘Support’ programme aims to assist with the more emotional side of bereavement and includes access to professional counselling and a family support network.

Finally, the ‘Strides’ programme is designed to help with the charity’s beneficiaries’ personal development and includes a range of activity and educational grants. We’re immensely proud of the work we do but, like every charity, we need funding. We know there are more children across the UK who would benefit from Scotty’s support. We offer support to all children who have lost a parent serving in the British Armed Forces, whether they were killed in action or died of an illness or accident outside of their service.

We have a great network of fundraisers but are always looking for more people to get involved. If you’d like to get involved, please visit http://scottyslittlesoldiers.co.uk/.

Recently The London Economic published a piece about a blind veteran who now helps other ex-forces who have suffered similar injuries, read his story here.