If truth is dead, is there any hope of a resurrection?

By David McGuinness Twenty-sixteen was the year of post-truth. Even the Oxford Dictionary says so, naming post-truth its Word of the Year, calling it, “an adjective defined as relating to or denoting circumstances in which objective facts are less influential in shaping public opinion than appeals to emotion and personal belief.” Or perhaps, in other […] 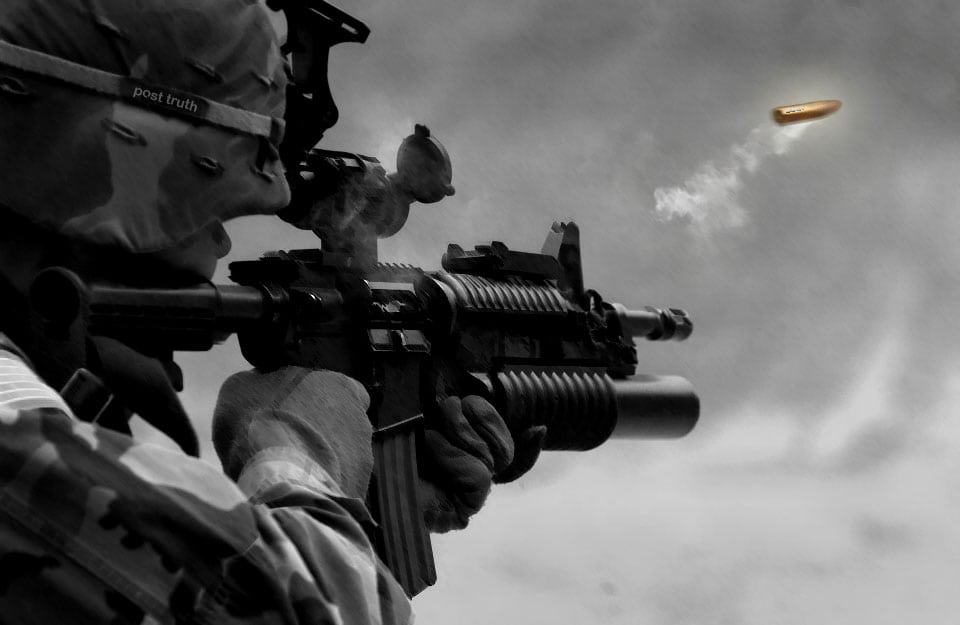 Twenty-sixteen was the year of post-truth. Even the Oxford Dictionary says so, naming post-truth its Word of the Year, calling it, “an adjective defined as relating to or denoting circumstances in which objective facts are less influential in shaping public opinion than appeals to emotion and personal belief.” Or perhaps, in other words, lying.

Yes, lies are news and the truth is obsolete, to coin a phrase. At least, that appears to be the case. But how much responsibility does the media have for the outcome of recent elections and referendums? What responsibility do journalists have to the truth? CNN’s Brian Stelter, in the aftermath of Donald Trump’s election as US President, spoke of “media vs anti-media”, referring to outlets like Fox News and Breitbart as examples of this anti-media. He went on to say:

“I do know that all journalists — all real journalists — have a responsibility to the truth, and it is not elitist to value the truth. The truth is not in a bubble. It is not elitist to reject conspiracy theories or fact-check obvious falsehoods. It should be done equally, but truth is the word we can keep coming back to. Don’t cower before the truth. Don’t tell half-truths, don’t shade the truth. Don’t fear the truth. And then we can focus on the other “t” word — trust. Winning back the trust of people who right now prefer anti-media.”

The word post-truth is not new. Its usage certainly dates back much farther than just this past year. But this year – the year that Michael Gove famously told us that the British public were sick of experts – is the year it hit the mainstream. And, it would appear, large sections of the public were unperturbed by this development. So, if the public have given up on the truth, or believe that the so-called mainstream media isn’t presenting them with all the facts, does any of this really matter?

Laura Silver, a reporter at BuzzFeed News, doesn’t agree with Mr Gove’s assessment: “I don’t think people are sick of experts, I think they’re sick of the establishment telling them that something is the case and when they ask why, the establishment says, ‘because we say so.’”

Laura’s remedy is a simple one: present the reader with both sides of any argument and let them make up their own minds.

“If you’ve got something that’s true and watertight and you lay it out for people, you’re allowing them to come to their own conclusions. I think it’s important as a news source, with any debate, to present both sides of the argument. I’m not telling the reader what to think, I’m giving them all the facts and letting them make their own conclusions. I think it’s very much about showing and not telling.”

But is the public equipped to look at any given information and come to informed conclusions, especially where the waters are murkier and the facts difficult to get at? Natalie Bennett is perhaps best known for her time leading the UK Green Party during 2015’s general election. But she also spent many years working as a journalist. And she isn’t so sure that the public are being equipped to do so.

“There’s a real education issue here. It’s interesting that that’s the opposite direction in which our education system is going, it’s going away from critical thinking and analysis and back to 1950’s style rote learning.

If we look at particularly British politics, there’s something dangerous there. What we’ve got to do is equip our young people and equip everybody with critical thinking skills and understand the need with any source to ask: where are they coming from? What’s the journalist’s agenda? Who else should I look at to see an alternative or different viewpoint?

So, what we need is active consumers of news and then we can have a whole range of news of varying qualities and directions.”

Are the public interested in the truth or just a truth? A truth that fits their own preconceived notion of the world. Alan Greenwood, former editor of scotsman.com and news editor of the print title, sees some merit in this way of thinking.

“With the advent of social media, it’s far easier to challenge newspapers or to set up an alternative narrative on any given story. And, based on what you believe, you can pick the narrative that suits your mindset best and just go with it without having to worry about whether you’re right or not.

It’s not a choice between believing the truth and believing something is wrong. It’s just deciding to go with the spin that suits your own truth best.”

It isn’t just the media that has a “truth problem.” Certainly, politicians have long been accused of spinning facts to suit their agendas. And Natalie Bennett is keen to emphasise that it isn’t just media institutions that need to change the way they operate.

“We have a real problem with all of our institutions: media, universities, think tanks, mainstream organisations that have drawn on a very narrow set of views for a long time and those views have failed. People know that, so they’re not trusting.

The way to restore trust is for all those institutions, including the media, to draw on a much wider range of voices, by being much more pluralistic, much broader, drawing on a much broader range of sources. Working class communities say we don’t hear ourselves there, we don’t hear our concerns there from the media. And denying that false balance thing by ensuring there are a variety of voices there.”

There are no easy answers. No clear path back to a time where facts trumped all, if indeed such a time ever truly existed. But, as one great journalist once said: “Journalism is just a gun. It’s only got one bullet in it, but if you aim right, that’s all you need. Aim it right, and you can blow a kneecap off the world.” And truth, surely, is the .950 caliber rifle to do the job.