"The paper is taking selective reporting to a whole new level," the Private Eye noted this week. I tend to agree.

by Jim Felton
in Opinion 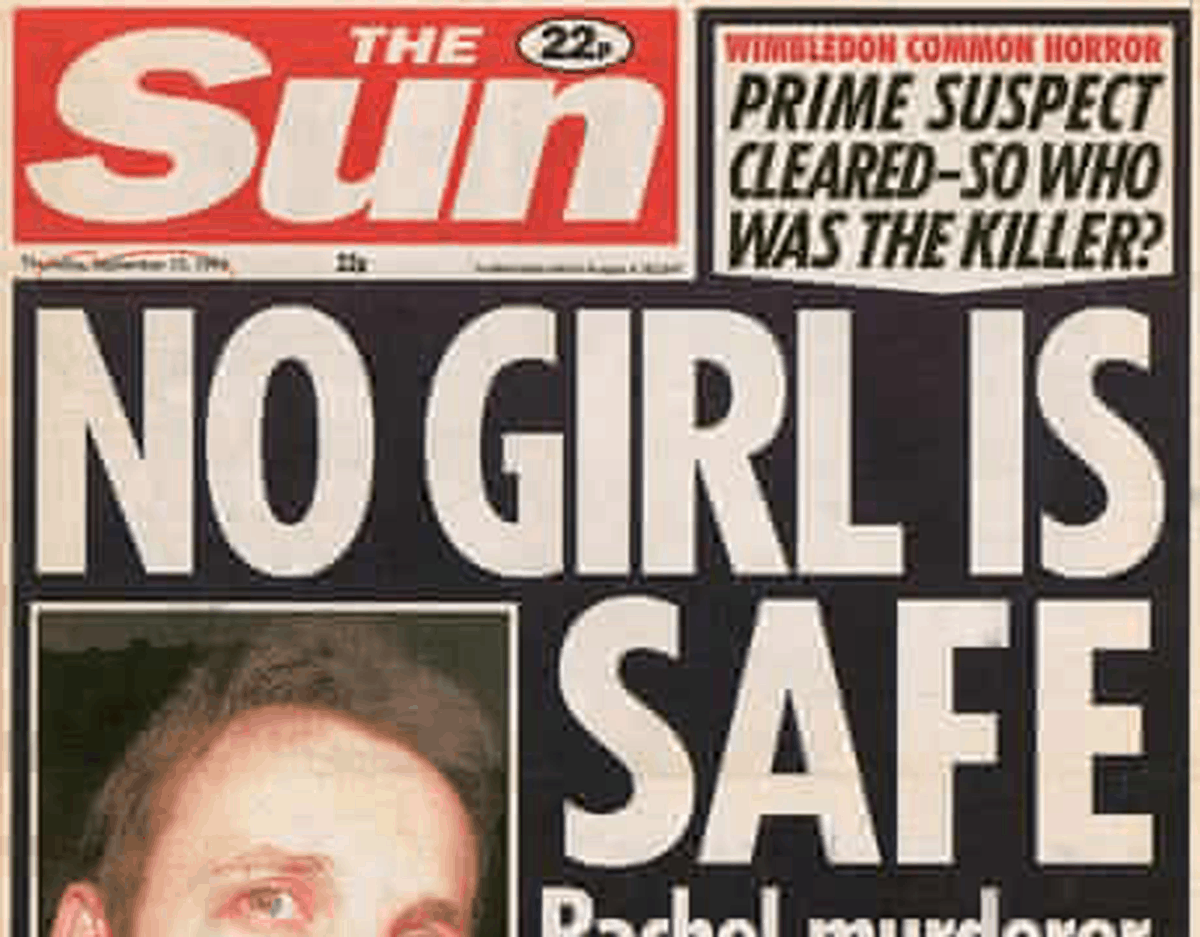 On Sunday, The Sun newspaper printed a two page spread bidding farewell to “The Sun king of the scoops” John Kay.

The piece called him “the greatest journalist of his generation” and praised him for being “everybody’s mate”, listing off scoops he obtained on behalf of the paper over his long career. Maybe he really was as good as they said he was, because they appear to have been unable to find out that their colleague had killed his wife, Harue, in 1977.

Kay had a nervous breakdown and drowned Harue in the bathtub, before attempting suicide, for which he was convicted of manslaughter on the grounds of diminished responsibility. He was sent to treatment at a psychiatric hospital, before returning to work for The Sun.

In the space where they could have divulged this information, they spoke about how he “always carried a neatly ironed handkerchief”, as well as how kind and generous he was as a person. While you could be generous and say The Sun was trying not to make a man’s worst moments during a mental breakdown define him, you’d think out of respect to his victim it might warrant at least a bit of a mention. It’s also not a courtesy the paper has extended to other “killers”, even when it later transpires that they are innocent, as the following extract from my book Sunburn: The unofficial history of the Sun newspaper in 99 headlines shows.

On 15 July 1992, twenty-three-year-old model Rachel Nickell was stabbed to death on Wimbledon Common in front of her two-year-old son.

A media frenzy ensued. It had all the usual factors The Sun liked in a murder mystery: an attractive (or, in the case of child murders, ‘adorable’) victim, and a murderer presumed to be a stranger still on the loose. The Sun called the case ‘beauty slain by the beast’.

The police were under pressure to find the killer, although this does not excuse what happened next. They arrested a lot of suspects. Not just a few, but a  number that makes you think they were employing the ‘murderer says what?’ method of building a case to round up some more suspects, or even ‘he who smelt it gets twenty-five to life’.

On the twenty-seventh arrest (not the last), the police finally thought they had their man. They do say twenty-seventh time’s the charm (I imagine, probably after they’ve fucked up the first twenty-six). This was Colin Stagg, an unemployed  man from nearby Roehampton who regularly walked his dog  on the Common.

NO GIRL IS SAFE

The police had launched a (highly unethical) sting operation, getting an undercover cop to pose as someone romantically interested in Stagg and also in Satanism over the course of five months, in an attempt to get him to confess to a murder he didn’t actually do by saying subtle stuff like ‘If only you had done the Wimbledon Common murder, if only you had killed her, it would be all right.’ He didn’t confess, because when you’re not into Satanism or murdering you tend not to, even when asked by a date, but spent a year in custody before the judge threw out the case, calling the sting operation ‘deceptive conduct of the grossest kind’.

The Sun covered this under the headline ‘NO GIRL IS SAFE Rachel murderer will strike again’.  (By the by, it strikes me as quite weird to say ‘girl’ when you mean an adult woman. I can’t imagine how it must have felt to read that headline and feel both overwhelming existential dread and also quite patronised. Like someone saying, ‘There, there, you’re going to die, little lady.’ But as this kind of  language was pretty standard  for The Sun, let’s get back to Stagg.)

Along with the headline they had prominent pictures of Stagg looking like, well, a bit of a murderer (sorry, Colin). The piece asked ‘PRIME SUSPECT CLEARED – SO WHO IS THE KILLER?’, but still the media trial went on. The News of the World had Stagg take a lie-detector test, which he passed (lie detectors are dodgier than an undercover police officer posing as a Satanist, but let’s ignore that for now).

The papers continued to vilify him. Stagg ‘slowly settled into the life of a recluse’, as he wrote years later in his book about his experiences, Pariah. The real killer, Robert Napper, would later confess to manslaughter on the grounds of diminished responsibility – while already serving a sentence for two other murders – clearing Stagg entirely.

I’ll be honest, it seems a tad unfair to be so angry at a person your own headline explains was cleared of murder. He was innocent, but I’d argue the headline made it look at first glance like there was some doubt there. Imagine  being branded ‘not a murderer Colin’ for the rest of your life,  while all the other Colins are just called ‘Colin’. It’s like calling someone you don’t like from accounts ‘not a sex pest Jan’ or ‘definitely not into a bit of GBH Pete’.

They still weren’t done with him, and later published a piece on how ‘Colin Stagg has spent ALL of the £750k payout he got for being wrongly accused of murdering Rachel Nickell – after blowing the cash on luxury cars and holidays’ (10 July 2017). A real ‘innocent man used his own money how he wanted to use it’ shocker. The piece – as well as awarding him an extra £44,000 payout he wasn’t given – made it clear the real killer had been arrested, at the same time as using needlessly ambiguous phrases like ‘Stagg (pictured in 1994 leaving the Old Bailey) became the most hated man in Britain when he was jailed for the stabbing – but was later freed’.

Suspicion around Stagg  continued long after he was found to be innocent, and pieces about his intimate life – which he says were untrue – published in the News of the World alleged that ‘weirdo’  had asked for ‘bizarre sex’ with his ‘terrified’ girlfriend close to where Nickell was murdered.

In a rare happy(ish) ending, Stagg ended up getting some more money, and from News International – the parent company of the Times, Sunday Times, the Sun and the News of the World, now known as News UK – itself. In 2011, he was informed by the Metropolitan Police that he had been hacked by the News of the World, six years after he was acquitted of the murder.

One standard for the public, another for their mates

He ended up accepting substantial damages from the paper in an out-of-court settlement. He saw this specifically as ‘sweet revenge’ on the News of the World itself, which had also blagged their way into getting his medical records.

‘They published two pages of complete lies about my so-called deviant sex life,’ he told the Evening Standard at the time of the settlement in 2012. ‘It was total make-believe, but at that time I had neither the money nor the reputation to fight back. All that changed when the Met contacted me 18 months ago to reveal I had been a hacking victim in the early 2000s.’

‘Justice has been done and I’m very pleased. I look on this money as part payment for all the years of vilification I suffered at the hands of the press in general”.

The Sun has since published a line in their online obituary, stating that “after speaking to our valued charity partners, we want to make clear that in 1977 John Kay pleaded guilty to the manslaughter of his wife, Harue, on the grounds of diminished responsibility.”

As mentioned at the beginning of the piece, the paper could have clumsily been trying to treat Kay’s breakdown with kindness (at the expense of Harue’s death being completely glossed over), but from the Sun – who published such articles as “1,200 killed by mental patients“, “Werewolf seized in South End” and consistently prints pieces that call for tougher punishments, it reeks as having one standard for the public, and quite another for their mates.

Sunburn: The unofficial history of the Sun newspaper in 99 headlines by James Felton is currently on sale for 99p