UK policing is not perfect; genuine allegations of excessive use of force need to be investigated, but the simple fact is that our police service is the most restrained and compassionate in the world despite the huge pressures upon it. 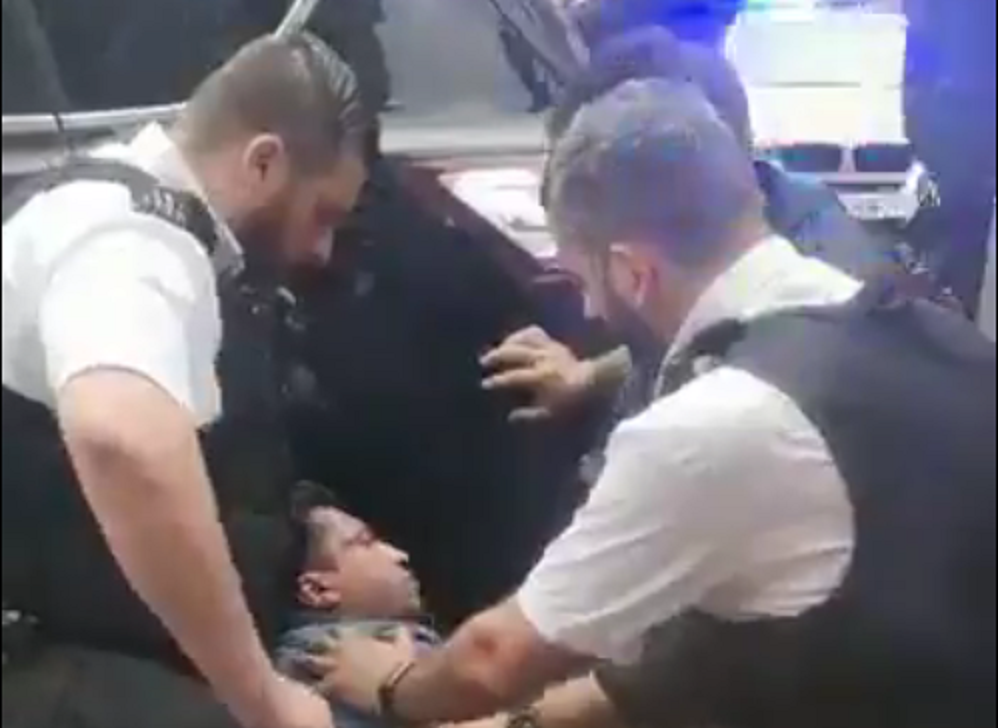 Over the past few days, an incident involving police officers and an errant motorist has featured prominently across both social and mainstream media. It has provided ammunition for those who traditionally oppose the police and angered the police community who have become weary of the constant flow of criticism which never seems to be balanced with simple praise.

When I first viewed footage of the incident, it was muted and, in all honesty, it looked like a fairly typical if somewhat untidy arrest as indeed most arrests are when the individual concerned is ‘resisting.’

Only when I viewed the footage with the sound, did I realise that this would evolve into a major issue. The piercing screams of the arrestee’s wife and her attempts to intervene were always going to lead to the perception that this was an incident that involved ‘excessive use of force’ by the officers.

police brutality in the United Kingdom, London, Aberfeldy. This is so disgusting and uncalled for, this must be spread around & these officers must face the consequences. Pls spread awareness pic.twitter.com/Ftd9OledvI

Whilst the footage of the officers struggling with the arrestee went viral, the video which showed how the incident began received much less coverage.

The car could be seen parked on a yellow line yet the argument that as a disabled badge holder the driver was entitled to park there, was totally without foundation as the parked vehicle was within 15 metres of the junction thus obviating that concession.

The Met stated that the car’s position was forcing vehicles to take a wide berth resulting in them driving in the oncoming lane. Parking close to a junction also runs a risk that a car turning that corner at speed could run into the back of the illegally parked vehicle.

What became obvious early on in that footage was that the arrestee was actually filming his conversation with the officer. That in itself, would be interpreted by many as confrontational. The officer asked the individual on a number of occasions to move his vehicle or to produce his licence for examination as required by the Road Traffic Act. Despite these requests and warnings that he would be liable to arrest, the arrestee not only refused but recorded his own refusals on his mobile phone. Eventually enough was enough and the footage abruptly ended with the officer approaching the driver to place him under arrest.

Taking to the floor

It looked as if the officer intended to cuff him to the front; this is normally reserved for those likely to be compliant. Clearly the arrested man resisted with some force as the next footage, taken by passers-by, shows him on the ground with officers struggling to restrain him.

The struggle and the screaming of the female attracted a crowd who fortunately opted to film rather than physically intervene as the officers attempted to place him in handcuffs, behind his back. That is never an easy task yet, when achieved, reduces the ability of that individual to attack the arresting officers.

Officers will generally prefer to deal with a subject who resists or is violent, by ‘taking them to the floor.’ It reduces the chances of them (the officers) being kicked, punched, head-butted, bitten or spat at and gives them a measure of control. The ideal number of officers is five; one for each limb and one officer to control the head. This form of restraint reduces the danger to both the officers and the person arrested.

There is, however, no magic formulae for dealing with a person resisting and many of the moves seen on police drama series are just fiction. Options of a baton, gas or even a taser were clearly not appropriate here. They may have been utilised, however, if this incident had occurred abroad.

It’s not always as it seems

The ‘gone viral’ Poplar incident mirrors several others that have featured on social media and which have provided valuable ammunition for those politicians, activists and others whose contempt for ‘brutal, racist police’ is absolute.

In one incident, duly filmed, a male fitting the description of a stabbing suspect and openly smoking a spliff was, unsurprisingly stopped and searched. He resisted, was taken to the floor and the filmed incident again went viral drawing hostile comments from activists etc.

Such footage frequently omits, for one reason or another, that which led up to the individual being physically restrained by police. All that can be seen are officers struggling to control the individual which leads to complaints of ‘brutality.’

Recently, at Waterloo, I assisted BTP officers as they took a male to the floor who was resisting stop and search. As attempts were being made to handcuff him to the rear, he was shouting abuse at the officers (and myself). Anyone filming from this point would probably have had some potentially viral footage on their hands of a black male being pinned to the floor by racist police.

It would not have shown officers running across the station concourse to assist the security guard, who was black or the fact that that after being searched, the man was found in possession of stolen goods, cannabis and a knife.

There has been some concern, with attacks on officers increasing in both number and severity, that their training is less than adequate; officers, with the occasional exception, are not martial arts experts. Indeed, their training normally consists of a single day’s ‘Officer Safety Training’ every six months.

In some forces this is just one ‘OST’ session a year. Be it a day or two days training a year, this is clearly not enough time to reinforce techniques previously taught and learn new ones in what is a complex field.

However, it should be remembered that each arrest, and there are nearly a million a year, is an exercise of force and police may use proportionate force to ensure compliance which enables that arrest to be affected. This includes punching and even the infliction of a degree of pain. The issue is, as stated, whether the force applied is proportionate.

In respect of the Poplar arrest, if the screaming distress of the female were removed, similar ‘taking to the floor’ arrests occur across the UK on a daily basis and are especially prevalent on Friday and Saturday nights when police have to deal with drunken thugs in towns and cities across the UK. Such arrests can also be seen on the plethora of police fly on the wall documentaries.

The arrestee, later named as Mr. Younnes Bentahar, appeared to suffer some form of seizure during the arrest and was immediately taken to hospital. The fact that he apparently lost consciousness means an investigation by the Independent Office for Police Conduct who are distrusted by police rank and file. Unusually, however, the Met issued a statement supportive of its officers within a day having viewed the officers body worn cameras.

UK policing is not perfect; genuine allegations of excessive use of force need to be investigated, but the simple fact is that our police service is the most restrained and compassionate in the world despite the huge pressures upon it.

Sadly, the MSM, certain politicians and activists of both right and left, prefer to focus on alleged and often spurious transgressions rather than the numerous acts on police bravery, kindness and self-sacrifice that take place of a daily basis.