Fairtrade's global network of farmers and workers have sent an open letter to world leaders urging them to keep their climate pledges. 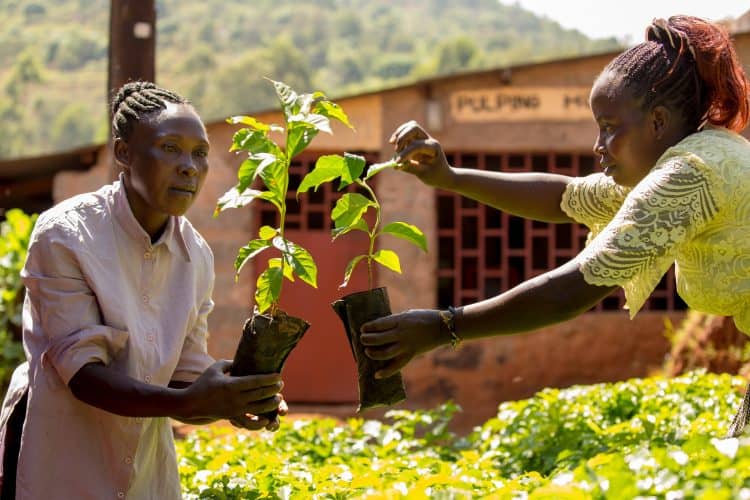 When the long-anticipated COP26 climate summit begins in under a fortnight’s time, all eyes will be on Glasgow, where world leaders will grapple with the biggest crisis of our lifetime. The stakes are high; delayed a year by the pandemic, these talks represent our last, best chance to avert climate catastrophe.

Failure to agree on ambitious emissions cuts and deliver on financial pledges will spell disaster for generations to come, and for current generations already living with the damaging reality of climate breakdown worldwide.

At Fairtrade, farmers and agricultural workers have told us that climate change is the single biggest threat to their livelihoods. They and their communities stand on the frontline of a crisis they have done the least to cause. It is a grave injustice. As the grand-daughter of a tea farmer myself, I have seen first-hand the devastating impacts of climate change in my home country of Kenya.

Yet, while the world’s wealthiest 10 per cent are responsible for 50 per cent of global emissions, it is those earning the least in low-income countries like mine who are being forced into extreme hardship by climate change, and suffering its worst effects: from more frequent and intense floods, droughts and storms, to the loss of fertile land, the emergence of new pests and the spread of crop diseases.

Here in Africa, temperatures are rising more rapidly than the global average, with extreme weather events and more frequent rainfall now expected across the continent, jeopardising the viability of crops such as cocoa and coffee. This is not just a problem for agricultural communities: it affects us all, since 80 per cent of the world’s food comes from 500 million family farms.

Farming communities with decades of experience in stewarding land are already using their expertise to tackle the climate crisis. For instance, Fairtrade’s Climate Academy brought coffee farmers across East Africa together to learn and share ways of equipping their farms to withstand extreme weather events. More widely, Fairtrade farmers continue to plant thousands of trees on their farms, use organic fertilisers and have embraced solar energy for their lighting and cooking needs; a passionate demonstration of their desire to tackle the negative effects of climate change.

While important, such efforts are simply not enough: the vast majority of small-scale farmers lack the financial resources they need to build resilience to climate change. Deeply unfair and entrenched global trade systems still trap many in poverty.

A case in point is this month’s announcement of a sharp drop in the purchase price farmers in Côte d’Ivoire will receive for their cocoa. The new cocoa farmgate price is 18 per cent below the October 2020 harvest value. It is a real blow for farmers, falling far short of what they need to ease the burden of poverty, let alone adapt to the changing climate.

Although Fairtrade cocoa cooperatives in Côte d’Ivoire will still earn the Fairtrade Minimum Price for their crop – a vital safety net – many more farmers don’t have the financial protections Fairtrade offers. When they already struggle to afford essentials like healthcare and children’s schooling, because the prices earned for their crops is far too low, how can we expect them to meet the cost of climate adaptation and mitigation measures?

Change is not happening quickly enough. This is why Fairtrade’s global network of farmers and workers have sent an open letter to world leaders, urging governments to honour their pledges to farming communities.

“We grow the food eaten at the tables of people all around the world, as well as other essential produce. But our ability to do so has been badly damaged by the reckless harm done to our environment from years of broken promises concerning the climate crisis,” says the letter, which is titled ‘Be Fair With Your Climate Promise’.

Fairtrade farmers want to see four urgent actions taken at COP26. First, world leaders must ensure the annual $100 billion they promised to enable low-income countries to fight climate change reaches those who need it most. Second, governments must be honest about the carbon emissions they are ultimately responsible for, including aviation and shipping emissions.

Ohene Boafo, a Fairtrade cocoa farmer in the West Akymen Farmers Union, Ghana, explains why the letter is so critical: “In the past, we knew when the rains came and when the sun shone: climate change has brought a lot of negative effects on our farms… The crops do not grow well, the farming season does not last like it used to. We would like governments and world leaders to deliver on their promises concerning climate change. This will improve our lives.”

Voices like Ohene’s must be heard by governments at COP26. It’s encouraging that Fairtrade’s corporate partners internationally have signed a business pledge urging political leaders to listen to the farmers. We’re now inviting members of the public to show solidarity with the farmers’ call, by signing a global petition.

It’s time world leaders ended their trail of broken promises, for all of our sakes.