I’ll never forget one of the first things my mum said to me when I came out, “…but I don’t want you to get aids!”

by Dan Harding
in Opinion 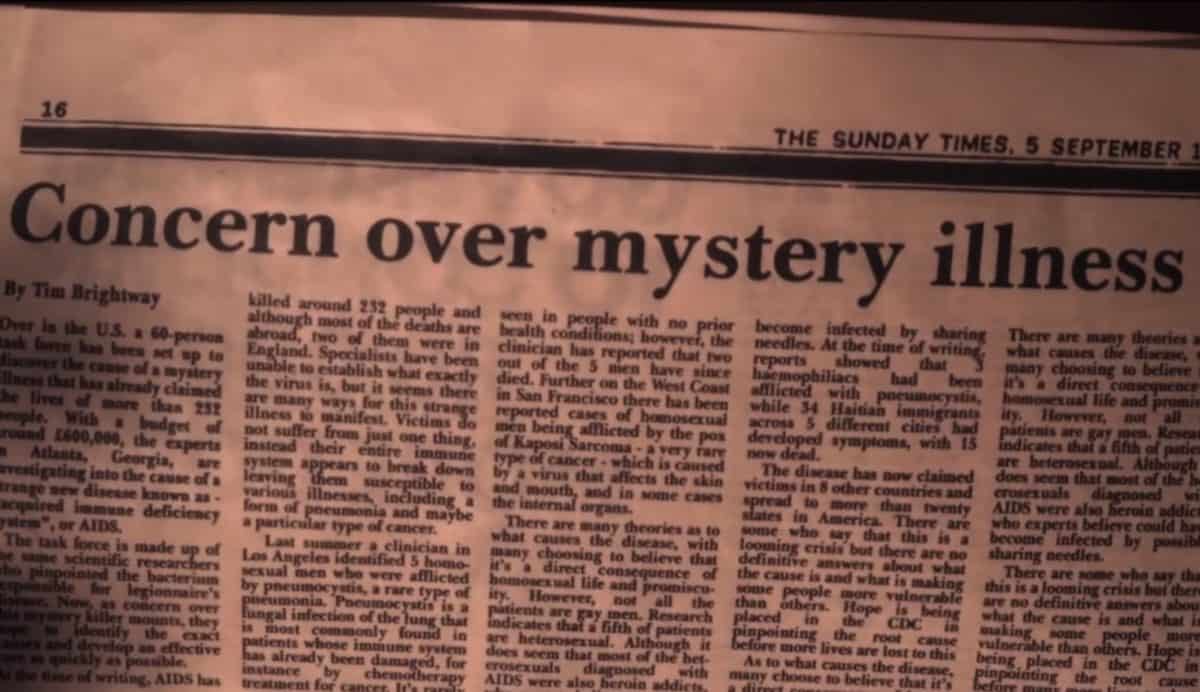 Last week I effortlessly binge watched five hours of what can only be described as an emotional rollercoaster.

A ride that I really didn’t want to get off, but one which I also couldn’t stop myself from finishing.

Because this wasn’t just a new series to devour in lockdown, it was a magical moment shared with the rest of the country.

It’s a Sin was a masterpiece.

After finishing the final episode, along with two boxes of tissues and a bar of Dairy Milk, (ok two bars of Dairy Milk) I lay exhausted on the sofa as the end credits rolled.

Was I in awe of the show? Yes. Was ‘La’ now a part of my vocabulary and had I bought the T Shirt? Yes. Was I in shock? Absolutely!

When I finally wiped my puffy eyes and pulled myself together, 15 hours later, I reached for my laptop and Amazon Primed numerous books about LGBTQ+ history.

Limited knowledge about a shocking past

Because after demolishing this beautiful drama, I had the terrible realisation that I have limited knowledge about a shocking past.

A past which especially as a gay man, I should have known much better.

And frankly, it would be a sin not to rectify that.

Unless you’ve been living under a rock, you would have seen, heard or binged Channel 4’s new hit, It’s a Sin.

A story that perfectly follows a group of friends through a terrible moment in history.

If you do happen to be half-way through it, then what on earth is wrong with you? Finish it already, and then come back to us.

It really is something that we all should see.

Ritchie, Colin, Roscoe, Ash and Jill, become your new group of friends, as Russell T. Davies constructs yet another incredible window into a unique life. This time during the HIV and AIDS crisis in the UK.

Set over a decade that starts in 1981, Davies depicts an era of great music, expressional fashion and terrible tragedy.

In truth, he takes away the sugar coating of the 80’s and gives us a fight that came before our Pride.

And what a heart-breaking fight that was.

I’ll never forget one of the first things my mum said to me when I came out, “…but I don’t want you to get aids!”

At the time, I didn’t really understand her dramatic concern.

I was always careful, wore protection and valued my health.

But I also didn’t understand that she had lived through a moment where shocking events unfolded, as she cradled me in her arms.

Because I, like so many people, had been blissfully ignorant in the severity of the 80s crisis.

It’s crazy (and slightly embarrassing) to think that it takes a popular TV show to highlight a harsh history.

But thank god it did.

People died, innocents were blamed, friends were lost, and people fought to make it better.

Life as a gay man was not the life we live today.

Sure, there are clear similarities in the colourful characters that depict the series.

But now we live in a world where acceptance is slowly coming along, PrEP can be taken to prevent HIV infection and getting the virus is no longer the death sentence it once was.

We are lucky. Incredibly lucky.

And it’s taken Davies, along with a talented cast including Olly Alexander, Keeley Hawes, Callum Scott Howells and Lydia West, to remind me of this.

From the moment the show opens, I’m taken back to the fun times had in going out, drinking and having sex.

We see the fear in the characters eyes as they ignore a ‘new’ virus, perhaps hitting home even harder in the current pandemic.

Then comes the realisation of how serious it was, and the blame that’s placed on gay men.

Through Colin’s innocence we experience the cruelty of the disease and through Ritchie’s denial we relate to the missteps that he takes.

The show oozes powerful moments, like when protestors laid down in the street, stopping traffic and fighting for their friends, taking on police officers.

Davies also gives us Jill. A character based on a real person, and a lady with such a heart, that it puts most of us to shame.

Undoubtably the glue of the series, she never judges and always supports.

From her first moment and infectious smile, to her last, sitting next to a stranger dying alone in a bed. Jill is kind.

And, that’s something in 2021 that everyone should learn a lesson from.

Each beautifully written character tells a story that reflects a time that we are lucky to now be past, but a moment that we should never forget.

A time where luck was everything and for so many, theirs ran out.

So, you see, this was far more than just another TV show.

It’s a reminder of how quick we are to judge, and how important it is to learn. It’s a Win.

And with-it being LGBTQ+ History Month, during these uncertain times that we live in, understanding has never been more important.

I applaud everyone involved in It’s a Sin.

Everybody should watch this and be moved, re-watch it and be angry, ask questions and then strive to do better.

It’s a Sin not too. We still have a long way to go to end the stigma surrounding HIV.

Our history should never be our future.

Related: Why Amazon is set to earn billions from Brexit