We are in the 8th year of the celebrity shoe auction, now the biggest in the world, with more A-listers taking part in our small charity’s fundraiser than Comic Relief. How? Almost a decade ago when I founded Small Steps Project, helping children surviving off landfill sites, Celebrity endorsed charity events and paraphernalia were not […] 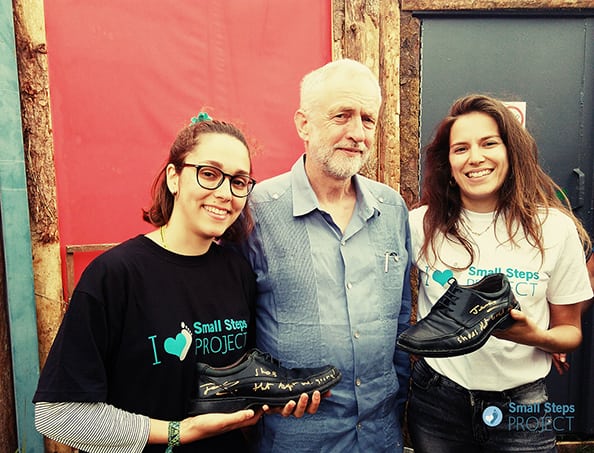 We are in the 8th year of the celebrity shoe auction, now the biggest in the world, with more A-listers taking part in our small charity’s fundraiser than Comic Relief. How?

Almost a decade ago when I founded Small Steps Project, helping children surviving off landfill sites, Celebrity endorsed charity events and paraphernalia were not quite as popular as they are today. Many celebrity events these days cost as much as they raise. The infamous Red Campaign by Bono raised over 100 million, but allegedly only 18 million of that went to charitable causes and it wasn’t the first time. In 2008 Bono’s One Campaign raised £9.6 million, but allegedly gave £118,00 to good causes, which is a little over 1% to charities. And, though it may be hard to believe that appearances are more important than anything to Kim Kardashian, her charity auction on eBay gives away a meagre 10%.

Many of the charity events that celebrities attend see them ‘gifted’ with items amounting to high-end appearance fees. Charity events and paraphernalia, unfortunately, all too often become big business and do exactly what Small Steps set out not to do: create profit out of poverty. So what is different about our auction? For a start the celebrities give us their shoes, which they sign, to authenticate. Sadly there is a black market for celebrity goods. Dealers posing as fans acquire autographs, stick them onto items, which they then sell on as celebrity signed merchandise. So first off all of our items are genuine owned and signed.

Secondly how have we got so many? The simple answer: sincerity. Celebrities are constantly being asked for stuff, and fair enough, we ask them for shoes, but they know that we are a small charity, we are fundraising in-house, no one is profiting from it or them, other than the actual children we support, the money that their shoes raise at auction is spent on projects for children with no shoes at all. There is also a problem with the name charity. The public may not realise that there is a big difference between a delivery charity and a fundraising charity. A delivery charity delivers care directly to beneficiaries, but a fundraising charity is like a bank. It raises and then distributes funds to the delivery charities to work with beneficiaries. And, whilst many claim that every pound goes to charity, they fail to disclose that the interest from donations goes to run their service. Some have even invested in arms and tobacco in the countries, which they are trying to help. Ironically, the richer you get and the less you need, the more free stuff you get. But the poorer you are, the less you get. And fortunately for us the celebrities that take part get it, and recognise the irony. They use their platform and good fortune to help those with nothing. They donate shoes they don’t need which we turn into cash for shoes that others do need. A bit like the Robin Hood of Shoes. Do I sound socialist? Good, I am, and we have Jeremy Corbyn in our auction out of respect, fortunately for us he has become a celebrity. Since 1983 he has been MP for Islington North, where our charity is based, and 3 years ago his shoes raised £59. Now they raise more than £500.

So how does a little charity compete with extravagant gifts and galas? We know from experience that celebrities’ realise we are sincerely raising money only for the people who really need it. And the celebrities we work with really do want to take a small step and make a difference to others, not just their own profile.

Read some praise for the project, below

Jeremy Corbyn
“I wore these shoes throughout my 2015 campaign to become leader of The Labour party, and they made me very strong and stable”

Grimes
“No child should be without a home. Small Steps provides necessities like shoes and emergency kits to children who must scavenge to survive. I hope anyone reading this feels the urge to be involved in changing a child’s life, and you can do so by supporting Small Steps! It’s important that children living in ‘dump environments’ are provided with the care and support they desperately need, and even more important that they receive the education that every child deserves!!! XXXX Grimes”

James Purefoy
“The shoes are worn by my character, Laurens Bancroft, in the show I’ve just done for Netflix called Altered Carbon. It’s a vast sci-fi epic set 500 years in the future. Bancroft is a 350 year-old trillionaire. No problems at all with feeling 350. The trillionaire part, however, is a different matter…”

Adrian Scarborough
“These shoes were the craziest and maddest in my wardrobe and I thought whoever bids for them must be a lover of fun and silliness and that made me feel happy knowing they would go to a good and cheerful home and for such a good cause. Enjoy.”

Mac de Marco
“Anything I can contribute! Real recognizes real.”

Diplo
“I’m donating because this is a great organization and I want to do anything I can to support the kids.”
Shoes worn at Coachella last year during Major Lazer performance.