From the newsletter: Do Newcastle fans bear a moral responsibility to speak out against their new Saudi overlords? 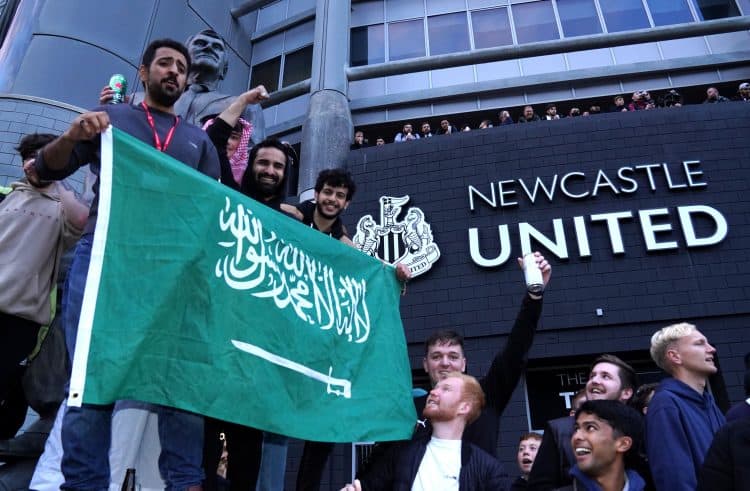 Good morning. Newcastle United has just become one of the richest football clubs in the world. After fourteen years under the yolk of Sports Direct mogul Mike Ashley, there’s a new landlord in Toon. The face of the £300 million takeover is Amanda Staveley, a British businesswoman. But the real muscle comes from further afield: the Saudi-backed Public Investment Fund, Riyadh’s sovereign wealth fund, which is overseen by Crown Prince Mohammed bin Salman.

The deal was presumed completed last summer until television piracy issues and other little niggles – like the fact that a murderous absolute monarchy with one of the worst human rights records on the planet was trying to launder its reputation by buying one of England’s oldest football clubs – derailed it. The Premier League was apparently concerned that the Saudi state might involve itself in the day-to-day running of a club majority-owned by its state-controlled sovereign wealth fund. Those worries – unfounded, I’m sure – have apparently been assuaged.

Cue delight on Tyneside as long-suffering Geordies – some waving Saudi flags, others dressed in thawbs – cried #cans and set sail for St. James’ Park, tongues wagging at the thought of their club revitalised by exotic new investors with some of the deepest pockets on the planet. Cue disgust, too. For this is nakedly an effort by a reprehensible regime to plaster over its crimes. It is sportswashing, plain and simple. The question is: do Newcastle fans hold a moral obligation to reject it?

At first glance, yes. Mike Ashley was bad, sure. But he never ordered a journalist to be assassinated and dismembered with a bone saw. Sports Direct is tacky and its labour practices tawdry, but it has never bombed Yemeni civilians or locked up dissidents. LGBTQ+ people didn’t risk chemical castration when they stepped into House of Fraser. In short: few would be so bold as to argue that the proprietor of a chain of budget leisurewear shops is as bad as Mohammed bin Salman.

But Newcastle fans could justifiably point to Manchester City – owned by Abu Dhabi petrocrats – or Chelsea – owned by an exiled Russian oligarch – and say: why are we any worse than that lot? Ire is probably better directed not at fans craving a bit of Saturday afternoon joy, but the whole festering system of football ownership. This is a plague pit and nobody’s hands are clean. As Democracy for the Arab World Now – a group founded by Jamal Khashoggi before MBS ordered his murder three years ago – put it yesterday: “English football will sell itself to anyone, no matter how abhorrent their crimes, if they offer up enough money.”

Geopolitics, human rights, war: these are strong currents in a vast ocean. Is the onus on Newcastle fans – instead of, say, governments – to swim against the tide? Probably not. But that doesn’t make the unbridled glee of the fanbase any less unsavoury. Supporters’ unequivocal embrace of their new Saudi owners has been, if you’ll pardon the pun, black and white. Asked last year whether they would be in favour of the club being bought out by Riyadh, 97 per cent of respondents to a survey by the Newcastle United Supporters Trust said yes. Still more depressing were the responses to Hatice Cengiz – Khashoggi’s widow – when she urged fans to resist the takeover. “Keep your nose out,” one fan replied. “You’re clearly being used by Amnesty as some sick PR move,” another added. No contemplation here, just ‘us’ – earnest football fans – versus ‘them’ – anyone who wants to deny ‘us’ success.

Ultimately, as Jonathan Liew wrote in the New Statesman last year, the city’s unquestioning embrace of its new owners “is merely an admission of where fans sit in the order of things”. Robbed of any influence, they’ve “plumped for the path of least resistance and maximum gratification”. Football clubs – and the absurd economies they now embody – have moved inexorably away from the communities which created them. This was, perhaps, this broken system’s inevitable endpoint. Newcastle United, the club of Milburn, Robson and Shearer, a newly-minted jewel in Saudi Arabia’s crown – and its fans grinning pawns in an utterly rotten game.