From the newsletter: They're annoying, but history will remember M25-blocking climate activists kindly. 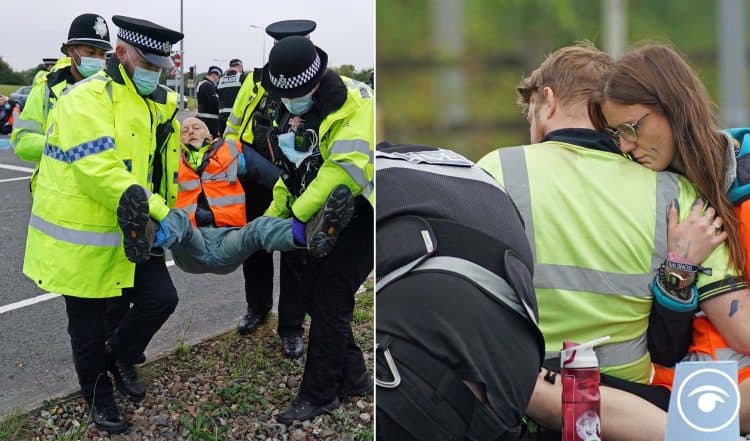 Good morning. Boris Johnson has said the environmental protestors blockading Britain’s motorways are distracting from the “moral mission” of fighting climate change. A further 29 activists were arrested for stopping traffic – for the fourth time – on London’s M25 on Monday. They’re back this morning, returning to the scene of the crime as soon as they are released from police custody.

Insulate Britain is calling for the government to insulate all homes in the country by 2025 – starting with social housing. “Improving the quality of our homes is fundamental to achieve the British government’s climate change, fuel poverty and water reduction targets,” its website explains. Johnson believes “these people” are not doing “any favours to their cause”. Brits seem to agree.

Six in ten adults oppose the motorway protests, YouGov found – and 64 per cent believe the kind of disruption we’ve witnessed over the past two weeks hinders the broader battle of beating climate change. That view is particularly prevalent among older adults, with 73 per cent saying the disruption is bruising public perceptions of the “climate change movement”. Fair enough. But here’s the thing: Insulate Britain could not care less.

The week before the protests began, I interviewed its co-founder, Roger Hallam – a co-creator of Extinction Rebellion (XR). It’s safe to say he isn’t bothered by those who believe his protests are backfiring. XR is “not going to stop because 70 per cent of the British public don’t like it,” he told me. Nor is he sympathetic to those frustrated at having their lives disrupted. In his view, “the public needs to get its shit organised and realise it has responsibilities to its children.”

Johnson said on Monday that the “very important” mission of fighting the climate crisis “is widely shared by the people of this country”. Hallam, unsurprisingly, sees it differently. “I think there’s something slightly cowardly about people saying they agree we’re facing the biggest existential crisis in the history of humanity, and not going into rebellion against the government.”

Hallam believes he is following in the footsteps of Martin Luther King and Gandhi – “hated like hell, then loved again when [the public] realises they were right all along”. Is he right? I’m not convinced. But nor am I convinced whether it matters what I, you or anyone else thinks about Insulate Britain’s disruptive tactics.

That is mainly because their controversial tactics tend to get traction. A small, committed band of activists has already managed to get their demands – which, let’s be frank, are hardly outrageous – printed day-after-day in national newspapers. People are talking about it, and that’s good. Around four million UK households live in fuel poverty, and insulating homes will go a long way to lowering emissions and saving families cash at a time when energy prices are skyrocketing.

Will Brits seriously turn against the idea of having their homes insulated because Insulate Britain is irritating? I don’t think so. If, as Johnson says, the mission of tackling the climate emergency is “widely shared” by the British people, shouldn’t we be happy that some are committed enough to take direct action to drag the conversation forward? Nobody doubts that disruption is frustrating. But, when we look back a decade or so from now, we may remember it much more fondly than this month’s front pages suggest.