From the newsletter: our relationship with 'freedom' is more complex than some would have us believe. 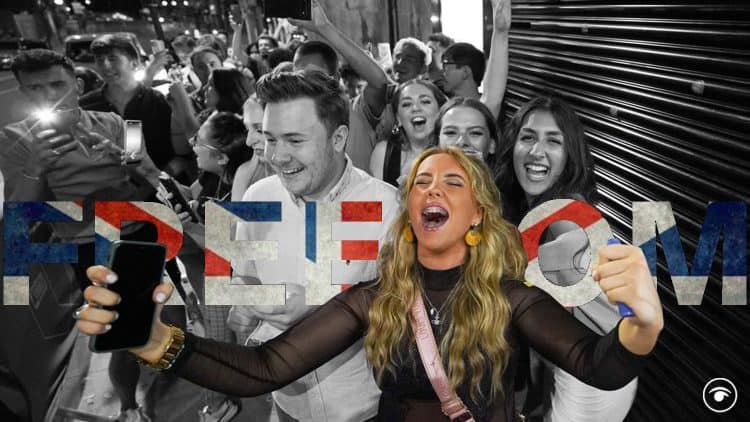 “I need a wee but we’re in the queue. I’ve missed this feeling.”

So said Liam, 24, a warehouse worker from Banbury, as he waited patiently – albeit a bit uncomfortably – to usher in Freedom Day at a London nightclub in the early hours of Monday morning. Liam was one of many people – mostly young, entirely excited, almost certain to have deleted the NHS app – for whom the ending of legal coronavirus restrictions in England clearly could not come quick enough. He and others like him, for whom the fear of getting or giving Covid-19 is dwarfed by the desire to dance, might be the very definition of what Boris Johnson lovingly dubbed “freedom-loving Brits”.

Before we get into the meat of this morning’s Elevenses, a quick point. It has been incredibly depressing – though grimly predictable – to see online reactionaries lash out at young people for doing things that the government has told them they’re entitled to do. People like Liam, queuing for clubs and bars yesterday morning, have borne a disproportionate burden throughout the pandemic. They’ve seen sex and socialising outlawed. Things like working from home, little more than a novelty for some, have deprived them of career opportunities and advancement. Lockdowns haven’t been chances for self-exploration and discovery, they’ve been hours in cramped flats with rubbish wi-fi. Then, when they have the temerity to enjoy the first crumbs of hedonism thrown their way in more than a year, they’re chastised and chided as uncaring super-spreaders. Give them a break.

Anyway, back on topic. Brits and their supposed love of freedom has been an inescapable thread of the country’s Covid conversation. In September, Johnson told us that the UK was recording lower case numbers than places like Germany and Italy because we are a “freedom-loving country”. He has spoken of the “ancient, inalienable right of free-born people of the United Kingdom to go to the pub”. It was inevitable that the final – for now – easing of coronavirus restrictions would become known as Freedom Day, although that perhaps owes more to the red-top press than our red-faced prime minister.

Yet, beneath the bluster, Britons’ apparent obsession with freedom isn’t really replicated in reality. Recent polling by YouGov suggests that fewer than a third of Brits would be comfortable going to a party with lots of other people, despite them now being legal. Only 20 per cent of people aged between 18 and 24 said they’d happily go to a nightclub. Just 31 per cent believe that lifting restrictions yesterday was the “right thing to do”. It’s easy enough to dismiss those numbers as short-term anxiety; Covid cases are spiralling wildly, and nobody wants to get sick.

But it goes beyond that. Polling by Ipsos Mori found that a majority of Brits want restrictions like masks and social distancing to continue until Covid-19 is under control worldwide. A significant minority want personal freedoms restricted permanently. A quarter said that nightclubs and casinos should never reopen; close to two in ten would support an indefinite curfew, forbidding people to leave home after 10pm “without good reason”. Hardly the attitude one might expect of “freedom-loving Brits”.

Instead the pandemic has exposed in us an uncomfortable truth: we have something of an authoritarian streak. Perhaps we as a nation simply do not enjoy the spectre of other people having a good time. Maybe lockdown institutionalised our inherent anti-socialness, giving people carte blanche to opine on the ‘correct’ way to spend your free time. Regardless, this is not a country yearning to cast off the shackles of an intrusive government, as some Tory MPs would have us believe. We’re cautious, judgemental and a bit confused.

Well, except for Liam. Dance on legend.